The Justice Department says Oath Keeper Jessica Watkins helped coordinate with "law enforcement members of the Oath Keepers" to have weapons at the ready on Jan. 6. 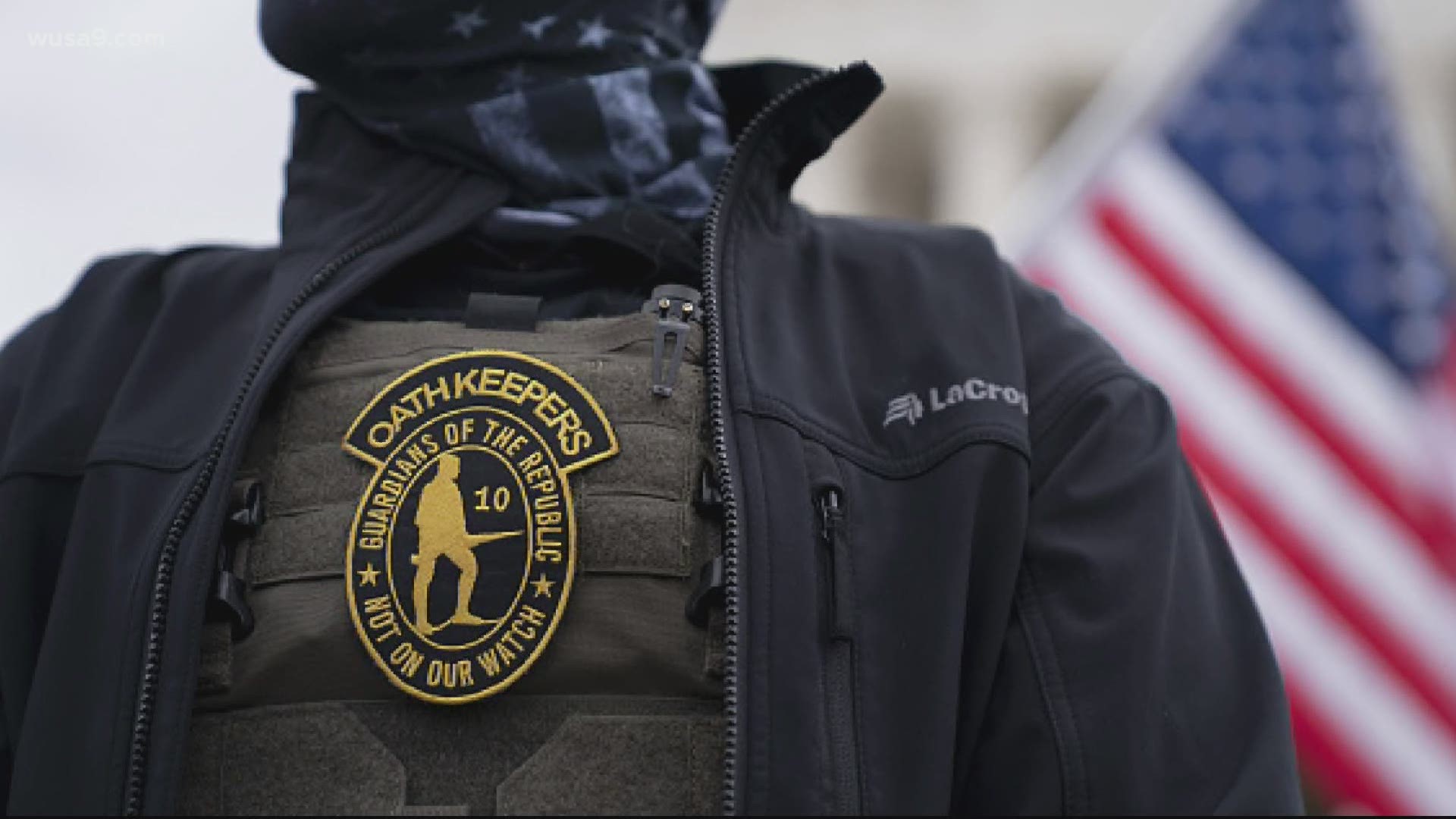 WASHINGTON — Oath Keepers entered the Capitol on January 6 believing they had a "quick reaction force" of law enforcement militia members outside the city ready to supply them with weapons, the Justice Department said in a new filing Wednesday.

In a memo asking that Oath Keepers militia member Jessica Watkins be held without bond, the Justice Department said Watkins undertook “extensive efforts” to recruit and train militia members to participate in the January 6 insurgency – including coordinating with a "quick reaction force" to be stationed outside D.C. – and that she perceived her authorization for the assault on the Capitol as coming from former President Donald Trump himself.

Watkins, an Army veteran, is one of three members of Oath Keepers militia indicted last month on conspiracy charges in connection with the Capitol riot. She and her alleged co-conspirators – Donovan Cowl and Thomas Caldwell – face a range of federal charges, including conspiracy to injure an officer, destruction of government property and violent entry/disorderly conduct.

The government has previously said a search of Watkins’ Ohio home turned up “protective equipment and battle gear,” respirators, pool cues cut down to baton size, zip/cable ties and recipes for making destructive devices. In a new pretrial detention memo filed Wednesday arguing Watkin should be held without bond, the Justice Department says it has obtained further evidence of the steps she took to prepare for January 6.

Those efforts, according to the Justice Department, include recruiting at least two people to attend the event, training Oath Keeper recruits to get them in “fighting shape” and coordinating with a “quick reaction force” [QRF] of “law enforcement members of Oath Keepers” to have weapons at the ready outside of D.C. if necessary.

“If it gets bad, they QRF to us with weapons for us,” Watkins allegedly wrote in communications to other Oath Keepers members. “We can have mace, tasers or night sticks. QRF stages, armed, with our weapons, outside the city.”

Watkins also reportedly told Oath Keepers members to be ready to fight hand to hand, and that “guys outside DC with guns await orders to enter DC under permission from Trump, not a minute sooner.”

🚨NEW: The Justice Department says Oath Keepers militia members entered the Capitol on January 6 believing they had a quick reaction force of "law enforcement members of Oath Keepers" stationed outside D.C. at the ready to supply them with weapons. #CapitolRiot pic.twitter.com/YWTRjwlTiL

Sign up for the Capitol Breach Newsletter. Don't miss an update about arrests, charges or investigations into the assault on the Capitol.

The Justice Department says in the days following the election, Watkins had expressed reservations about coming to D.C, writing to another Oath Keeper that, “Unless the POTUS himself activates us, it’s not legit… If Trump asks me to come, I will.” Prosecutors said in Wednesday’s filing that by the end of December, Watkins has “perceived her desired signal” from the president.

In previous filings, the Justice Department has focused on Watkins’ co-defendant Thomas Caldwell’s alleged leadership role in the Oath Keepers. Caldwell, who the DOJ says was referred to as “Commander” by other militia members, is a former member of the U.S. Navy who is accused of coordinating Oath Keeper activities leading up to January 6. Arguing for his release earlier this week, Caldwell’s lawyer claimed he has held a top secret security clearance for decades and that he even worked as an FBI section chief, although the FBI has not responded to that claim.

On Wednesday, however, the government painted a picture of Watkins as a leader in the militia movement and a “key figure” in the violence at the capitol.

“Watkins and her co-conspirators formed a subset of the most extreme insurgents that plotted then tried to execute a sophisticated plan to forcibly stop the results of a Presidential Election from taking effect,” Justice Department lawyers wrote. “And she did this in coordination and in concert with virulently anti-government militia members.”

“What is more, Watkins was and remains a leader within the broader militia movement. Her texts reveal her extensive efforts to recruit individuals to her militia group and to participate in the January 6 insurgency. Her efforts were successful in recruiting at least two people to attend. Watkins was also responsible for training recruits to get them in ‘fighting shape’ for the inauguration. For individuals interested in attending the events of January 6th, Watkins also coordinated vetting to help ensure the right people were affiliating with The Oath Keepers.

“There is evidence, too, that she was involved in planning for January 6 on national leadership calls, disseminating those plans, and coordinating travel and lodging with other Oath Keeper members that planned to come to Washington D.C. from Ohio and other parts of the country. Watkins was thus not an ancillary player who became swept up in the moment, but a key figure who put into motion the violence that overwhelmed the Capitol.”

On Wednesday, the U.S. Attorney’s Office for the District of Columbia asked a federal judge to order Watkins held without bail, saying that her “extremist anti-government ideology… leads her to embrace to embrace rather than regret her conduct on January 6th” and that she views herself as above the law.

Watkins’ attorney has not yet filed a response to the motion, and no pre-trial detention.

We're tracking all of the arrests, charges and investigations into the January 6 assault on the Capitol. Sign up for our Capitol Breach Newsletter here so that you never miss an update.