The crash happened near a post office in Lafayette and ignited a massive fire. 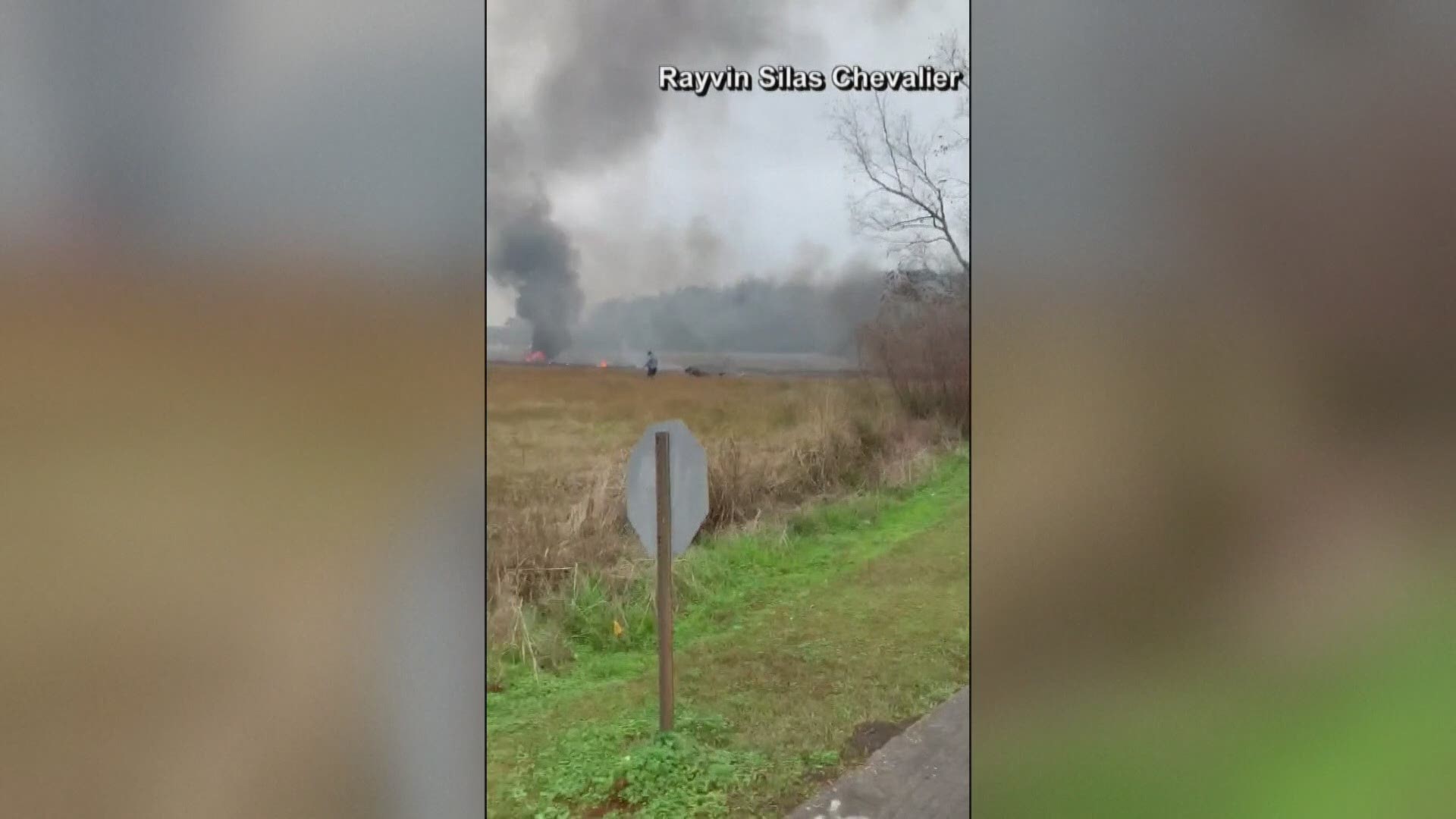 LAFAYETTE, La. — UPDATE: Authorities have identified the five people who died in a plane crash in Lafayette, Louisiana Saturday morning.

Carley McCord, 30, Gretchen Vincent, 51, Michael "Walker" Vincent, 15, Ian Biggs, 51 and Robert Crisp II, 59 were killed when their plane crashed shortly after takeoff from Lafayette Regional Airport just before 9:30 a.m. Saturday. The plane was headed to Dekalb-Peachtree Airport in Chamblee, Georgia, which is just north of Atlanta. Authorities said the group was headed to the Chick-fil-A Peach Bowl football game between LSU and Oklahoma.

A sixth person on board the plane survived. He has been identified as Stephen Berzas, 37, and he was taken to the hospital. His condition is not known at this time.

McCord is a sports reporter for NBC affiliate, WDSU, in New Orleans and is the daughter-in-law of LSU's offensive coordinator, Scott Ensminger. Vincent and her son, Michael, were long-time LSU fans, according to her Facebook page. Crisp is vice president of operations at Global Data Systems where Vincent's husband serves as president. Biggs was piloting the plane when it went down. His LinkedIn profile stated he has been working as Global Data Systems' pilot and aircraft manager for nearly 19 years.

The cause of the crash remains under investigation.

NBC affiliate WDSU in Louisiana has confirmed one of it's employees, sports reporter Carley McCord, was one of the victims who died in a plane crash near Lafayette Saturday.The crash killed four other people on board and left one survivor, who was taken to the hospital in unknown condition.

“We are devastated by the loss of such an amazing talent and valued member of our WDSU family,” said WDSU President and General Manager Joel Vilmenay. “Carley’s passion for sports journalism and her deep knowledge of Louisiana sports, from high school to the professional ranks, made her an exceptional journalist."

“Words cannot express the tremendous amount of sorrow our entire staff holds for Carley and her family,” said WDSU News Director Akili Franklin. “She was an extraordinary woman and a talented reporter. We offer our deepest condolences to her family and friends."

The SEC Network has already posted a message of condolences to its Twitter account as other condolences from around the sports and news world continue to come in.

One person who survived a deadly plane crash near Lafayette has been taken to the hospital. The crash left five others on board the plane dead, according to authorities at the scene.

Credit: ACADIAN COMPANIES
Acadian Ambulance of Lafayette responded to the scene of a plane crash Saturday morning. Five people died and four others were taken to the hospital, including one survivor of the crash and three others who were hurt on the ground. Used with permission via Acadian Companies.

The crash happened just before 9:30 Saturday morning shortly after the plane took off from Lafayette Regional Airport. Authorities said the plane was headed to Dekalb-Peachtree Airport and people on board were headed to the Chick-fil-A Peach Bowl football game between LSU and Oklahoma.

The cause of the crash is unknown at this time. People who live in an apartment building across the street from the scene said their building shook when the plane crashed. The plane also hit a car on the ground and one person in that car was also taken to the hospital. Their condition is not known at this time.

Acadian Ambulance posted on Twitter that it took a total of four people to local hospitals, including the survivor of the crash and three others who were hurt on the ground.

The Lafayette Police Department also asked people to avoid the scene as they wait for investigators from the NTSB to arrive. The crash caused a massive fire that also damaged the post office.

The conditions of those hurt and taken to hospitals is unknown at this time. This is a developing story and we will continue to update you as soon as information becomes available.