About 1,000 students graduated at the in-person ceremony. 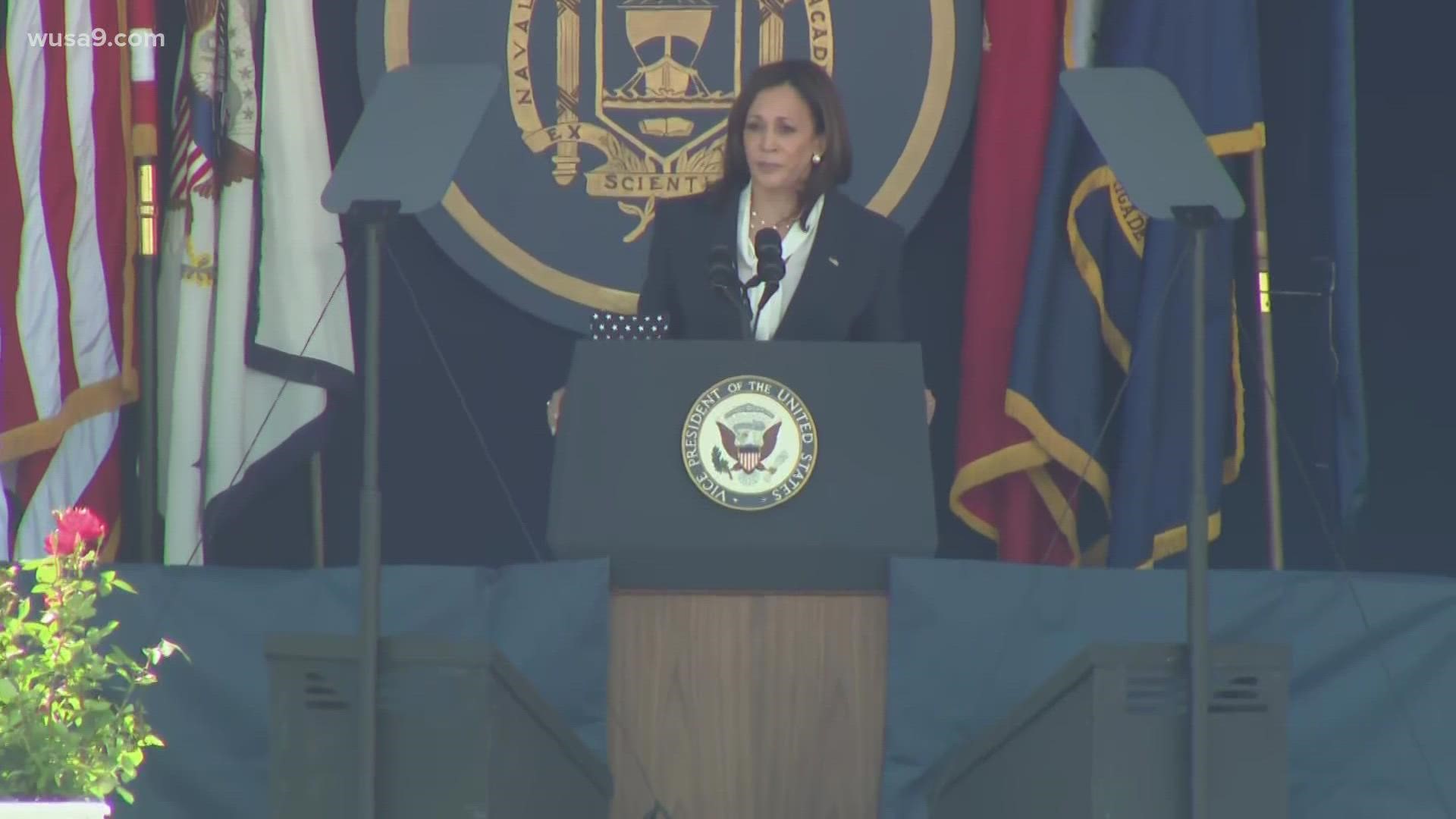 ANNAPOLIS, Md. — Vice President Kamala Harris focused on the challenges of the pandemic, climate change and cybersecurity threats during her keynote speech to graduates at the U.S. Naval Academy on Friday, the first by a woman at the 175-year-old institution.

Harris, the nation’s first female vice president and the first Black woman and person of South Asian descent to hold the office, said the pandemic “has accelerated our world into a new era.”

A pandemic can spread throughout the world in a matter of months, a gang of hackers can disrupt the fuel supply, and one country’s carbon emissions can threaten the sustainability of the Earth, the vice president said.

“This, midshipmen, is the era we are in, and it is unlike any era that came before,” Harris said. “So, the challenge now, the challenge before us now is how to mount a modern defense to these modern threats.”

Harris described the cyberattack earlier this month that shut down the nation’s largest fuel pipeline as “a warning shot” in what the new Navy and Marine Corps officers will be facing.

“In fact, there have been many warning shots, so we must defend our nation against these threats, and at the same time we must make advances in things that you’ve been learning — things like quantum computing and artificial intelligence and robotics and things that will put our nation at a strategic advantage,” Harris said.

In her speech to more than 1,000 graduates, including ones who majored in mechanical, electrical and ocean engineering, Harris described climate change as “a very real threat to our national security.”

“I look at you, and I know you are among the experts who will navigate and mitigate the threat,” Harris said.

Most of the 1,084 graduates were commissioned as officers in the Navy and Marine Corps, including 784 Navy ensigns and 274 Marines as 2nd lieutenants. About 28% of the graduating class are women.

Harris said “the American people are depending on you.”

“We saw this during COVID-19 when Americans watched how members of our military helped vaccinate our nation, because you know biological threats like pandemics and infectious diseases are yet another threat in this era,” Harris said.

Harris marked the milestone of becoming the first woman to give the keynote address at the academy’s commissioning ceremony in the same year that the academy had its first Black female brigade commander, who represents about 4,400 midshipmen.

Midshipman Sydney Barber, who was commissioned as a 2nd lieutenant in the Marines at the ceremony, said it was an exciting and emotional day to graduate with Harris as the speaker. She said she was scheduled to meet with the vice president after the ceremony.

“I plan to thank her for paving the way,” Barber, of Lake Forest, Illinois, said in an interview before the ceremony. “She definitely paved the way for me, inspired me throughout the journey.”