A kindergarten teacher born to teach 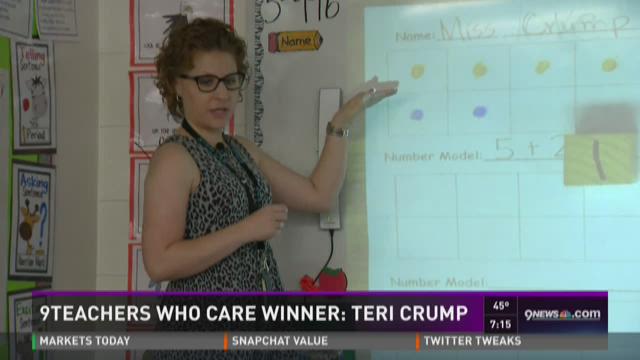 Kindergarten teacher Teri Crump is a natural. Everyone around her at STEM Magnet Lab agrees she was born to teach.

The calling definitely came early in her life.

After just six years in the classroom -- which she refers to as some of the best years of her life -- Crump is being honored as one of the 9Teachers Who Care for the 2015-2016 school year.

"There are so many people that when I got my masters, they said 'Well, now you can go for your doctorate, and you can get your principal's degrees and your license' and I was like, 'No,'" Crump said. "I really want to work with little people. I love my littles."

Crump is affectionate, patient and loving to all of her children like most kindergarten teachers. However, her classes are not typical and can hardly compare to what most of us experienced in kindergarten.

After greeting the children individually each morning, Crump has the children sign themselves in on the smart board at the end of her large classroom. From there, class topics run in 20-minute intervals. After each subject, the children move to a different part of the room where the curriculum changes. It's fast-paced, and the kids are more than focused.

"You have to keep them moving," Crump said. "If you don't you lose them. They want to be busy, busy, busy."

Crump says even at this age, kids are able to take responsibility for themselves. She continuously wraps the "3 Cs" into her curriculum: Composure, compassion and communication.

By the end of the school year, the children have composure down. The 5-year-olds in Crump's class are quiet and respectful.

"Being able to be compassionate is also a huge one for me," Crump said. "I feel kids need to learn how to treat people with kindness and if you don't learn that in kindergarten, it can be a hard thing to instill in them."

The communication piece of the "3Cs" is an impressive piece to this classroom.

Over the course of the year, the students (again, there are just five) learn to work together on large problem-based learning projects.

When the kids were learning about different weather patterns, they brainstormed as to what should be in every family's emergency kit. They students spoke before a panel of adults as to why it's important for families to be prepared in case severe weather hits.

When Crump's class researched animals, they took it a few steps beyond simple information reports on different species.

"My students wrote informational text books and taught people why you shouldn't have wild animals in your house," Crump said. "They also compared how much those kinds of pets cost versus a dog."

"We want to make sure we are solving real world problems so it's not just 'here's some science,' and we stop there," Crump said.

The forward-thinking she's introducing to the children is not going unnoticed.

"She is consistently engaging in conversations with her students," fellow kindergarten teacher Jina Bradford said. "Teri not only supports her students in the classroom but she inspires everyone to be a great citizen outside of the classroom."

"My son Murray was in Ms. Crump's kindergarten class," parent Cristin Premer said. "He always did and still does think of himself as an engineer, a scientist, a mathematician, a reader and an author. She took away any limits he might have had and helped him to confidently see himself as full of possibility and choices."

Crump's principal, John Vigil has known her for a long time. He was her principal when she was in kindergarten. He praises her for not only caring about the kids but also for the parents, the community and her profession.

Of all the accolades Crump has received, she is most pleased to see her children get ready to head off to first grade.

"I want them to always love reading, love writing, love to be scientists and explore, love to be engineers and tinker with things and just be kind little people," Crump said.