For this man, telling Lowry's story is a labor of love

Meet a man preserving the history of Lowry Air Force Base ... one photo at a time. 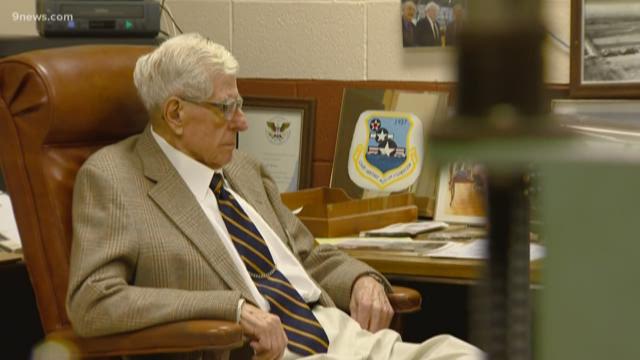 9Who Care winner John Bond’s life was shaped by Lowry Air Force Base. Now in his 90s, John preserves the history of this thriving Lowry community, one photo at a time.

Bond was put in charge of the Air Force Academy Dedication Ceremonies on July 11, 1955 and since that day, has found himself in many leadership roles at Lowry.

A retired Air Force Master Sergeant and IBM employee of 23 years, Bond is now a volunteer historian and photo archivist at Wings Over the Rockies who has written several books about Lowry’s rich history.

The archives, which John meticulously organizes, range from formal military portraits to candid shots of cadet life on the base. Before computers, his method was based on logic, simply filing aircraft photos under "A", images of buildings under "B", and so on.

Each Tuesday and Thursday, you can find John and Wings volunteer George Paxton upstairs in the archive room of the museum, now named after John Bond.

"He’s sweet. I’ve never met anybody as sincere, honest, all those things,” John's co-author and self-proclaimed best friend George Paxton said. “I’ve been around for 86 years, and have met a lot of people and I can’t think of anybody that matches up to him."

For this 9Who Care winner, telling Lowry’s story has become a labor of love.

In fact, love is what holds the top spot for John’s favorite memory of all: Lowry Air Force Base is where he met his wife. The Bonds live in Lowry to this day, just a few blocks away from where their story began.