Biden: 'we are very much alive' after blowout win in South Carolina Democratic primary

It’s a much needed win for Biden, who hadn’t broken through in the previous primary or caucus states. 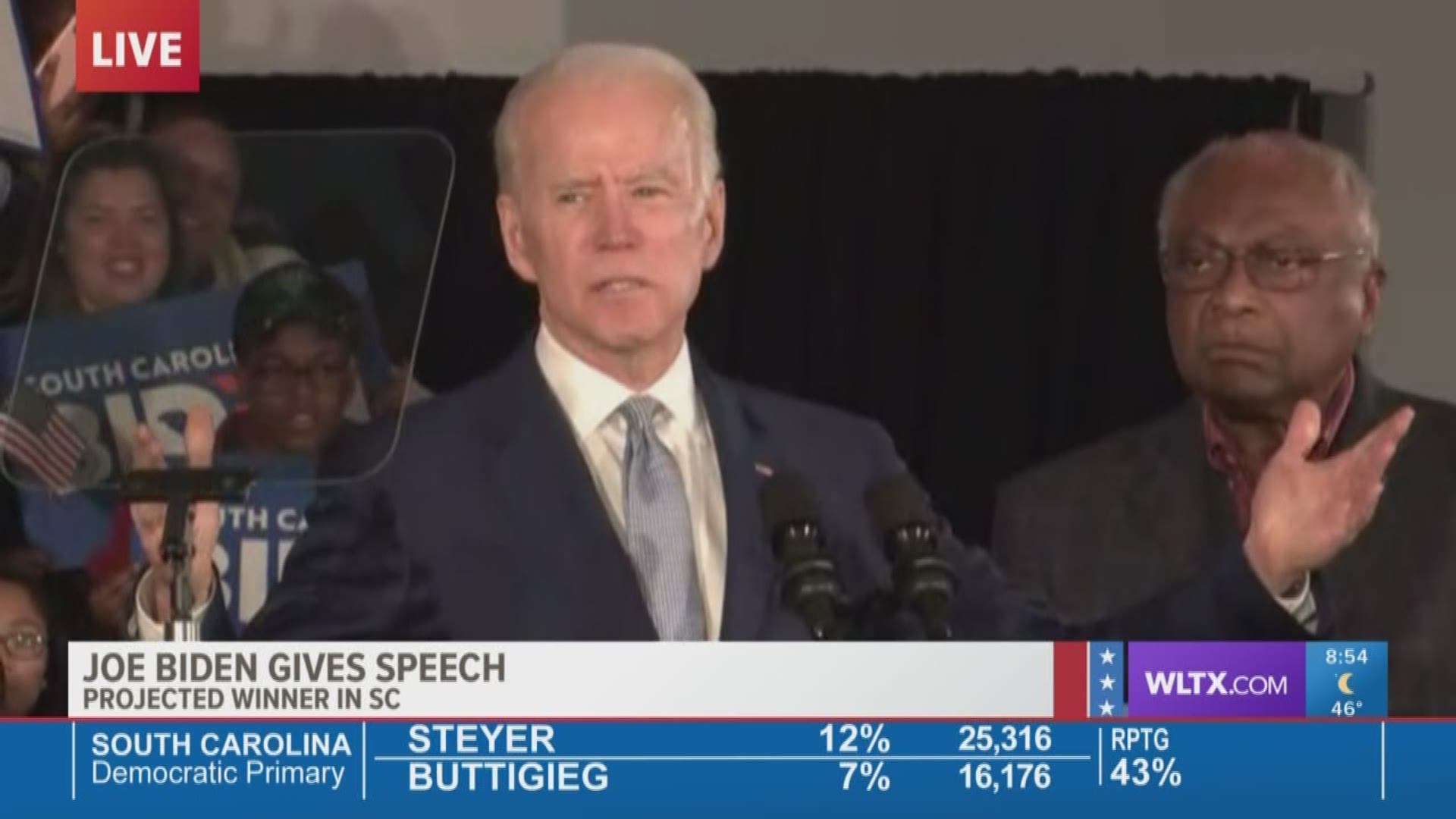 The Associated Press and CBS News called the race shortly after voting ended, based on exit polls that show him with a wide advantage over Bernie Sanders, who finished second. Biden got nearly 50 percent of the vote in a field that had seven active candidates and six inactive ones on the ballot.

It’s was a much needed win for Biden, who hadn’t broken through in the previous primary or caucus states. Instead, Sen. Sanders had emerged as the front-runner, getting clear wins in two of previous contests and a likely win in the disastrous Iowa caucuses.

"To all those who have knocked down, counted out, and left behind, this is your campaign," Biden said. Together, we will win this nomination and beat Donald Trump."

"Just days ago, the press and the pundits had declared this candidacy dead. Now, thanks to all of you, the heart of the Democratic Party, we just won and we won big. And we are very much alive."

"This is the moment to choose the path forward for our party," Biden said. "I believe we can beat Donald Trump."

Sanders, speaking at a rally in Virginia, was defiant, seemingly taking a swipe at Biden.

"Old fashioned politics, the 'same old, same old' type of politics that doesn't excite anybody, that doesn't energize anybody — that is not going to be the campaign that beats Trump," he told his crowd.

It now sets up a very interesting scenario for next week’s Super Tuesday, where over 1,300 delegates—more than a third of the total delegates available in the primary process—will be up for grabs. A total of 14 states and one territory will vote.

Biden’s campaign had long considered South Carolina his “firewall” and it appears that buffer held. South Carolina is different in many ways from the previous primary states, none more striking than demographics. In the Palmetto State, unlike Iowa, New Hampshire, or Nevada, a majority of Democratic voters are African-American.

Biden had always enjoyed broad support from that group in polls conducted here going back nearly a year.  But recent surveys had shown some of that support eroding. It appeared Sanders was a big beneficiary, as was billionaire Tom Steyer, who's spent heavily on ads in the state. Both men saw seen a spike in support from black voters.

RELATED: Why was the South Carolina primary called for Biden so early?

But two surveys done in the last week showed Biden with an advantage. Another thing that helped, it appears: a last minute endorsement by Rep. Jim Clyburn, an African-American from South Carolina who’s one of the most powerful Democrats in Washington. In exit poll data released Saturday evening, almost half of primary voters said Clyburn's endorsement of Biden played an important factor in their vote today. Clyburn and Biden have known each other for decades.

"My buddy Jim Clyburn, you brought me back!" Biden told him.

Most respondents (51 percent) said they wanted to return to former President Barack Obama's policies. A much smaller number, 29 percent, said they wanted there to be more liberal policies. Sanders, a self-described Democratic-socialist, is considered far more ideological liberal than Biden.

Over half (53 percent) said they preferred the nominee to be someone who could beat President Trump in November.

There was one casualty of the night: Billionaire Tom Steyer announced he was ending his campaign after the results began to come in.