Many expressed a desire for legislation that would provide permanent protection for people who came to the country illegally as children. 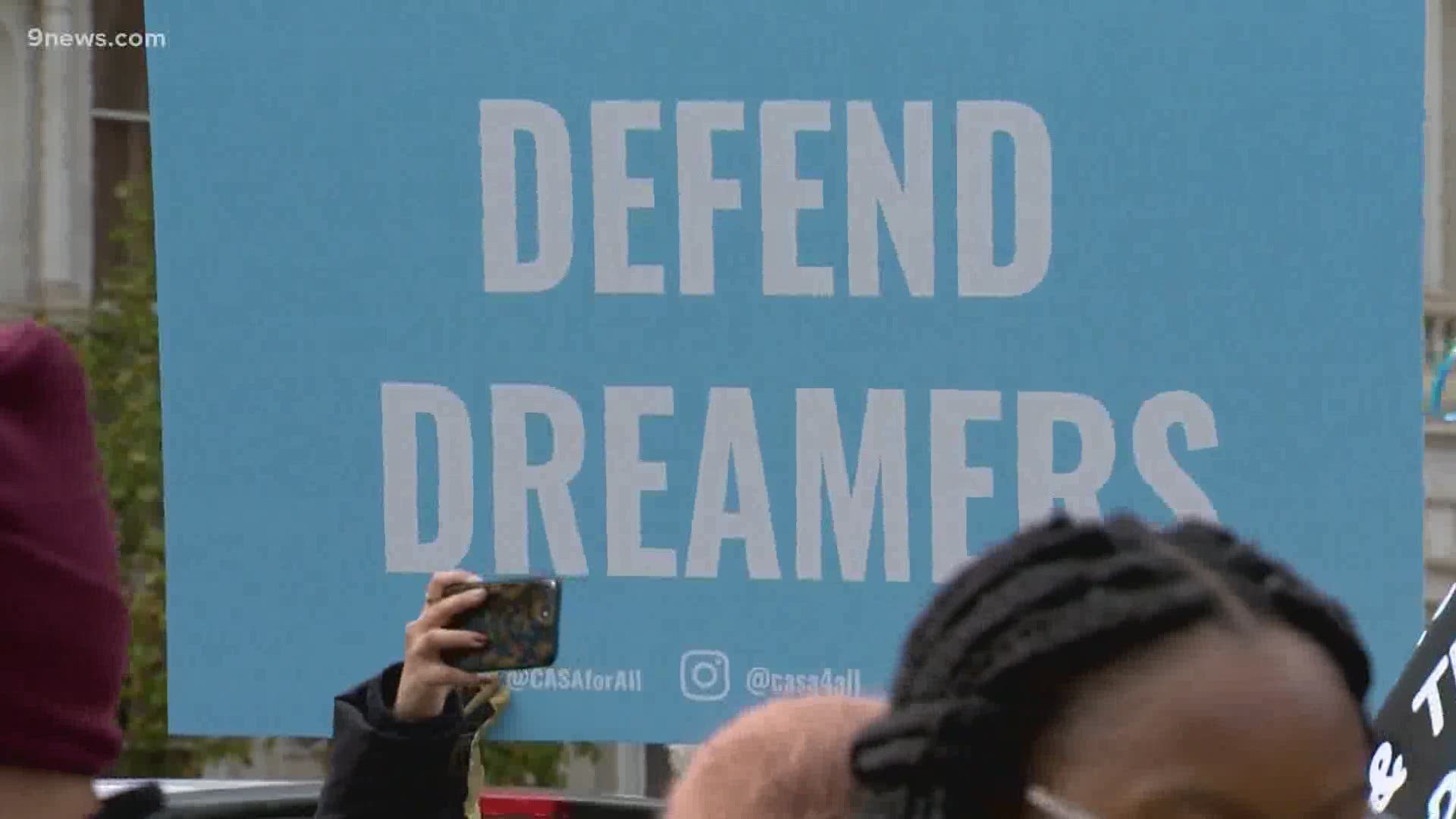 COLORADO, USA — Several Colorado politicians have offered their opinions in reaction to the U.S. Supreme Court's ruling on the Deferred Action for Childhood Arrivals program (DACA), which allows hundreds of thousands of people who came to the U.S. illegally as children to stay in the country.

In a 5 to 4 vote, the Supreme Court rejected the claim by the Trump Administration that the program is illegal and that courts have no role to play in reviewing the decision to end it.

“Here in Colorado, we know our immigrants make our state, and our country, a stronger and a better place to live," said Democratic Colorado Governor Jared Polis. "Immigrants enrich our communities. I am thrilled that the thousands of DREAMers in Colorado will no longer be forced to live in fear and am glad the court made the right decision, although we still need Congress to act and create a pathway to citizenship. This is a historic moment for our country. Now is the time for the federal government to work together on bipartisan comprehensive immigration reform.”

“I applaud the Supreme Court’s decision to protect thousands of Dreamers living in Colorado, in the only country they’ve ever known as home, said Weiser.

“I will continue to defend and support our Dreamers, and I urge Congress to finally pass legislation to allow Dreamers to stay in the United States and provide them with a pathway to citizenship. Today’s decision by the Court follows in the best of our nation’s commitment to liberty and justice for all.”

In a release, Weiser's office notes Colorado was one of 21 states and the District of Columbia that challenged the federal government’s decision to end DACA.

Latino and Black caucuses of the Colorado legislature

The Latino and Black caucuses of the Colorado legislature also agreed with the Supreme Court's decision:

“The Trump Administration’s decision to end the DACA program was a cruel and unjust betrayal, and it would have destroyed the lives of thousands of Colorado families. Dreamers make up the fabric of this state and this country. Today’s Supreme Court decision is historic and welcome news that will allow our country’s DREAMers to continue living and working in their communities without fear.

“We urge Congress to quickly pass legislation to establish permanent protections and a pathway to citizenship for all DREAMers. Furthermore, we denounce any attempt by the administration to continue using DREAMers as a bargaining chip in negotiations over immigration reform and the president’s border wall. We stand with DREAMers!”

Republican Colorado Senator Cory Gardner said that there needs to be a long-term solution:

“While today’s decision provides some clarity for the thousands of DACA recipients who call Colorado home, Congress still needs to reach a long-term solution for Dreamers in the United States—including a pathway to citizenship,” said Gardner. “That’s why I support immediate passage of the Dream Act and would also support the House-passed Dream and Promise Act. The Senate should act quickly to provide permanent relief for Dreamers. I will continue to work across the aisle with my colleagues in Congress to deliver certainty for Dreamers in a way the Court cannot.”

Democratic Colorado Senator Michael Bennet agreed with the decision but said there is more work to be done:

“The Supreme Court’s ruling against the Trump Administration’s repeal of DACA will protect the legal status of nearly 750,000 young adults, Bennet said.

“Dreamers came here as children and have known no country but America. They grew up in our neighborhoods, played on our sports teams, and served on our student governments. They showed up to school, found jobs, and pay taxes. They are woven into the American fabric.

“In 2012, Dreamers came forward at the request of our government to seek legal protection from deportation. They put their faith in us to keep our word and protect them and their families. President Trump betrayed that trust and tainted the character of our nation.

“Today, the Supreme Court rebuked his betrayal. And now Congress must keep the government’s promise to Dreamers and pass the bipartisan American Dream and Promise Act to give DACA recipients a path to citizenship.

“We also, once again, must refocus on the urgency of comprehensive immigration reform. As a member of the Gang of Eight, I know it is possible to put forward bipartisan legislation with a broad coalition of support—from immigrant advocates to agricultural producers. Using the Gang of Eight framework, we could protect Dreamers, secure our borders with 21st century technology, support seasonal workers and business owners, and create a pathway to citizenship for 11 million undocumented immigrants.

“Today’s decision is a step in the right direction, but we have more work to do to fulfill the promise of American citizenship to those who seek and deserve the benefits of it.”

Democratic Congressman Ed Perlmutter praised the ruling but also agreed that a permanent solution is needed:

“Today’s Supreme Court ruling upholds our nation’s values and reaffirms the U.S. as a nation of immigrants and opportunity, Perlmutter said. “In Colorado, we know Dreamers are our friends, neighbors, classmates, colleagues, job creators and small business owners who make important contributions to our economy and enrich our society every day. And during the COVID-19 public health crisis, Dreamers have been essential workers on the frontlines helping to take care of our sick and keep our country running.

“With today’s ruling providing only temporary relief, it’s more important than ever that the Senate passes the Dream and Promise Act to ensure these young Americans can continue living their lives in the only home they’ve ever known.”

"This is a huge victory in our fight to ensure nearly 700,000 immigrants have their shot at the American dream. Now, let's give our Dreamers the pathway to citizenship they deserve. #HereToStay #HomeIsHere"

“The Supreme Court’s decision today reaffirms that the American dream is alive and well, and that home is and will remain here for hundreds of thousands of young students and workers who are contributing to our economy and our nation every day, many serving in essential roles in health care, child care and elsewhere to serve our society in the midst of a global health emergency, said Neguse.

“Today we reaffirm as a nation, that we will not stand for President Trump’s cruel and unjustified efforts to deport countless young people. The opportunity that my parents were able to receive in America when they immigrated from Eritrea, and that my sister and myself were able to receive as a result, is incalculable. We must continue to fight to ensure that immigrants who come to our shores and our borders can seek these same opportunities.

“We must continue to fight to ensure permanent protections for Dreamers, to uphold our American values as a nation of refuge and opportunity, and to reject the dangerous immigration policies this President continues to push.”

In a tweet, Democratic Congressman Jason Crow said the decision was cause for celebration:

This is HUGE news. For 700,000 Dreamers across the country, home is here. The Supreme Court just declared that this is the law of the land! Today, let’s celebrate with our families. Tomorrow, let’s get back to work to modernize our immigration system.

“The Supreme Court has spoken and has stopped the President from ending the DACA program and deporting thousands of young people who have known no other country but the United States of America, Hancock said. "Our Dreamers are some of the most determined and courageous people in the country. They are an integral part of our workforce, they are teachers, students and members of our military. And even now they remain determined and continue to make contributions to our communities through their courage, their belief and their hope – even as they live in uncertainty. This ruling is a victory for decency and the American Dream over fear and hate. We will continue to stand by the 9000+ Dreamers who call Denver home, and we urge DACA recipients to continue to renew their status and Congress to enact permanent protections for Dreamers and their families.”

RELATED: What is DACA? | Answering 10 of the most-searched questions on the Supreme Court ruling

Republican Congressmen Ken Buck, Doug Lamborn and Scott Tipton have not released statements as of the time of this writing. We will be sure to include any statements we receive from them should they decide to do so.