DENVER -  Voters in Colorado fired one of the two district court judges who failed their official reviews in 2016. 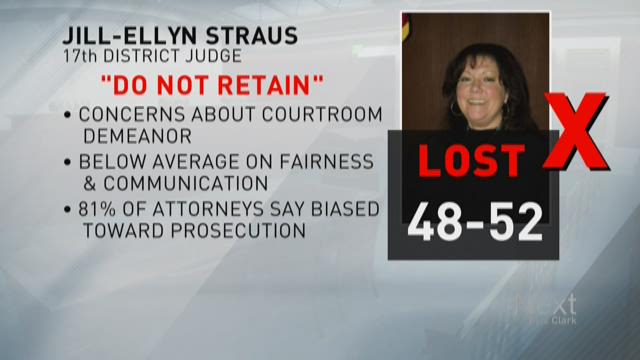 DENVER - Voters in Colorado fired one of the two district court judges who failed their official reviews in 2016.

Judge Jill-Ellyn Straus will lose her job as judge in the 17th judicial district (Adams & Broomfield counties) when her current term on the bench ends in January.

As a 9NEWS investigation exposed earlier this year, it’s a rare thing for judges to lose elections even with bad reviews. Of the last ten judges who earned a “do not retain” recommendation before 2016, only three lost their jobs.

On average, judges with failing reviews won their retention elections, earning 54 percent of the vote.

Bucking that trend, 52 percent of voters decided to give Straus the boot. Her review flagged concerns about her demeanor in court and gave her poor marks on fairness and communication.

The other Colorado judge to earn a “do not retain” recommendation in the state’s official voter guide kept his job.

Fifty-seven percent of voters in Southeast Colorado chose to keep 16th district (Bent, Crowley, and Otero counties) judge Michael Schiferl -- despite a review that found he appeared to be chummy with the people in his courtroom along with poor legal writing and a lack of willingness to accept constructive criticism.

Fewer than 8,000 voters cast votes in Schiferl’s more rural district. More than 177,000 cast votes on the question of retaining Straus.

After the election results are certified, the state will post a job opening for the judge position currently occupied by Straus.

A committee will choose up to three applicants to recommend to Gov. John Hickenlooper (D-Colorado,) who will choose the new judge from among them.

Applicants must have practiced law in Colorado for at least five years and live in the 17th district.