Scroll below for updates throughout the day 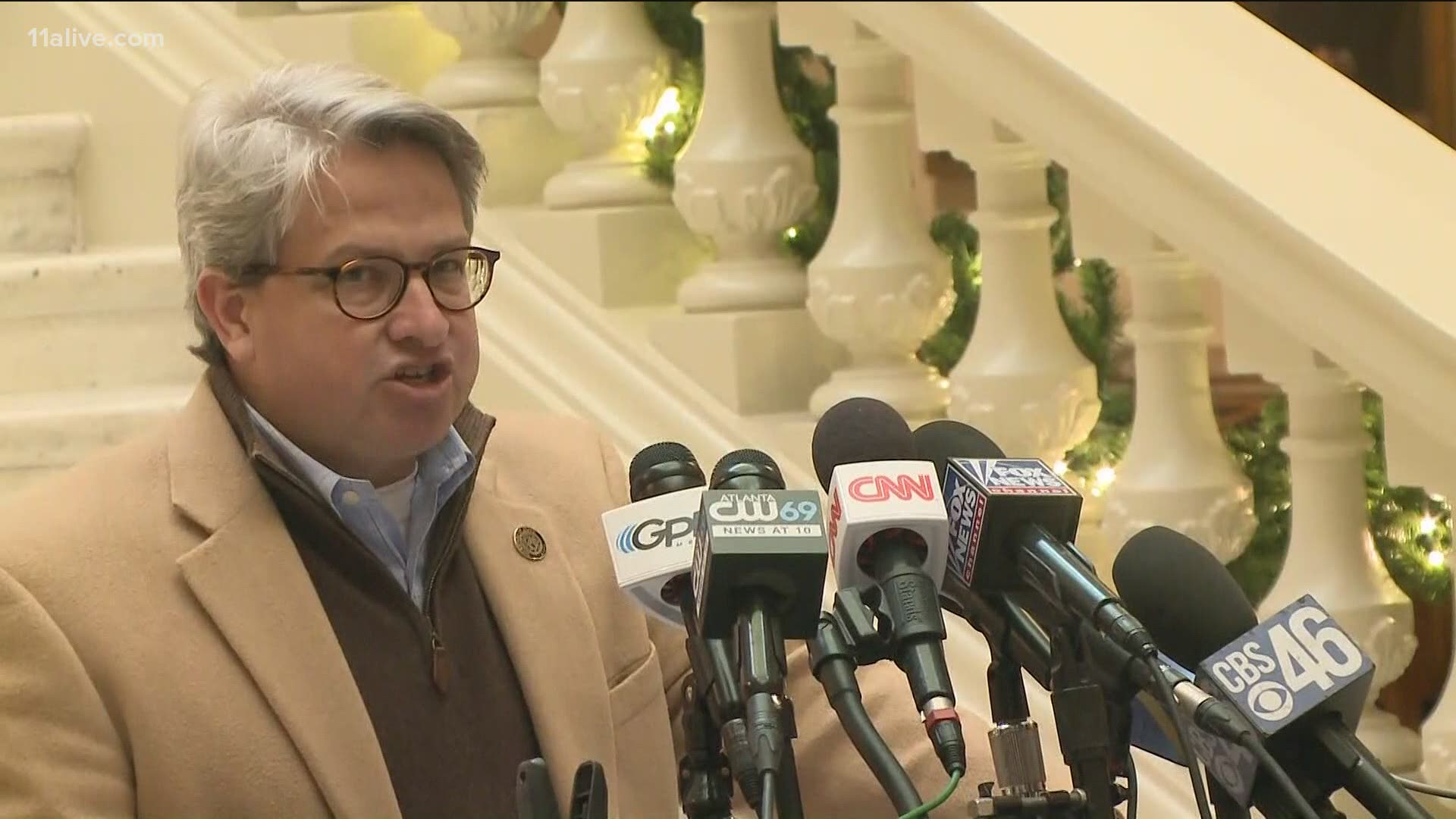 ATLANTA — Georgia began counting its votes for the third time last week. Many counties paused for the Thanksgiving holiday and will pick up today. This official recount came nearly three weeks after Election Day.

Joe Biden won Georgia by more than 12,000 votes, when its results were finally certified, following a roughly weeklong hand-count audit of all of the state's 5 million votes.

Following the hand audit, the Trump campaign requested an official recount of ballots. In Georgia, candidates losing by 0.5% or less are entitled to request a recount after election results have been certified.

Throughout the day, we’ll update this blog with new information from the counties as they continue the tally along with other election updates.

(Note: All times are Eastern)

"It has all gone too far," Sterling said Tuesday afternoon, commenting on some of the threats election workers have received.

Trump claims this was a "rigged election". However, election officials have repeatedly said there is no evidence of widespread fraud.

Twitter also put a disclaimer on the president's tweet, saying "this claim about election fraud is disputed."

Rigged Election. Show signatures and envelopes. Expose the massive voter fraud in Georgia. What is Secretary of State and @BrianKempGA afraid of. They know what we’ll find!!! https://t.co/Km7tRm2s1A

“There is absolutely no place for violence in our democracy, and it is beyond time for Kelly Loeffler to put an end to the dangerous attacks she and President Trump are making on our elections - including members of her own party. I again ask Senator Loeffler to join me in standing up for Georgia voters, our elections and to stop putting her own political interests ahead of Georgia.”

7:05 p.m. | Georgia Attorney General Chris Carr is condemning threats made against election workers and Secretary of State Brad Raffensperger. He tweeted that his office has been investigating those made against Raffensperger and his family.

"We will continue to stand with local, state and federal officials to say violence of any kind has no place in Georgia," the tweet reads.

(2/2) Our office has been active in investigating those made against @GaSecofState and his family, and we will continue to stand with local, state and federal officials to say violence of any kind has no place in Georgia.

“Like many officials, as someone who has been the subject of threats, of course Senator Loeffler condemns violence of any kind. How ridiculous to even suggest otherwise. We also condemn inaction and lack of accountability in our election system process—and won’t apologize for calling it out. Senator Loeffler will continue fighting to ensure we have a fair, trusted, and accurate election because the future of our country is at stake.”

5:50 pm | Sen. David Perdue's communications director, John Burke, sent 11Alive a statement via email late Tuesday afternoon that said while the senator would not apologize for "addressing the obvious issues with the way our state conducts its elections," Perdue "condemns violence of any kind, against anybody. Period."

"Senator Perdue condemns violence of any kind, against anybody. Period. We won’t apologize for addressing the obvious issues with the way our state conducts its elections," the statement said. "Georgians deserve accountability and improvements to that process — and we’re fighting to make sure the January 5th election is safe, secure, transparent, and accurate."

5:45 pm | Stacey Abrams called out Georgia senators Kelly Loeffler and David Perdue on Twitter for their silence in relation to the threats of violence against election workers.

"Fair Fight and I condemn in the strongest terms possible all threats against election workers, contractors, and election officials," Abrams' tweet said, in part. "Kelly Loeffler and David Perdue, who echo election conspiracies without evidence and contribute to the culture of intimidation and fear, should join us in condemning those who engage in these despicable acts."

Kelly Loeffler and David Perdue, who echo election conspiracies without evidence and contribute to the culture of intimidation and fear, should join us in condemning those who engage in these despicable acts. Georgians deserve better from their leaders than self-serving silence.

This followed angry comments from Gabriel Sterling during a Tuesday afternoon news conference.

"It's all gone too far," Sterling said with a raised voice during the news conference. "All of it."

5:40 pm | According to Gabriel Sterling of the Georgia Secretary of State's office, 91 of Georgia's 159 counties have completed their recount of ballots from the Nov. 3 election for president.

The deadline for completing the recount is midnight Wednesday.

5:15 pm | Marcia Ridley, Elections Director of Spalding County, responded to the request from Secretary of State Brad Raffensperger for her ouster due to what he called "serious management issues and poor decision-making" during the Nov. 3 general election.

In a statement forwarded to 11Alive late Tuesday afternoon, Ridley said her decision to use provisional ballots on Election Day when machines at the county's 18 precincts were not working was "made according to the law promulgated by the Secretary of States in emergency situations."

She said that later in the day, Dominion sent technicians to all of the precincts in the county to resolve system issues.

She said that she was initially told there may have been an update performed the night before Election Day and that Dominion would be investigating to determine the cause of the computer malfunction.

Following an investigation, Dominion indicated that no system can be updated without their knowledge.

"My office verified the data that was sent relating to the absence of an update by reviewing the Poll Book voter log files which indicated that the last voter file update to the pollbooks was done after the completion of Early Voting, on Saturday the 31st of October," Ridley said. "Therefore, the investigation by Dominion has ruled out the possibility of an update on the night before the 2020 Presidential Election."

Ridley went on to say that Spalding County Board of Elections and Registrations Chair Margaret Bentley indicated that she fully supports Ridley and has "no intention of asking for her resignation."

3:35 pm | Gabriel Sterling of the Georgia Secretary of State's office angrily denounced the actions of those who have been making threats against workers in the secretary's office have to stop.

"This has to stop," Sterling said.

Multiple individuals have attacked the integrity of workers in the secretary's office as well as others who said the Nov. 3 election process had been well run. President Trump on Sunday insisted that Gov. Brian Kemp should intervene on behalf of his campaign, saying the election was fraudulent.

Joesph diGenova, former U.S. Attorney for the District of Columbia, speaking on a talk show on Monday, said that former federal cybersecurity official Chris Krebs should be "taken out at dawn and shot."

Krebs was fired by President Trump after saying that the Nov. 3 election was the most secure in American history. Trump disagreed, calling Krebs' statement, "highly inaccurate."

"Mister President, Senators (David Perdue and Kelly Loeffler), you have not denounced this," Sterling said, continuing. "You have lost the moral high ground in this entire discussion."

3:30 pm | Gabriel Sterling of the Secretary of State's office is speaking to reporters to update the status of the recount.

3:15 pm | Secretary of State Brad Raffensperger and Georgia state legislators from Spalding County are calling for the resignation or termination of county election supervisor Marcia Ridley after examples of "serious management issues and poor decision-making" were uncovered during the Nov. 3 general election.

In a release, Raffensperger said, "County elections officials are responsible for ensuring the voting process is smooth and efficient and must take responsibility when they fail."

Problems with voting machines at precincts in Spalding County early on the morning of Election Day, resulted in voters there facing long lines and being forced to use provisional ballots for more than two hours.

On Nov. 3, Ridley told 11Alive the people who make the voting machines caught the issue at 7:05 a.m. and a technician had to go to each precinct to reset the poll pads.

2:30 pm | Attorney Gen. William Barr said Tuesday the Justice Department has not uncovered evidence of widespread voter fraud that would change the outcome of the 2020 presidential election.

His comments come despite President Donald Trump's repeated claims that the election was stolen, and his refusal to concede his loss to President-Elect Joe Biden.

12:50 pm | President Trump filed a lawsuit in the Wisconsin Supreme Court Tuesday, seeking to disqualify more than 221,000 ballots in that state's two most Democratic counties.

Trump lost to Biden in the Badger State by nearly 20,700 votes.

The filing came one day after the state certified President-Elect Joe Biden the winner of the state's 10 Electoral College votes.

With the GOP holding a narrow 50-48 majority in the Senate, the outcome of the two races could potentially reverse the balance of control in the chamber.

11:55 am | Fulton County Commissioner Robb Pitts bristled at criticism of the workers processing the election recount for the county by Secretary of State Brad Raffensperger, along with others, including President Donald Trump.

During a statement at the Georgia World Congress Center, where recount efforts continued Tuesday morning, Pitts angrily spoke to the media about Raffensperger's statements earlier in the morning.

"Either put up or shut up," Pitts said. "I'm sick and tired of folks who don't know what they're talking about."

11:20 am | Fulton County Commission Chair Robb Pitts will make a statement at 11:30 am from the Georgia World Congress Center from the vote recount site “in response to the Secretary of State’s news conference earlier this morning,” according to a county spokeswoman.

10 am | In their morning briefing, the Georgia Secretary of State's office said nearly 50 of the state's 159 counties had completed their recount.

The largest county still outstanding, according to the secretary, is the state's most populous county -- Fulton County -- which, he said, is where problems still exist.

Raffensperger said Fulton is running only eight out of 17 high-speed scanners because of staffing issues.

"We're tired of waiting on Fulton and their dysfunction," the secretary said.

Fulton County election officials said they plan to scan until 11 p.m. Tuesday, then return on Wednesday to complete their process before the midnight deadline.

Raffensperger said Fulton's will be a "dramatic finish," but not in a complimentary way.

Gabriel Sterling, of the secretary's office, said that the state's new paper-based voting system actually proves the election was secure.

.@GabrielSterling says paper based voting system — new for Georgia — proves the election was secure. He said “they keep moving the goal posts.,” adding “to continually have it questioned in ways that are not specific...we don’t like the outcome, therefore you should investigate.”

Detractors, he said, "keep moving the goal posts," however. He was referring to critics, who continually bring up non-specific and non-direct evidence of voter irregularities and so-called conspiracies in Georgia's voting system: "To continually have it questioned in ways that are not specific...'we don't like the outcome, therefore you should investigate.'"

9:30 am | Georgia Secretary of State Brad Raffensperger is speaking to reporters Tuesday morning in Atlanta.

The secretary, along with Gov. Brian Kemp, has been under ongoing pressure from President Donald Trump for not intervening in the election and recount in Georgia on his behalf.

On Sunday, Trump, in an interview on Fox Business, excoriated both Raffensperger and Kemp, saying they oversaw a fraudulent election in Georgia.

The president told interviewer Maria Bartiromo that he was "embarrassed" that he had endorsed Kemp during the 2018 campaign.

Kemp responded on Monday, saying that the secretary of state oversees elections in the state of Georgia he was prohibited by state law from intervening in the election.

Along with Kemp, Raffensperger is a Republican in an elected state office.