Lauren Boebert is best known as the owner of Shooter’s Grill in Rifle, where the staff openly carry firearms. 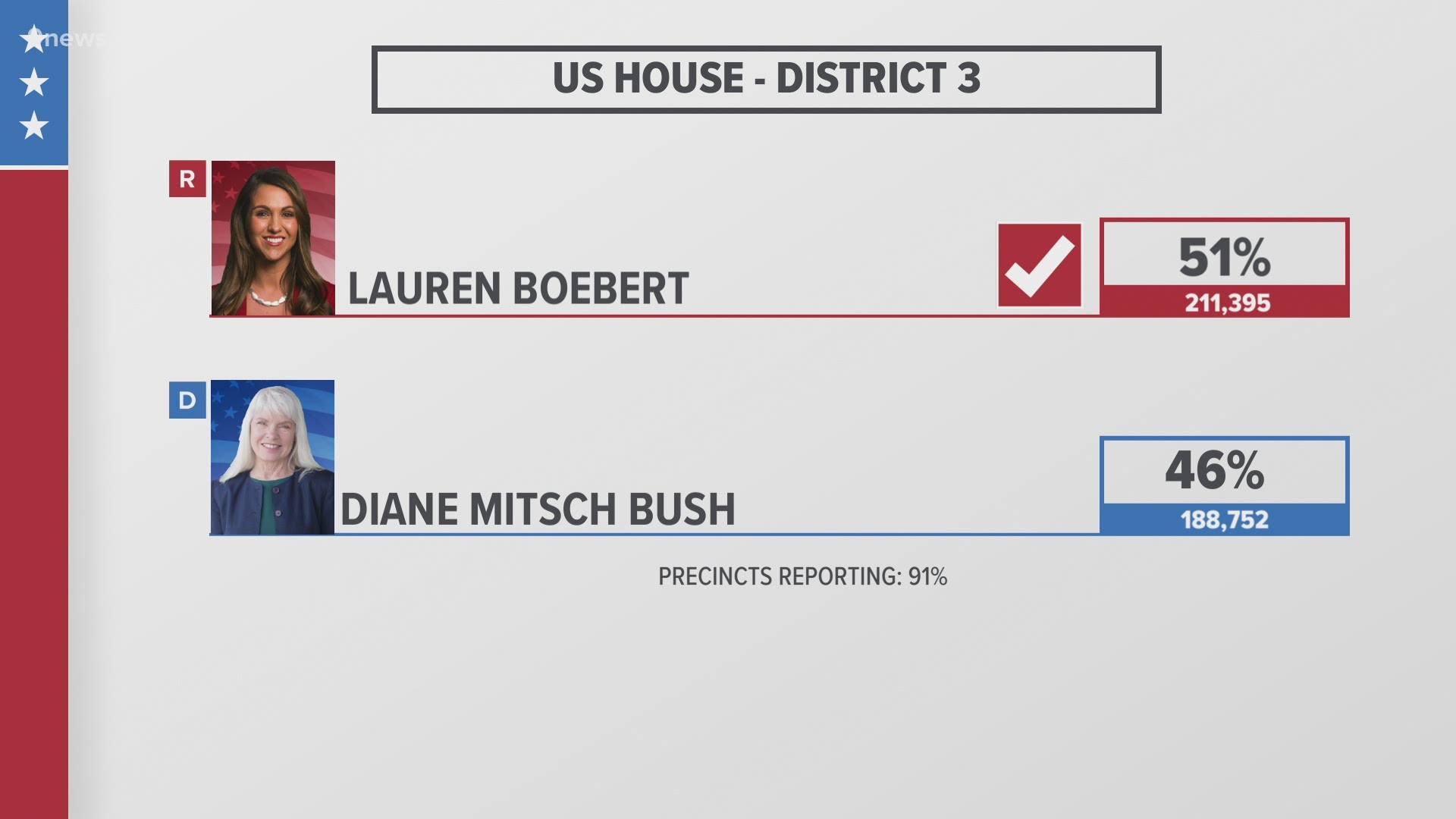 DENVER — Political newcomer Lauren Boebert has defeated Democratic challenger Diane Mitsch Bush in the race to represent Colorado’s 3rd Congressional District, which covers the Western Slope and southern Colorado, according to the latest projection from The Associated Press.

The Associated Press called the race at 7:21 a.m. As of this writing, Boebert is leading Mitsch Bush by a 51% to 46% margin.

Boebert, who owns the Shooters Grill restaurant in Rifle, where staff openly carry firearms, defeated Republican incumbent Scott Tipton in the primary. Boebert said she was running to “annihilate socialism” and give Republican voters a more vocal and confrontational Trump-style populism.

“I am so proud and so honored to announce that I will be the first mom representing Colorado’s 3rd Congressional District,” Boebert said in her campaign victory speech. “There is so much in the United States Congress that we need to tackle, and I am so eager to prove to all my opponents, supporters and anyone who's against me how much we are going to get done in these next two years. “

Mitsch Bush, a former state legislator from Steamboat Springs, was the Democratic nominee for the second consecutive cycle. She lost to Tipton by eight points in 2018.

Boebert has expressed enthusiastic support for the QAnon conspiracy theory, which is rooted in the unfounded belief that President Donald Trump will soon round up and execute his political opponents for drinking the blood of children.

The FBI identified QAnon as a potential domestic terrorism threat.

Appearing on the internet show of a QAnon believer, Boebert said she was “very familiar” with QAnon and said, “If this is real, then it can be really great for our country.”

Trump quickly embraced Boebert upon her primary win, despite an earlier endorsement of Tipton. In a clear sign of her rising stardom in Republican circles, Boebert was in the select crowd attending Trump’s Republican National Convention acceptance speech on the lawn of the White House.

Boebert’s unapologetically conservative agenda is outlined in ALL CAPS on her campaign website, “PRO-FREEDOM, PRO-GUNS, PRO-CONSTITUTION, PRO-ENERGY, PRO-LIFE, PRO-COLORADO, PRO-AMERICA.  HEADING TO CONGRESS TO DRAIN THE SWAMP, STAND UP FOR OUR RIGHTS, AND TELL ALL THE LEFT-WING LUNATICS WE DON’T WANT MORE GOVERNMENT CONTROL, WE WANT OUR FREEDOM!”

Mitsch Bush contrasted that approach, claiming she’s “led calmly” in her time as a state legislator and Routt County commissioner.

Health care was among Mitsch Bush’s focuses on the campaign trail. She has said she supports a universal, single-payer system that retains private insurers while stopping short of endorsing Sen. Bernie Sanders’ Medicare-For-All plan. Republicans have criticized her stance as flip-flopping.

While the 3rd Congressional District, which stretches from Grand Junction to Pueblo, has elected both Republicans and Democrats in recent decades, it went strongly for Trump in 2016.

For all of the latest election results, head to 9news.com/elections.