December 14 is the date set by law for the Electoral College to meet. The electors meet in all 50 states and the District of Columbia to cast their ballots. 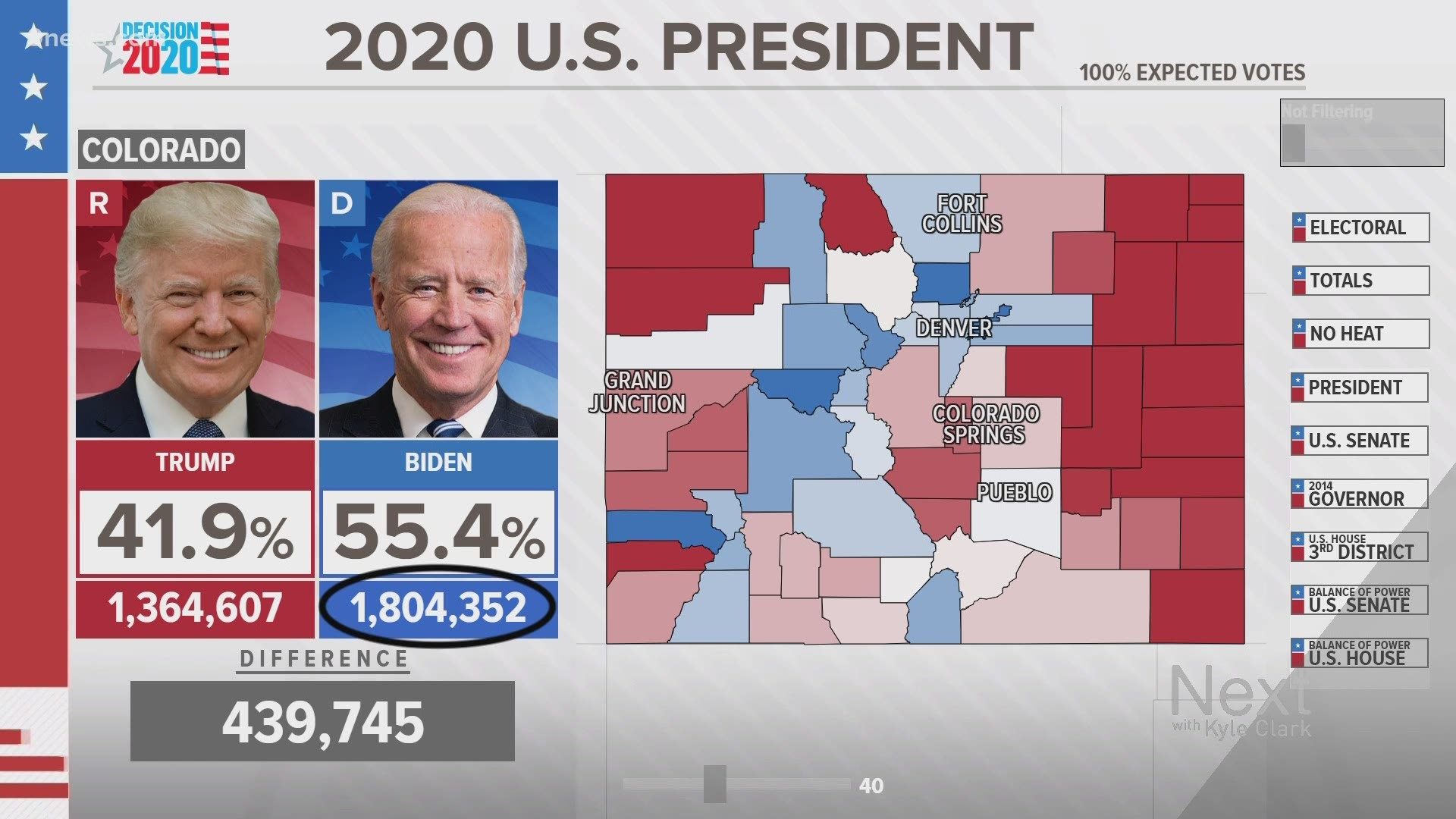 DENVER — Colorado has cast its nine electoral votes for Democrats Joe Biden and Kamala Harris to be president and vice president of the United States during a meeting with the nine presidential electors at the Capitol on Monday.

After acknowledging Colorado's other big event on Monday – the state's first shipment of Pfizer COVID-19 vaccine – Democratic Gov. Jared Polis started the meeting of the electors with a note on Colorado's voting turnout.

"I think we've learned caring for the will of the voters is never anything we can take for granted. This year, in spite of the pandemic, Coloradans cast their ballots in record numbers," said Polis. "I was so proud to see 86% of registered voters of all persuasions make their voice heard, casting over 3.3 million votes."

Presidential electors cast their votes for the presidential and vice-presidential candidates who receive the most votes in the general election. Biden and Harris received 55.4% of Colorado's vote, to 41.9% for President Donald Trump and Vice President Mike Pence.

RELATED: Electoral College meets on Monday, with electors who want it abolished

"We have nine votes for Kamala Harris for Vice President." @juddrchoate announces. #copolitics

When you vote for president, you're not just voting for the president, but nine electors pre-selected by the party to cast the electoral college vote for that candidate.

So why aren't their names also on the ballot, along with the candidates?

The short answer is because state law does not require that.

How about for transparency purposes?

"I don't have a problem with it. I don't think that that would be an issue," said Kennedy, one of the electors.

"I think some people might have this go around because, certainly, we've seen a lot more pushback than we've seen in recent years," said Lynch. "I, personally, would not have a problem with it at all."

Kennedy and Lynch cast two of the votes for Biden on Monday, but neither support the Electoral College as it currently exists. Both would prefer a National Popular Vote, where the president is selected based on the candidate who receives the most votes nationwide.

Both were also Colorado delegates for former Democratic candidate Bernie Sanders. That means they cast votes for Sanders at the Democratic National Convention. Despite that, they still voted for Biden as electors.

"That adds another piece, that we have no problem filling in that box today," said Lynch.

That was not the case in 2016. In an attempt to try to prevent Trump from becoming president, elector Micheal Baca cast his electoral college vote for John Kasich instead of Colorado's winner, Hillary Clinton. The thought process was that if enough electors in different states cast their vote for someone other than Trump, he would not receive enough Electoral College votes to become president.

Baca was removed as an elector since Colorado law requires the electors to cast their vote for the candidate that received the most votes at the general election, which was Clinton.

Baca sued, which ended up in front of the United States Supreme Court earlier this year. This summer, the Supreme Court ruled that electors could not be faithless, and that they are bound by state law.

"It's ironic casting a ballot for Joe Biden and Kamala Harris as a presidential elector, an institution that I, personally, think is undemocratic and rooted in racism and should not exist," said Kennedy.

How are electors selected?

The Colorado Democratic Party picked their electors during the assembly and convention process back in April.

Colorado Republican Party chairman Ken Buck selected the nine that would have cast votes if Trump had won Colorado.

Back to the transparency of the nine electors. How many of you knew who they were before today? Should you know earlier? Like on the ballot?

"I think there's different ways to get at what you're describing. Either the electors name or even a disclaimer really, on the ballot, to remind voters that electors will cast the ballot," said Democratic Colorado Secretary of State Jena Griswold.

"This is a public service, and I want to be out there and accessible to the public," said Kennedy.

"I don't even know who the Republican ones were. It would be interesting to know who they were," said Lynch.

Who were the Republican electors?

The names of the 2020 electors were not available on the Secretary of State's website, but a spokeswoman for the office said that they were accessible through an open records request.

Griswold said she would consider putting them back on the website for the next presidential election.

Putting them on the ballot would require state lawmakers to pass a bill that would be signed by the governor. There were 21 candidates for president on Colorado's election ballot in 2020. Since it's pretty easy to get on the presidential election ballot in Colorado -- $1,000 and signatures from nine people who agree to be your electors should you win -- adding electors names to the ballot would either require small print or additional pages, which would cost counties more money.

Why did the nine Democratic electors get to vote today? Why not the nine Republican electors?

It turns out that there is nothing in state law that specifies which electors cast the votes, just that they are cast for the candidate that received the most votes in the general election.

After the votes were cast, they were certified by Griswold. Then, six certificates of votes cast were paired with six certificates of ascertainment and were placed in sealed envelopes to be mailed to Pence, president of the U.S. Senate; to the archivist of the U.S.; to Honorable Philip A. Brimmer, Chief Justice of the District of Colorado and to the Colorado Secretary of State Office.

Monday is the date set by law for the Electoral College to meet. The electors meet in all 50 states and the District of Columbia to cast their ballots.

The results will be sent to Washington, D.C., and tallied on Jan. 6 by a joint session of Congress.