Here's how Denver voted in 2021 elections

Most of the local bond measures on the ballot passed, while measures on development and sales taxes were rejected. 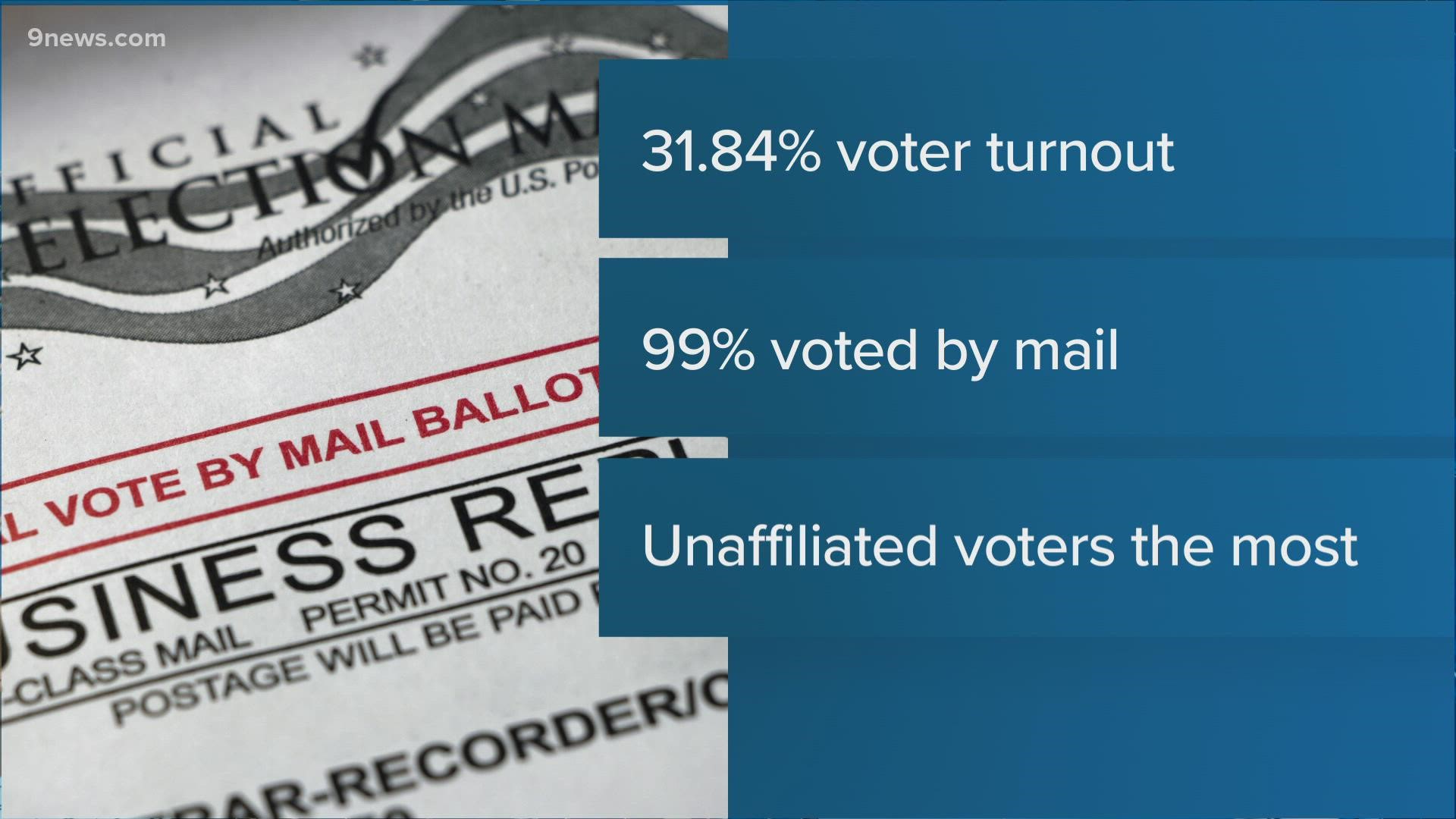 DENVER — Denver voters on Tuesday seemed mostly in favor of bonds for improvements and repairs to city infrastructure, parks and housing, while defeating measures on marijuana sales tax and development.

Voter turnout was low, as tends to happen in an election with no major national or statewide races. According to Denver Elections, as of 5 p.m. Wednesday, 93,848 ballots have been counted, with more to still to be counted.

Even in an off-year election, Denver's ballot had five bond measures, five ordinances and more, including a marijuana sales tax, development at the National Western Complex and former Park Hill Golf Course, and a doubling-down on the city's camping ban.

“Now more than ever, local elections matter, and it has never been more important to exercise your right to vote," Mayor Michael Hancock said in a news release. "These elections have the most direct impact on our lives, so sitting on the sidelines of democracy can’t be an option."

Here's how Denver residents voted. Keep in mind that election officials must certify election results before they're official.

Voters seemed to approve of $260 million in borrowing to repair and improve city facilities, housing and sheltering, transportation, and parks and recreation.

Each of those measures, called Referred Questions 2A-2D, appeared to pass with more than 60% of the vote.

"From improving mobility, resolving homelessness, and strengthening our cultural institutions, libraries and parks-and-rec facilities, these projects will help us build back better and create an economy that works for everyone," Hancock said.

The one bond measure that didn't appear to pass was Question 2E, which would have put about $190 million toward Phase 3 of development at the National Western Complex, including a new arena.

Here are links with more on each of these measures:

Referred Question 2F asked voters whether to get rid of amendments passed this year by the Denver City Council that increased the number of unrelated adults who could live together. That question appeared to be rejected by a vote of about 68% to 32%.

“I’m pleased that voters saw through the misinformation and opted to maintain the housing tools that are necessary to keep Denver diverse and moving forward," Hancock said. "We need every option available to us to tackle our affordable housing challenges."

Referred Question 2G asked whether the city's citizen oversight board, rather than the mayor, should have the power to appoint the independent monitor, which performs a watchdog function over the Denver Police and Sheriff's departments. Voters appeared to pass 2G by a vote of about 68% to 32%.

Referred Question 2H asked if Denver could move its municipal elections for races like City Council and mayor from May to April. This one also seemed to pass about 75% to 25%.

Of the five initiated ordinances on the Denver ballot, four of them appeared to be rejected.

Ordinance 300, funded by a Delaware-based group, would have raised the sales tax on recreational marijuana to pay for local research on pandemics. About 60% of voters said no on this one.

This was one of two ballot measures that would have increased the pot sales tax. The other was statewide Proposition 119, which didn't also pass. Among Denver voters, a narrow majority voted against it, about 51% to 49%.

Ordinances 301 and 302 both concerned the future of the former Park Hill Golf Course. The measure to protect the 155-acre parcel as greenspace appeared to pass, while the measure to leave the door open to development appeared to fail.

Ordinance 303, which would have added measures to the city's unauthorized camping ban, appeared to fail. It had the closest vote of any of the ordinances on the ballot, with about 55% voting no and 45% voting yes.

A Denver judge ruled on Sunday that part of the initiative, which would have required the city to enforce the camping ban within 72 hours of a citizen complaint, was unlawful. Because of this ruling, if the initiative had passed, that 72-hour window wouldn't have been enacted.

“Even with the most onerous part of this measure struck down as unconstitutional by the District Court earlier this week, this measure, pass or fail, was not a solution to homelessness nor encampments," Hancock said. "I share our residents’ frustrations with unauthorized camping, and you have my word that we will continue to work tirelessly to transition our unsheltered neighbors from the streets to more stable settings.”

Ordinance 304 would have lowered the city's sales and use tax and capped it at 4.5%. It appeared that about 62% of voters said no to the initiative.

Hancock thanked voters for rejecting it.

"If passed, 304 would have been devastating to our city’s recovery efforts," he said. "It would have damaged the critical city services Denver residents rely on in their daily lives and the progressive programs voters have supported over the last several years to tackle some of our biggest challenges, from homelessness to climate to preschool to mental and behavioral health care."

Find all of our election coverage and results at 9news.com/elections.