Test of Colorado mail finds delivery is timely, most of the time

An unscientific test of mail delivery times by the Colorado Media Collaborative found little to be concerned about. 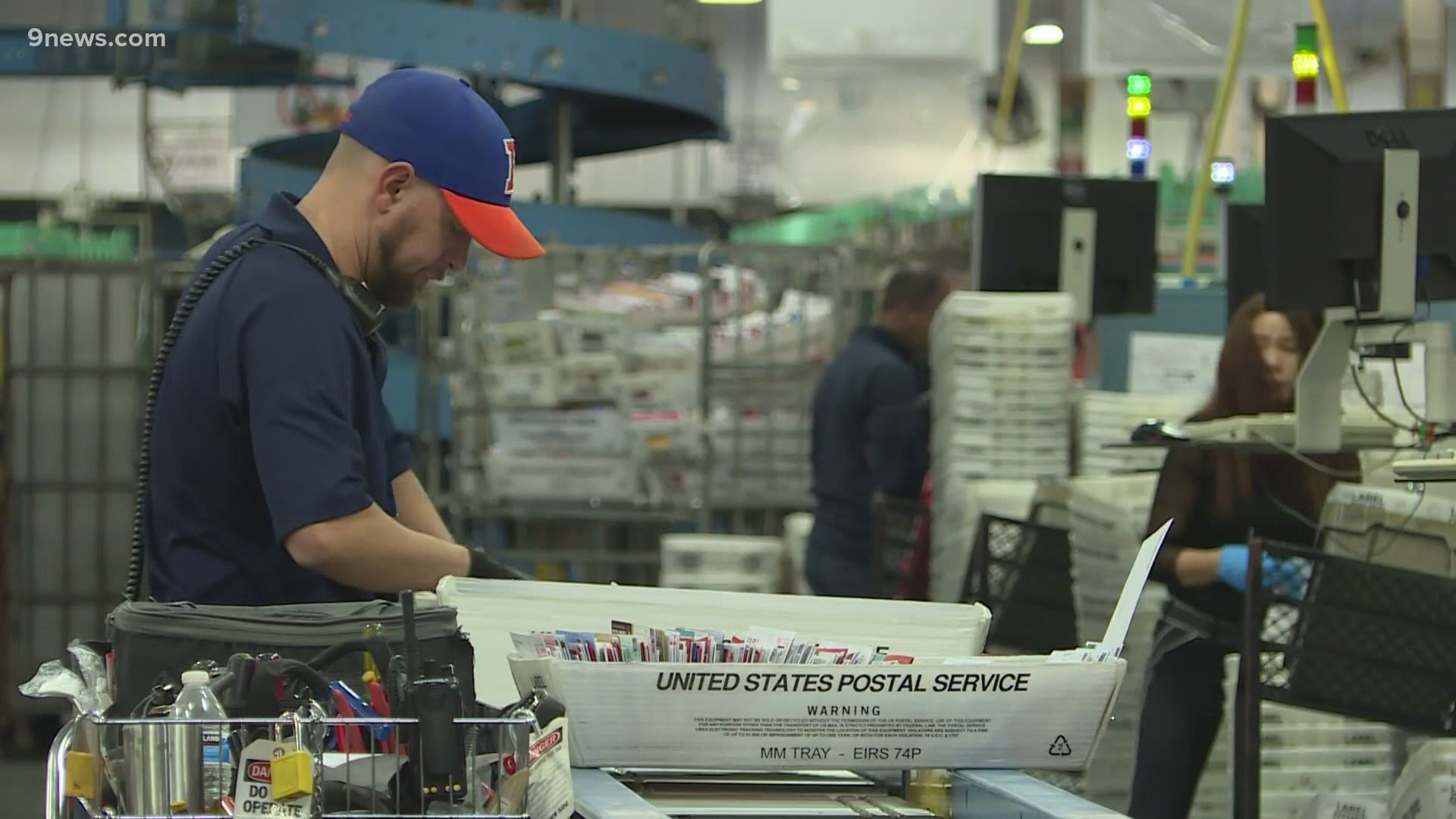 COLORADO, USA — Reports of slower mail delivery times nationally and across Colorado since mid-summer are causing concern as more voters than ever plan to vote by mail in the Nov. 3 election, to avoid coronavirus exposure.

But an unscientific experiment by the Colorado Media Collaborative over the past month found little to be concerned about in the Centennial State.

> Video above: Colorado journalists team up to test speed of mail delivery.

The Postal Service “is committed to delivering Election Mail in a timely manner,” a spokesman for the agency emailed. An Associated Press examination of delivery data obtained through a Freedom of Information Act request, however, indicated that no region of the country meets the target of more than 95% of first-class mail arriving within five days.

The USPS did better in the experiment conducted by Colorado newsrooms.

On the last day of August, 96 pieces of mail were sent out to 26 cities around the state, including to Yuma, Wiggins and Holyoke on the Eastern Plains; to Grand Junction, Eagle, Montrose and Steamboat Springs in the west; and to Salida, Pagosa Springs and Coaldale in the south of the state.

More than half the mailings originated in Denver, Lafayette and Lakewood. Another set of 24 mailings were sent back to Denver from cities and towns around the state between Sept. 2 and Sept. 8.

A padded envelope mailed from Meeker to Salida didn’t arrive, and a letter mailed to Salida was returned to the sender in Centennial as undeliverable, even though the address was correct and four other mailings to the same address arrived within three to four days.

A summer of discontent

Over the summer, the Colorado Attorney General’s Office decided to ask Coloradans on social media how they had been affected by U.S. Postal Service slowdowns, with the expectation it would receive maybe a few dozen stories. Instead, there were nearly 200.

A woman in Littleton named Haley did not receive her bipolar disorder medication, causing anxiety attacks. Zoe, an independent contractor in Denver, received payments from her clients two weeks late, leading to overdraft fees and a damaged credit score. A Telluride resident named Amanda who suffers from Lyme disease went three days without her treatment.

“The response we got was pretty substantial because we literally just made a few social media posts and then ended up getting all of these people telling their stories,” said Attorney General Phil Weiser. “But I think we only got a fraction of the complaints that are out there.”

Weiser’s office cobbled four of the stories into a multistate lawsuit filed in eastern Washington. Its goal was to force USPS to roll back reforms – the removal of sorting equipment, limitations on overtime – that slowed the distribution of mail in July and August. USPS had already pledged to delay its reforms until after the election, but Weiser wanted a binding court order.

He got one. On Sept. 17, a judge issued a preliminary injunction forcing the USPS to end “implementation or enforcement of policy changes … that have slowed mail delivery” and to continue prioritizing all election mail, such as ballots, between now and November.

In the month between Aug. 18, when DeJoy announced he would suspend his reforms, and Sept. 17, when a judge required him to, mail delivery times roller-coastered, according to a massive study by a company called SnailWorks published in The New York Times.

After improvements in late August, delivery times slowed in the first half of September. A spokesman for SnailWorks said in an email that Colorado was in line with the rest of the nation.

With ballots set to be mailed in two weeks, that’s worrisome for some election watchers.

How mail-in ballots work in Colorado

Colorado began all-mail elections in 2013, though several counties conducted elections by mail before then. Only 7% of voters cast ballots in person in 2016, and 4% did so in 2018.

While the ballots go out to voters via the Postal Service, only one-quarter of voters who vote by mail put a stamp on the envelope to return it. The other 75% return their ballots via dropboxes around the state.

And there have occasionally been problems.

Two years ago, a truck with 61,000 Adams County ballots went missing after it was turned away by the Postal Service for not having the proper paperwork. The ballots were delivered after the foul-up was discovered.

About 100 voters in Coaldale in western Fremont County did not receive ballots in the June 30 primary election. Mark Gully, who owns Outback Fibers in Coaldale, said he didn’t receive his ballot until after the primary was over.

He wasn’t a fan of all-mail elections in the first place.

“I would rather have everybody go and place their vote in a box in a balloting place,” Gully said. “To me this is an example of what can happen in mail ballots.”

Fremont County Clerk Justin Grantham said the Coaldale confusion was the result of ballots not being routed properly from Denver, and people using post office boxes to receive their ballots. If a person’s name isn’t specifically listed on the PO box, the ballot is returned to the clerk’s office.

Meanwhile, at the attorney general’s office, employees have stopped counting and collecting stories about USPS slowdowns and the problems those slowdowns have caused.

Weiser, a Democrat, says he has been assuaged and comforted by the Sept. 17 injunction, although he will be keeping an eye on DeJoy and USPS in the weeks and months ahead.

“We’re going to remain vigilant,” he said, “and stay on top of this.”

This story is brought to you by COLab, the Colorado News Collaborative, a nonprofit coalition of more than 50 newsrooms across Colorado working together to better serve the public. Learn more at colabnews.co.

RELATED: Does Colorado have enough face masks, gowns and other PPE to handle another coronavirus spike?