Georgia was put in the spotlight for weeks following the November general election after Trump wrongly claimed there was widespread fraud. 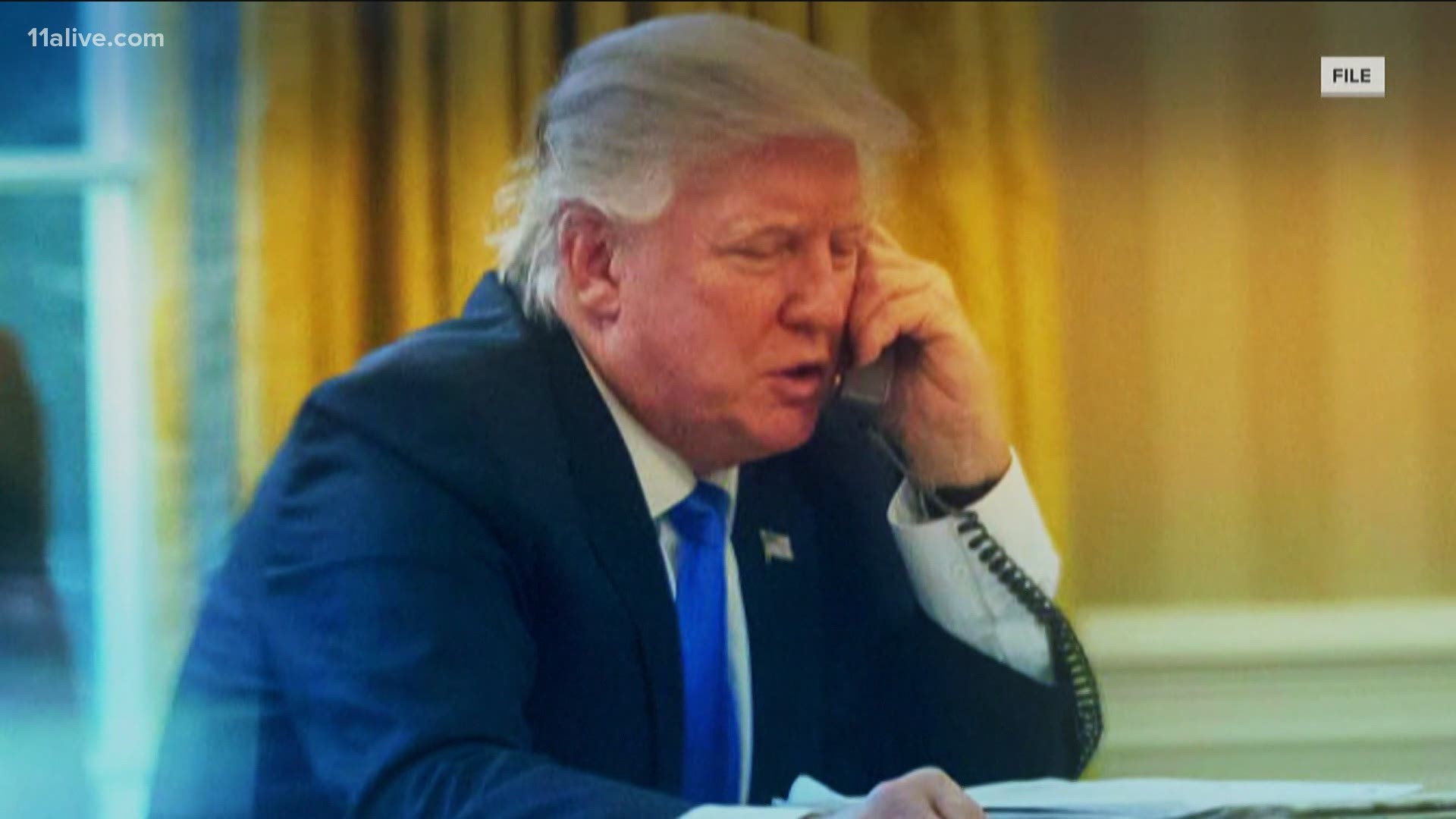 ATLANTA — Former President Donald Trump's efforts to overturn the Georgia's 2020 election results has led to an investigation being opened by the Secretary of State's Office, according to a report from Reuters.

11Alive reached out to Secretary of State Brad Raffensperger’s office Monday to confirm details about the investigation.

The only information spokesperson Walter Jones provided was that "the Secretary of State’s office investigates complaints it receives. The investigations are fact-finding and administrative in nature. Any further legal efforts will be left to the Attorney General.”

Georgia was put in the spotlight for weeks following the November general election after Trump claimed there was widespread fraud. However, election officials within the state, and even then-U.S. Attorney General William Barr, said the Justice Department had not uncovered evidence of widespread voter fraud that would change the outcome of the 2020 presidential election.

RELATED: Former federal prosecutor weighs in on impact of a possible Trump trial in Fulton County

Trump also targeted Georgia governor Brian Kemp in his attacks against the state's election, calling for the governor's resignation in a tweet and describing him an "obstructionist who refuses to admit that we won Georgia."

Raffensperger and Kemp - both Republicans - didn't let the noise distract them from what officials said was a legit election.

Earlier this year, the secretary of state came forward to speak with 11Alive about a leaked phone call in which Trump tried to pressure him to "recalculate" the Georgia vote count because Trump wanted "to find 11,780 votes."

The January recording was first released by The Washington Post.

And in a previous December call, Trump reportedly tried to pressure a Georgia election investigator to "find the fraud," saying the official would be a "national hero."

It's important to note the state counted the votes for the presidential election three times - the initial tally, again during a hand audit, and a final time after Trump's campaign officially filed a request for a recount. Each time, Joe Biden was the winner.

11Alive asked our legal analyst Page Pate what could be next for the investigation. Pate said that would depend on what the Secretary of State's Office - which only conducts the fact-finding mission and doesn't bring charges -  finds.

"Once they make a conclusion, then they can defer the case to the attorney general's office for prosecution," Pate said.

But Pate said it's not only the attorney general who could bring charges, the Fulton County District Attorney's office is also investigating the phone calls. However, he said it will be a case of either / or - as someone in Georgia can't face criminal prosecution for the same conduct.

"I think we'll hear from the Fulton County DA first, because the Secretary of State investigating does take some time, and then it has to be referred to (Attorney General) Chris Carr," Pate predicted. "We know the DA in Fulton has already been looking into this. I think they could be in a position to make a decision much sooner than the state level."

Pate said someone accused of violating election laws could be punished for a misdemeanor or a felony.

"There are different laws that could create a criminal violation for someone interfering with an election - most obvious one here would be criminal solicitation to commit election fraud," Pate explained. "If somebody calls the Secretary of State's office and tried to convince someone there to do something improper - to create votes or lose votes, tinker with machines - that could be a criminal offense in Georgia."

RELATED: Former federal prosecutor weighs in on impact of a possible Trump trial in Fulton County

However, in this case, Pate said, it could be murky - because it would be hard to prove.

"It's a close call in my opinion," Pate admitted.

"When Trump was talking to the Secretary of State, he had the intention, I think, of getting the vote changed in Georgia," he said. "What may be missing from a criminal prosecution is that Trump didn't tell him exactly what to do. In other words, the criminal prosecutor would have to show some specific act that was fraud. ... There was no instruction to do that."

"I can see an aggressive prosecutor taking the case, but it won't be easy," Pate said.

Once the investigation is complete, Pate said he would expect the most likely punishment - should Trump be convicted - would be a misdemeanor.

"I don't think the president is going to jail in Georgia, but he could be find and placed on probation."