11Alive obtained a recording from a government source of Trump pressuring Raffensperger to "recalculate" the vote count because "I just want to find 11,780 votes." 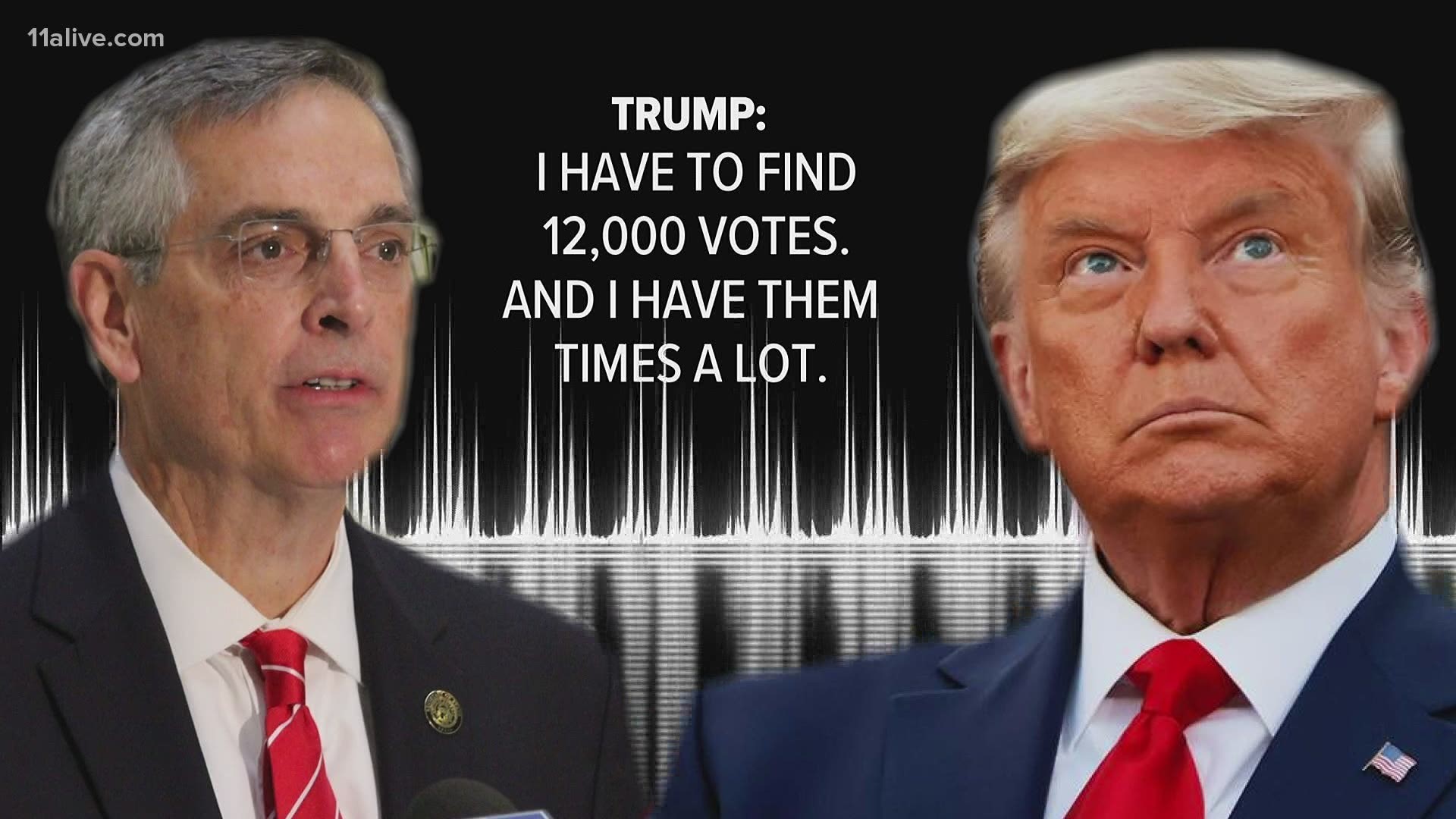 FULTON COUNTY, Ga. — With two days until the U.S. Senate runoffs in Georgia, President Donald Trump took to Twitter again on Sunday morning to blast state officials and its elections.

Trump said he spoke to Secretary of State Brad Raffensperger, who has been a target of many critics, on Saturday and said "he has no clue."

"He was unwilling, or unable, to answer questions such as the “ballots under table” scam, ballot destruction, out of state “voters”, dead voters, and more," Trump tweeted.

11Alive News obtained a recording from a government source of the President pressuring Raffensperger to "recalculate" the Georgia vote count because "I just want to find 11,780 votes," Trump said.

The recording was first released by The Washington Post.

“Well, Mr. President, the challenge that you have is, the data you have is wrong,” Raffensperger responded.

He warned Georgians on Twitter to "be careful of the political corruption" in Fulton County, which he said "is rampant.

In the one-hour phone call with election officials, Trump insisted he won the state and threatened legal consequences against Raffensperger and his staff.

Trump questioned the possibility that ballots in Fulton County were shredded and that Dominion "is moving fast to get rid of their machinery."

Ryan Germany, who oversees the legal functions for the Secretary of State's office, told the President that this was not true.

I spoke to Secretary of State Brad Raffensperger yesterday about Fulton County and voter fraud in Georgia. He was unwilling, or unable, to answer questions such as the “ballots under table” scam, ballot destruction, out of state “voters”, dead voters, and more. He has no clue!

Trump continued to berate Raffensperger, as heard on the recordings.

"So, tell me, Brad. What are we going to do? We won the election and it's not fair to take it away from us like this. And it's going to be very costly in many ways."

The President also threw Gov. Brian Kemp under the bus - again - along with Lt. Gov. Geoff Duncan, saying they are a "disgrace to the great people of Georgia" on Twitter.

"The Governor, @BrianKempGA, and his puppet Lt. Governor, @GeoffDuncanGA, have done less than nothing," the Tweet read.

Republicans in Georgia must be careful of the political corruption in Fulton County, which is rampant. The Governor, @BrianKempGA, and his puppet Lt. Governor, @GeoffDuncanGA, have done less than nothing. They are a disgrace to the great people of Georgia!

As with many of the President's Tweets claiming fraud in the November election in which he lost to Joe Biden, the social media platform flagged the tweets saying the "claim about election fraud is disputed."

Trump previously said he was ashamed that he ever endorsed Kemp for governor. In a tweet on Wednesday, Trump called on Gov. Kemp to resign from office.

The governor during a press conference said "I've supported the president," and "worked as hard as anybody in the state on his re-election up through Nov. 3" as well as the legal process that followed.

"I've done the things that I can do under the power I have by our laws and constitution of our state," Kemp said.

He framed the ongoing matter with Trump a "distraction."

Kemp said he has no plans to attend a rally Monday in Dalton for Republican senators Kelly Loeffler and David Perdue. The rally's headlining speaker is President Trump.

Raffensperger, who is a Republican, previously came out saying he voted for Trump, however, has continued to debunk the president's claims of voting fraud in Georgia.

"Donald Trump is trying to change the outcome of the presidential election by strong-arming and bullying our elections officials into subverting out democracy. This is an outrage," Congresswoman-elect Carolyn Bourdeaux (D-Suwanee) said.

Several investigations, including one by 11Alive, confirmed that two of the four Georgia voters the president accused of fraudulently voting “dead” are alive.

Trump has repeated a litany of baseless assertions of political corruption, machine tampering and mysterious votes appearing out of nowhere that allowed Biden to steal the election. Others in his administration have said the election was secure. Then Attorney General William Barr said the Justice Department had seen no evidence of widespread fraud to overturn Biden’s margin of victory. 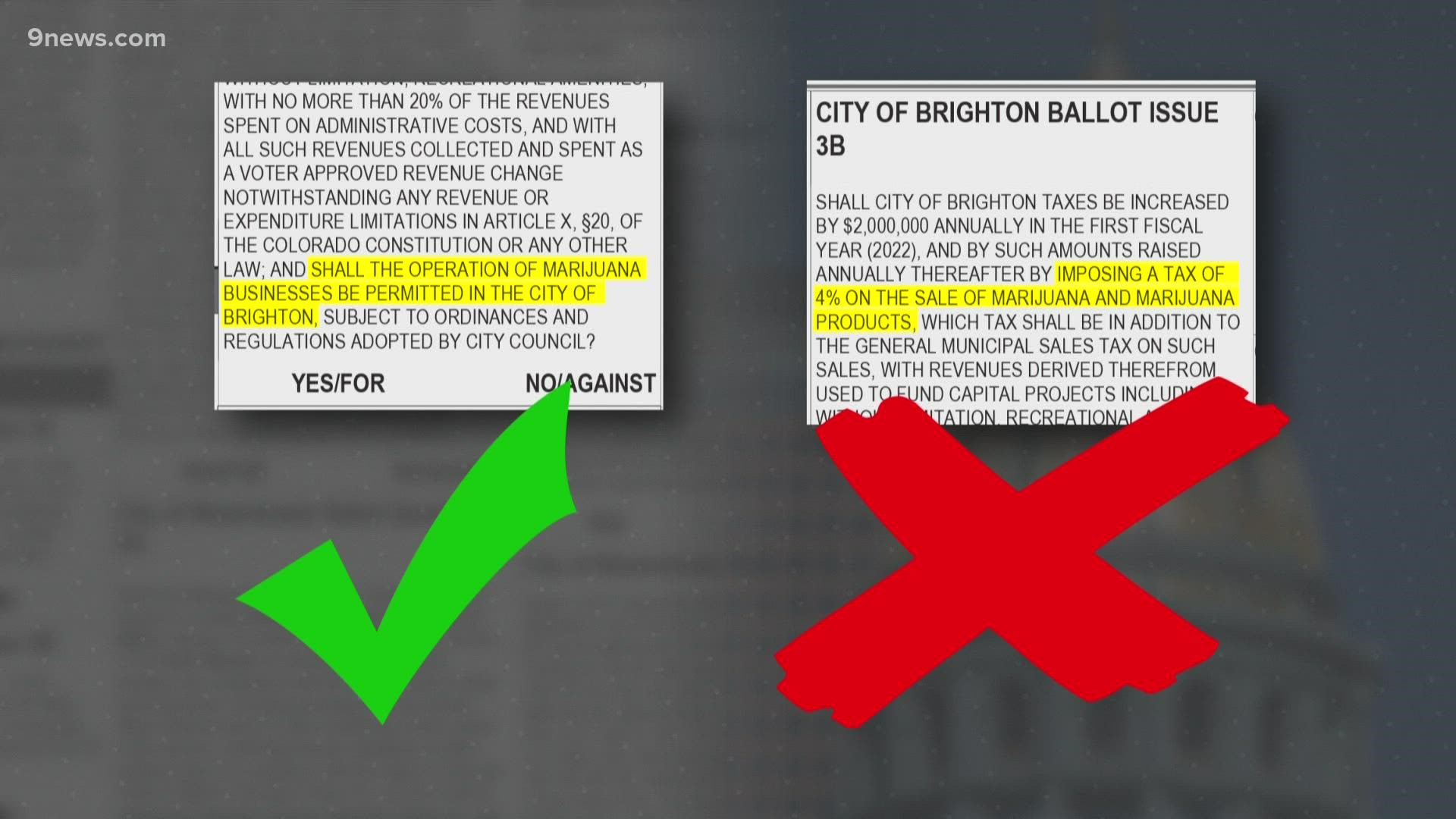 Why did this ballot question bury the lede? Because of Colorado law