The postcard says that voters should request a mail-in ballot. In Colorado, all registered voters are automatically sent a ballot. 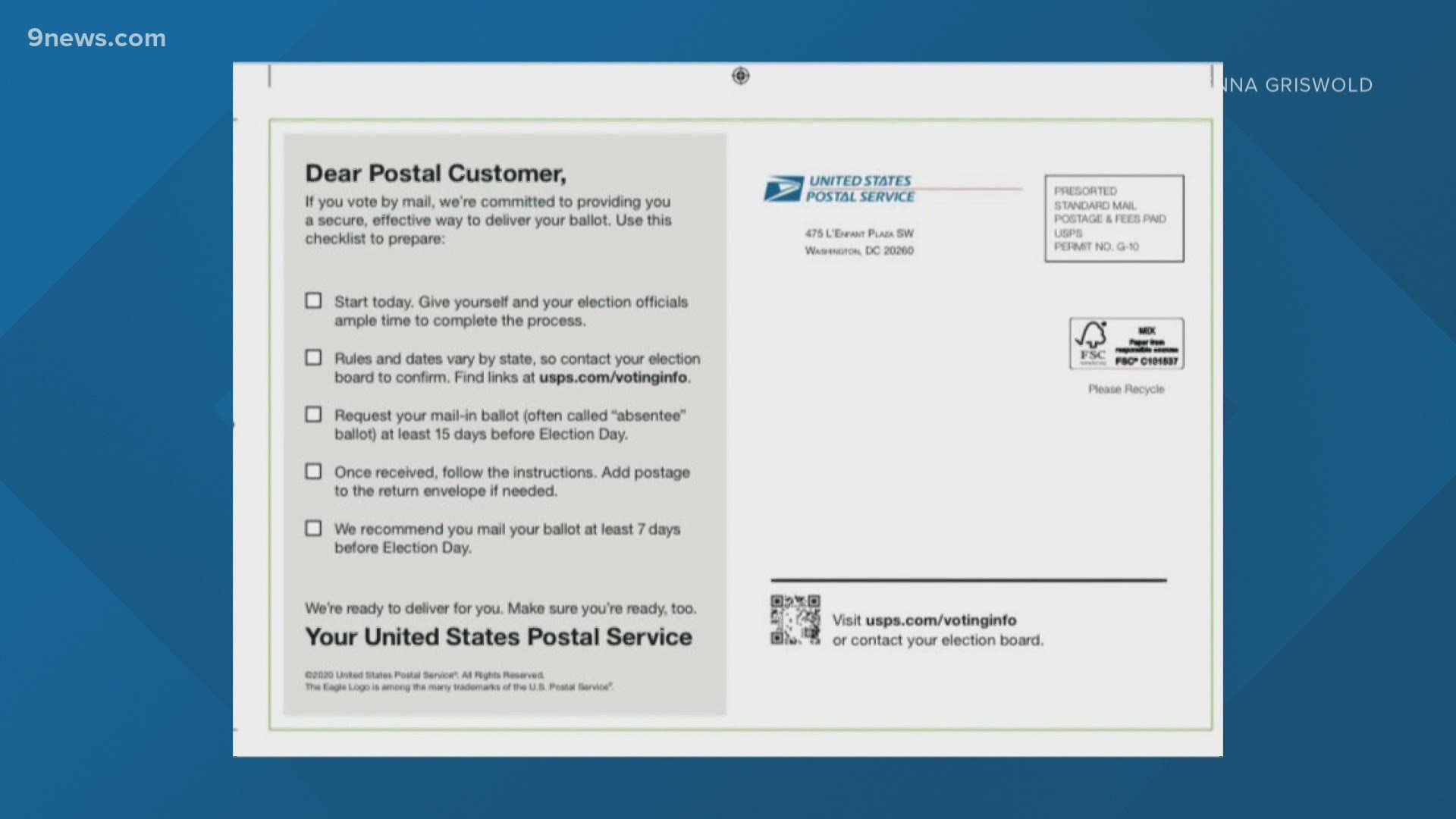 COLORADO, USA — Colorado's Secretary of State is threatening legal action against the U.S. Postal Service (USPS) over a postcard she said will confuse Coloradans about mail-in voting.

Jena Griswold (D) tweeted a picture of the postcard she claimed the USPS is sending to every household and PO box in the country.

The postcard she shared includes a "checklist to prepare" for the upcoming election. The list includes:

In Colorado, and some other states, every registered voter automatically gets a ballot in the mail. Voters do not have to request them.

"For states like Colorado where we send ballots to all voters, the information is not just confusing, it’s WRONG," Griswold said in the tweet.

I just found out the @USPS is sending this postcard to every household and PO Box in the nation. For states like Colorado where we send ballots to all voters, the information is not just confusing, it’s WRONG. (Thread) pic.twitter.com/RoTTeJRJVl

Griswold also said secretaries of state asked Postmaster General Louis DeJoy for the chance to review the postcard for accuracy, but he refused.

She said she's worried confusing voters may undermine confidence in the election and suppress votes.

"This may have started off as a well-intentioned effort by @USPS, but their refusal to listen to election experts combined with the recent postal slowdown in some parts of the country is beyond suspect," another tweet reads.

Griswold said she "will do everything in her power" to keep the postcards from being sent to voters and that she is "exploring legal action."

Confusing voters about mail ballots in the middle of a pandemic is unacceptable. It can undermine confidence in the election & suppress votes. I will do everything in my power to stop @USPS from sending misinformation to voters.

"In August, the Postal Service began to roll out an omni-channel public information campaign that will continue through Election Day to educate the public on the Postal Service’s role in the mail-in ballot process.

The non-partisan campaign neither encourages nor discourages mail-in voting; rather, it is designed to reach and inform all voters about the importance of planning ahead if they plan to vote by mail.

This includes a postcard which encourages voters who choose to use the mail to visit our educational website."