There was no debate, but there was also no stopping candidates from talking about each other. 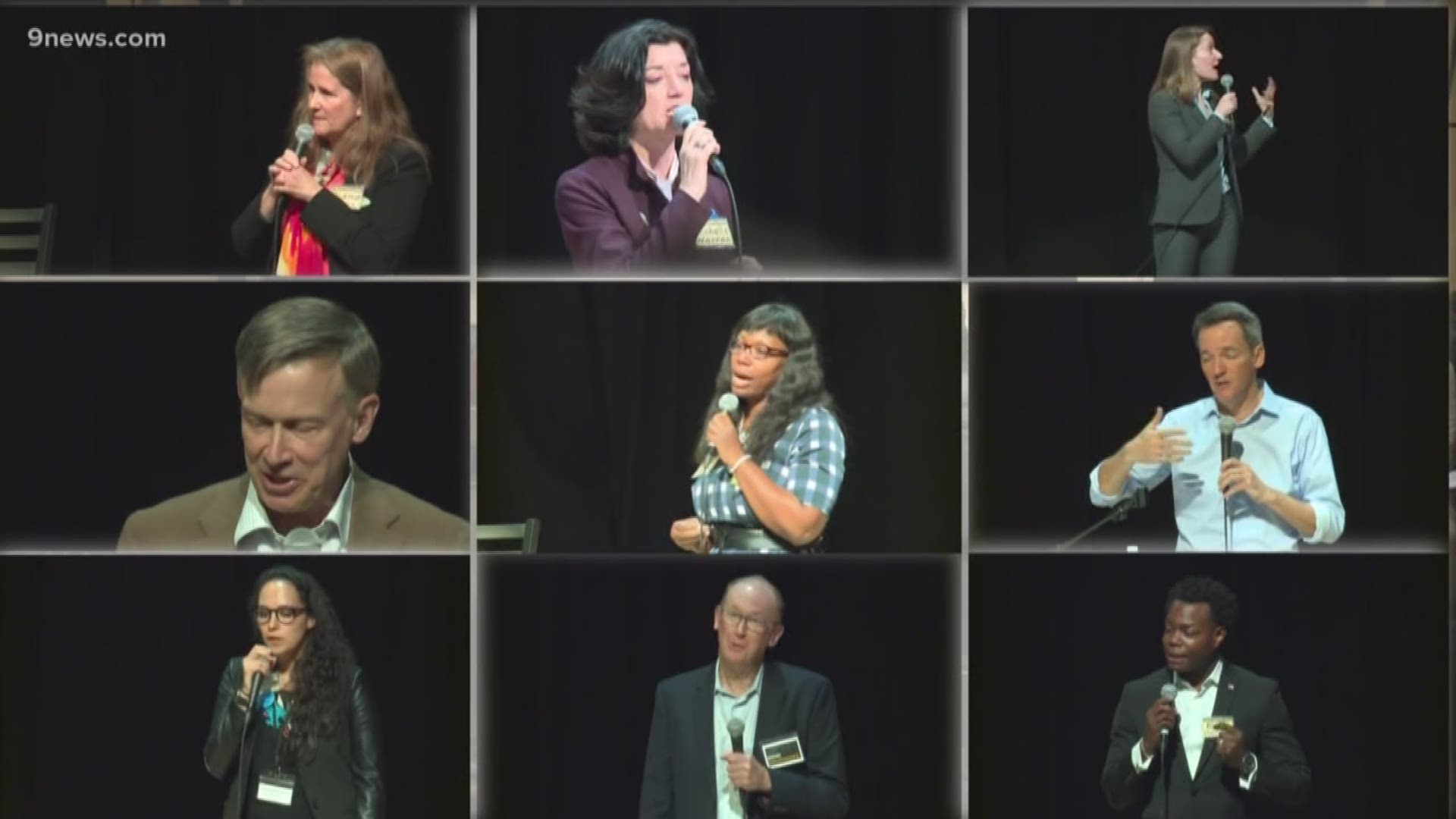 LONGMONT, Colo. — All the active Democratic candidates running for U.S. Senate were on the same stage in Longmont on Sunday.

Not at the same time.

There was no debate, but there was also no stopping candidates from talking about each other.

The participants were (in order of forum appearance):

The forum, moderated by Nick Lopez, focused on Latino issues, with every candidate being asked about oil and gas operations impacting the health of Latino communities that live near them.

"Over the last 10 years, fracking and energy development has been huge, particularly in Boulder County and the rest of Colorado, so the answers that they give to those issues are important, and we should recognize that the result of energy development policies, like fracking and other similar energy policies, do have a disproportionate impact on communities of color, particular Latinx communities," said Lopez. "I was very impressed with how each candidate addressed the audience and talked about policies that were important to this community. We want to hear more of that. We need to hear more of that."

Before the forum, former Gov. John Hickenlooper spoke with 9NEWS about being in Longmont and trying to prove to voters that he's on their side when it comes to oil and gas.

"In Colorado, our constitution says that the state, nor any local government can block the access to someone's minerals, it's private property. Our Attorney General took that twice, sued local municipalities, and the Supreme Court voted 7-nothing each time that's against our Constitution," said Hickenlooper. "Let's not fight over that. Let's accelerate our ability to make oil and gas obsolete to get to a truly greener economy."

During the debate, he was asked about energy pollution and the health impacts on those who live nearby.

"There is no question that industrial activity ends up subjecting lower-income communities and disproportionately, people of color, to unfair health consequences," said Hickenlooper. "If we can't push the activities further back, what can we do? And the biggest thing the lawyers say is you can demonstrate health effects, and the way you do that, you go out and do these massive studies which is exactly what we're beginning to see now."

He talked about advanced technology that can help prove the health impacts that would then cause change in the industry.

"Within the next few years, we're all going to be able to have, on some cellphone, the ability to test water quality and to test air quality, and then it's a job of all community and all government to make sure that we hold every business of any kind accountable for any health effects that they are creating," said Hickenlooper. "As soon as you can measure, on a regular and frequent basis, that's when you begin to transform their activity."

"Your community tried to restrict Fracking because you recognized the danger it posed to public health, and instead, you found a Governor now in this race, who sued you when you were just trying to do the right thing," said Romanoff.

During his turn in the forum, Romanoff made it clear his challenger is Hickenlooper and not Gardner.

"I know there are a lot of folks in Washington right now who do not want you to be here, and they certainly don't want me or most of the other candidates to be on this stage. They announced as much," said Romanoff. "They recruited into this race a fellow who said he didn't want the job and wouldn't be good at it. And they've done everything they possibly can to stifle this primary, to anoint a winner, to turn what ought to be a contest into a coronation. Please don't let that happen."

His jab at Hickenlooper is about comments he made while running for President that he wasn't cut out to be a Senator.

Outside of the forum, Romanoff said that oil and gas wouldn't be Hickenlooper's strong suit in Longmont.

"We're trying to make the case that we need a Senator who actually understands the urgency of this moment, who will act as though our lives depend upon it, and treat the climate crisis like the emergency that it is, who won't parrot the talking points of the Republican party, and attack progressive proposals by equating them to socialism or Stalinism as John (Hickenlooper) has done, who will sign the no fossil-fuel money pledge, who will stand up to big oil and who will not continue simply to sue communities, like Longmont, that have tried to restrict fracking and protect their public health," said Romanoff.

Both candidates tried to make it clear that even if they must sit in a Republican-controlled Senate or with a two-term President Trump, they will be more successful for Colorado than Gardner.

"I'm not saying I can change (Senate Majority Leader) Mitch McConnell, do not misquote me, but the bottom line is I think someone's got to go back there and try to figure out how to get people together and get things done," said Hickenlooper.

"If, God forbid, (Trump) does (win), we need somebody in the U.S. Senate who will act as a check on his authority. That's what Cory Gardner promised in 2014, before Donald Trump arrived. He said, 'I'm going to be a new kind of Republican, I will be an independent voice for Colorado, when my party is wrong, I'll say it.' That was a great speech. It helped get Cory elected. It has been contradicted by virtually every vote he's cast since then," said Romanoff.
None of the candidates are officially on the ballot yet.

To qualify, candidates can petition on by collecting 1,500 valid voter signatures from each of Colorado's seven Congressional Districts.

Candidates could start collecting signatures on Jan. 21, and they have until March 17.

The other way to qualify is to go to the Democratic State Convention on April 18 and earn, at least, 30% of the support from the delegates at the convention.

Colorado will select its Democratic nominee for U.S. Senate on June 30.