'The only thing that stopped the crowd was my rifle': Man who pulled out gun amid protest speaks out

Videos from the protest showed the man pointing a semi-automatic rifle and a woman pointing a pistol at the crowd marching down the street. 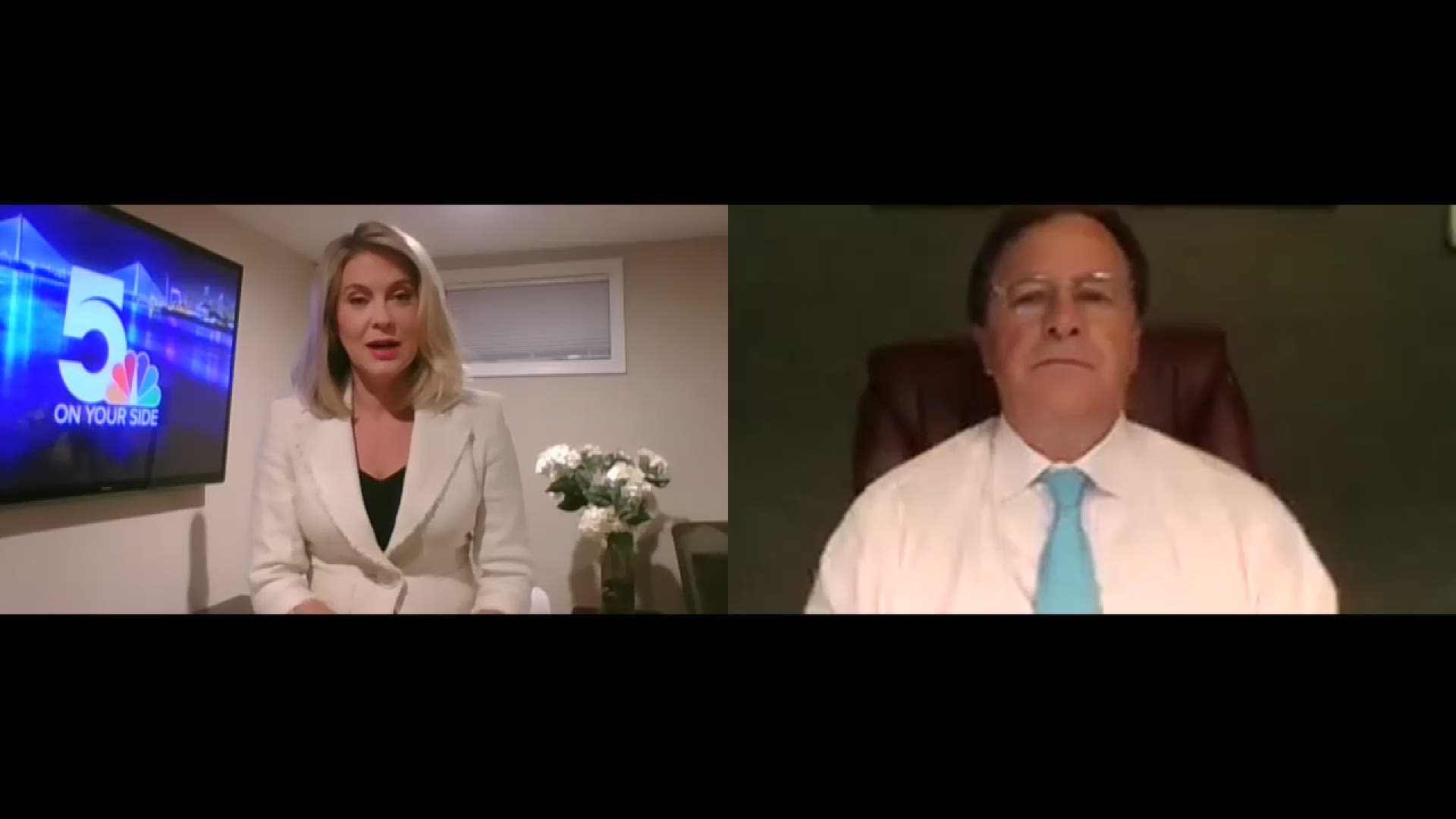 Mark and Patricia McCloskey live in a neighborhood with million-dollar homes. The entire neighborhood is privately owned and managed, which means the entire street is considered private property.

The couple has been seen across social media in what are now viral photos – which show them pointing guns at protesters.

Mark McCloskey spoke to 5 On Your Side on Monday.

Below is the transcript of the interview

Mark McCloskey: We came back to the house. I don't know what time it is, I've been up ever since. I'm a little, I'm a little blurry, but we were preparing dinner. We went out to the east patio, open porch that faces Kingshighway on one side and Portland Place Drive on the south, and we're sitting down for dinner. We heard all this stuff going on down on Maryland Plaza. And then the mob started to move up Kingshighway, but it got parallel with the Kingshighway gate on Portland Place, somebody forced the gate, and I stood up and announced that this is private property. Go back.

I can't remember in detail anymore. I went inside, I got a rifle. And when they, because as soon as I said this is private property, those words enraged the crowd. Horde, absolute horde came through the now smashed down gates coming right at the house. My house, my east patio was 40 feet from Portland Place Drive. And these people were right up in my face, scared to death. And then, I stood out there. The only thing we said is ‘This is private property. Go back. Private property. Leave now.’

At that point, everybody got enraged. There were people wearing body armor. One person pulled out some loaded pistol magazine and clicked them together and said that you were next. We were threatened with our lives, threatened with a house being burned down, my office building being burned down, even our dog's life being threatened. It was, it was about as bad as it can get. I mean, those you know, I really thought it was Storming the Bastille that we would be dead and the house would be burned and there was nothing we could do about it. It was a huge and frightening crowd. And they were they broken the gate were coming at us.

Allred: There have been some reports on Twitter and people who say they were there. It says they are saying the gate was already broken.

Allred: Were the protesters on your private property at any point?

And you've got to appreciate that if there are two or three hundred people, I don't know how many there were. We were told that 500 people showed up at the Lyda Krewson house, which is not on our street, as you know. But how many of them came through Portland Place? I don't know. But it was a big crowd and they were aggressive, wearing body armor and screaming at us and threatening to harm us. And how they were going to be living in our house after they kill us.

Allred: And what has happened since last night, and those images exploded online?

McCloskey: Well, I've had to turn the phones off in my office. I had to come over here last night and have the office boarded up because we're getting threats against the building and everybody. It is interesting to me that the very people that are asking the mayor to resign for 'doxxing' people have now put all of my information all over the web, everywhere in the world. Is there some hypocrisy there? You know, maybe I'm maybe I'm missing something.

But we've had to turn off our telephones here at the office because all my lines have been going continuously since I got here at 10:30 last night. I am getting thousands of emails. I going to have to turn off my website. And it's all it's been both threatening and encouraging because of the number of people who have voiced their support. But there's also been an awful lot of people who have the very direct threats of violence against me and my family.

McCloskey: Oh, God, yes. The death threats started within minutes. I mean, I don't know how long this whole event started. But I'll bet we got our first e-mail death threats before the mob moved on from Portland Place.

Allred: When you see the images online of you and your wife on the patio, armed now after the fact. What do you think?

McCloskey: Well, you know, we were always obviously upset. My wife doesn't know anything about guns, but she knows about being scared. And she grabbed a pistol and I had a rifle, and I was very, very careful I didn't point the rifle at anybody.

The only thing that stopped the crowd from approaching the house was when I had that rifle and I was holding there. The only thing that stemmed the tide. I can't blame my wife for being terrified and for doing what she could to protect what she thought was her life, it was it was, you know, a horrible, horrible event.

And to call these people protesters, I've lived in the City of St. Louis for 32 years. We were, you know, urban pioneers back when we bought on Portland Place in 1988. And we have done everything for 32 years to improve the neighborhood and to keep this historic neighborhood going. And it's very frustrating to see it get targeted. And of course, we'd been told by the press and by Expect US, that they wanted to start targeting middle-class neighborhoods and upper-class neighborhoods and bring their revolution outside of the cities. And we got an email from our trustees on Thursday saying that they were going to do this on Friday. We're very worried about it.

I drove to the office today. There's spray painted on one of the boarded up buildings on Maryland Plaza, slogans saying on the board up that when we come to F stuff up. This isn't going to stop us, is it's a it's a it's a revolution going on.

Allred: Any regrets about what happened?

McCloskey: I regret they broke in the gate. I can tell you that. I mean, what l'll say this. There is there's mayhem in the city every night. You never hear about it. There'll be dozens of shootings, multiple deaths. No one seems to care about those black. lives. But but, you know, it's when it's when there are political, political capital to be made from somebody's death. That death matters no other life matters that I can see, you know.

I do civil rights cases. Right now, I'm representing a young man who was assaulted by the police who is sitting in prison right now for being involved in a car accident after which the police came in and assaulted him. It's on video. I'm not some kind of extreme, you know, anti- Black Lives Matter guy. I do these cases. I have been doing them for decades. I mean, I have on the wall of my conference room, I've got an anti-slavery broadsheet, the abolitionist broadsheet from 1832. It's been there as long as I've owned this building. I mean, I'm not I'm not the enemy of people that really care about the Black lives, but I'm apparently the enemy of the terrorists and the Marxists that are running this organization.

McCloskey: Sure. First of all, why are they protesting on Portland Place. The mayor doesn't live there? And when they kick in the gate, when the first thing they do is destroy private property and they storm in angry and shouting and threatening. This isn't a protest. It's a revolution. It's just an attempt to inflict terror. It's the definition of terrorism is to use force and violence, terrorize a population. And that's what happened to me last night.

Allred: What will your family do now with threats against your life, your home, your business?

McCloskey: Well, I'm hoping that the government goes to protect us. Although I have my doubts about that. We will struggle through the best way we can. It is it is discouraging.

McCloskey: I don't think so. I just I wish that this hadn't happened last night, but I didn't ask for it. I was having dinner.

1 / 6
UPI
A husband and wife hold a pistol and semi-automatic rifle as protesters walk past their house. Photo by Bill Greenblatt/UPI

Below is the full statement from attorney Albert Watkins, who is representing Mark and Patricia McCloskey:

“Both Mr. and Mrs. McCloskey are lawyers whose professional careers have punctuated by their long standing commitment to protecting the civil rights of clients victimized at the hands of law enforcement. This commitment of time and resources to this cause continues today in the Isaiah Forman case.
The peaceful protesters were not the subject of scorn or disdain by the McCloskeys.

"To the contrary, they were expecting and supportive of the message of the protesters. The actions of violence, destruction of property and acts of threatening aggression by a few individuals commingling with the peaceful protesters, gave rise to trepidation and fear of imminent and grave.
Both Mr. and Mrs. McCloskey acted lawfully on their property which sits on a private gated lane in the City of St. Louis. Their actions were borne solely of fear and apprehension, the genesis of which was not race related. In fact, the agitators responsible for the trepidation were white.

“The Black Lives Matters movement is here to stay, it is the right message, and it is about time.

“The McCloskeys want to make sure no one thinks less of BLM, its message and the means it is employing to get its message out because of the actions of a few white individuals who tarnished a peaceful protest.”

RELATED: 'I wasn’t really thinking about the guns' | The photographer who captured viral images of St. Louis protest