“We are all making plans for him to accept the re-nomination here in Charlotte," Vice President Mike Pence told WCNC Charlotte. 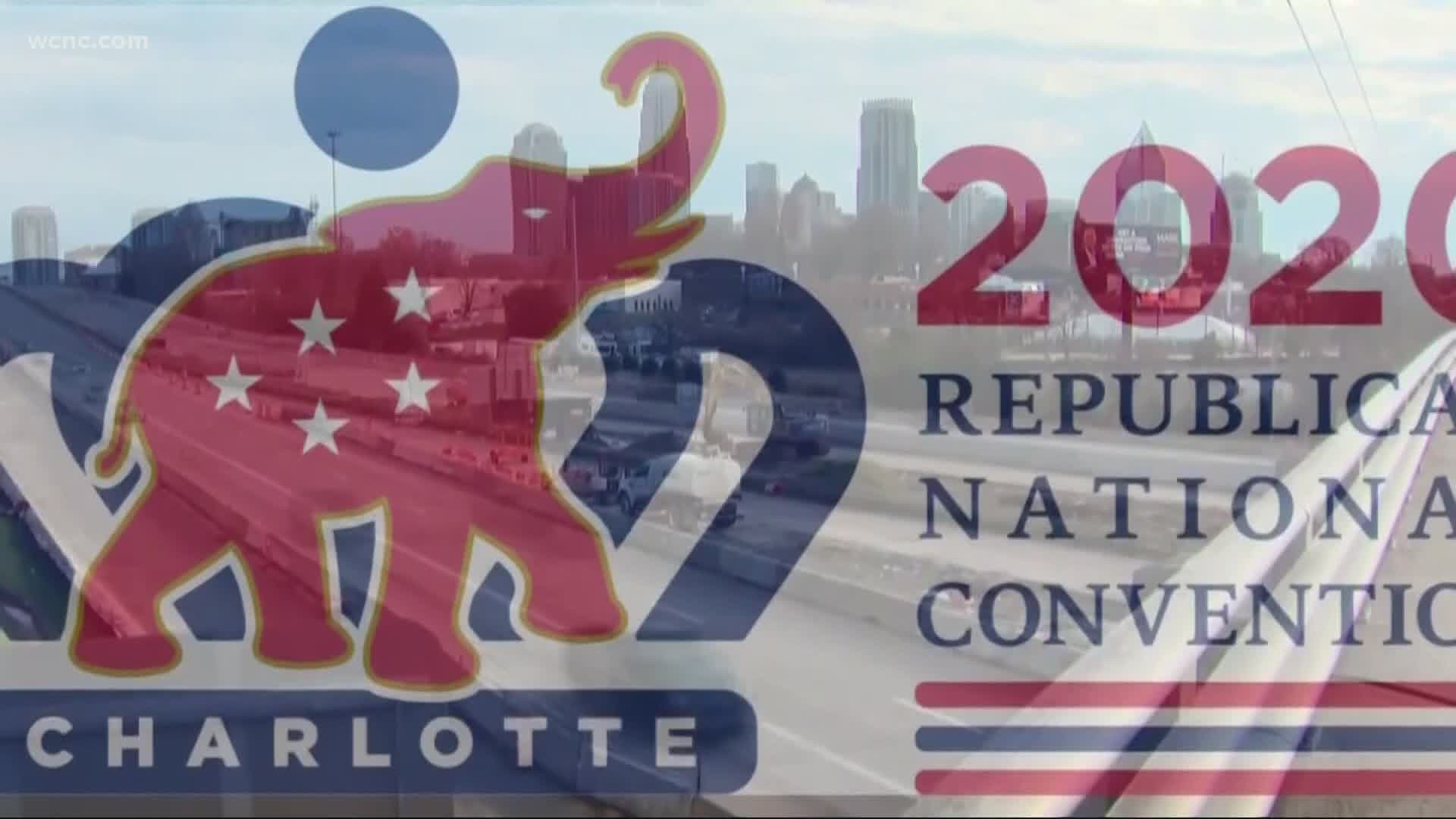 CHARLOTTE, N.C. — Officials are making plans for President Donald Trump to potentially visit the City of Charlotte in-person during the week of the Republican National Convention in August.

"I know the president and I are truly honored it will be in Charlotte, and in North Carolina, that we're renominated by the Republican party," Vice President Mike Pence told WCNC Charlotte Thursday. "We're all making plans for him to accept that renomination here in Charlotte."

The vice president's answer came during a visit Thursday in Raleigh where WCNC Charlotte asked Pence where Trump would be giving his acceptance speech. Officials with the RNC and Trump's communication team later clarified Pence's answer. They said Trump had not committed to a location for his acceptance speech - and Pence was referring to plans for Trump to possibly visit Charlotte during the week.

Delegates will meet in Charlotte where they are expected to formally renominate Trump and Pence for the republican nomination for the presidency.

RNC officials were quick to point out the difference between accepting the nomination and giving an acceptance speech.

Sources familiar with the situation say there are no plans at this time for the president to give an acceptance speech in the Queen City.

"Anything could conceivably happen at this point," said Dr. Michael Bitzer, a political science professor at Catawba College.

He said President Trump doesn't have to physically be at the convention in order to accept the nomination.

"The President -- all he has to say is, I accept," said Bitzer. "That can be from anywhere."

"The more logistical part, the more celebratory part, is indeed an acceptance speech that the president gives to lay out his vision for the general campaign," he added.

Technically the president could send a letter, a tweet, a phone call or other form of communication to accept the nomination. He could also give a speech from anywhere, Bitzer said.

But if the president decided to actually give an acceptance speech from Charlotte, some security experts have some concerns.

"The concern here is that some organizations in Charlotte have stopped planning because of all of the change," said Vanessa Vaughn Mathews, with Asfalis Advisors. "Now we don't know where they are from a preparedness or planning perspective."

Originally, there were several nights of celebratory speeches and events planned for Charlotte. When North Carolina coronavirus health restrictions meant the president and the Republican National Committee could not hold a convention with full attendance, the celebratory events - including the president's acceptance speech - were moved to Jacksonville, Florida. The RNC’s procedural events, including the vote by the delegates to nominate a party candidate, are still scheduled to be held in Charlotte.

Last week, Trump announced the cancellation of the Jacksonville events citing safety concerns after a rise in coronavirus cases in Florida.

Since then, it has been unknown where Trump would give his acceptance speech.

As recently as Wednesday at the White House, Trump refused to announce a location. As he did Monday while visiting North Carolina, Trump instead teased ahead to a forthcoming announcement.

“All I know is I’ll be in North  Carolina,” Trump told Raleigh NBC affiliate WRAL on Monday. ”I am really honored to do it in North Carolina.”

Following Thursday's announcement that Trump could yet be coming to Charlotte for some portion of the RNC week, the city of Charlotte released the following statement:

The Republican National Committee has not informed the City that the President intends to travel to Charlotte next month to attend any business meetings or any events related to the convention portion being held in Charlotte. Questions about the RNC’s plans should be addressed by the RNC’s Committee on Arrangements.

The City of Charlotte said in a statement last week, “We have an agreement in place with the Republican National Committee to host a substantially scaled down business meeting and that is what we are planning to do.”

In an email from City Attorney Patrick Baker to the RNC’s legal team on July 20, it notes the Arena License Agreement was terminated July 15.

WCNC recently checked in with several spots in the Charlotte area that could potentially host an acceptance speech including Charlotte Motor Speedway, Bank of America Stadium, and Truist Field.

All said they have not been contacted by RNC officials in regards to a speech.

The Carolina Panthers said nothing is being planned at Bank of America Stadium. The Charlotte Knights said the RNC has not been in contact about the use of Truist Field since their relocation to Florida.

The Iredell County Sheriff's Office, which has jurisdiction over the Trump National Golf Club on Lake Norman, said it has not been contacted by anyone regarding a speech by the president being hosted there either.

“He’s welcome to come, but nothing has changed about our resolve to keep healthy and safety first,” Cooper said.

...then tell them they will not be able to gain entry. Governor Cooper is still in Shelter-In-Place Mode, and not allowing us to occupy the arena as originally anticipated and promised. Would have showcased beautiful North Carolina to the World, and brought in hundreds of...

Trump publicly criticized Cooper in June saying the governor was "not allowing us to occupy the arena as originally anticipated and promised."

The state of North Carolina remains in Phase 2 of its coronavirus reopening plans. Restrictions allow limited capacity at inside venues, including arenas and restaurants. Bars remain closed across the state and the governor has also issued a statewide mask mandate in public spaces.

RELATED: Charlotte city councilman hopes new RNC plan can be made for Charlotte

Convention events are scheduled to begin in Charlotte on Monday, August 24 with an acceptance speech anticipated on Thursday, August 27.

The last president to accept a party's nomination without physically being at a convention was Franklin D. Roosevelt, who accepted the 1940 nomination on the radio. 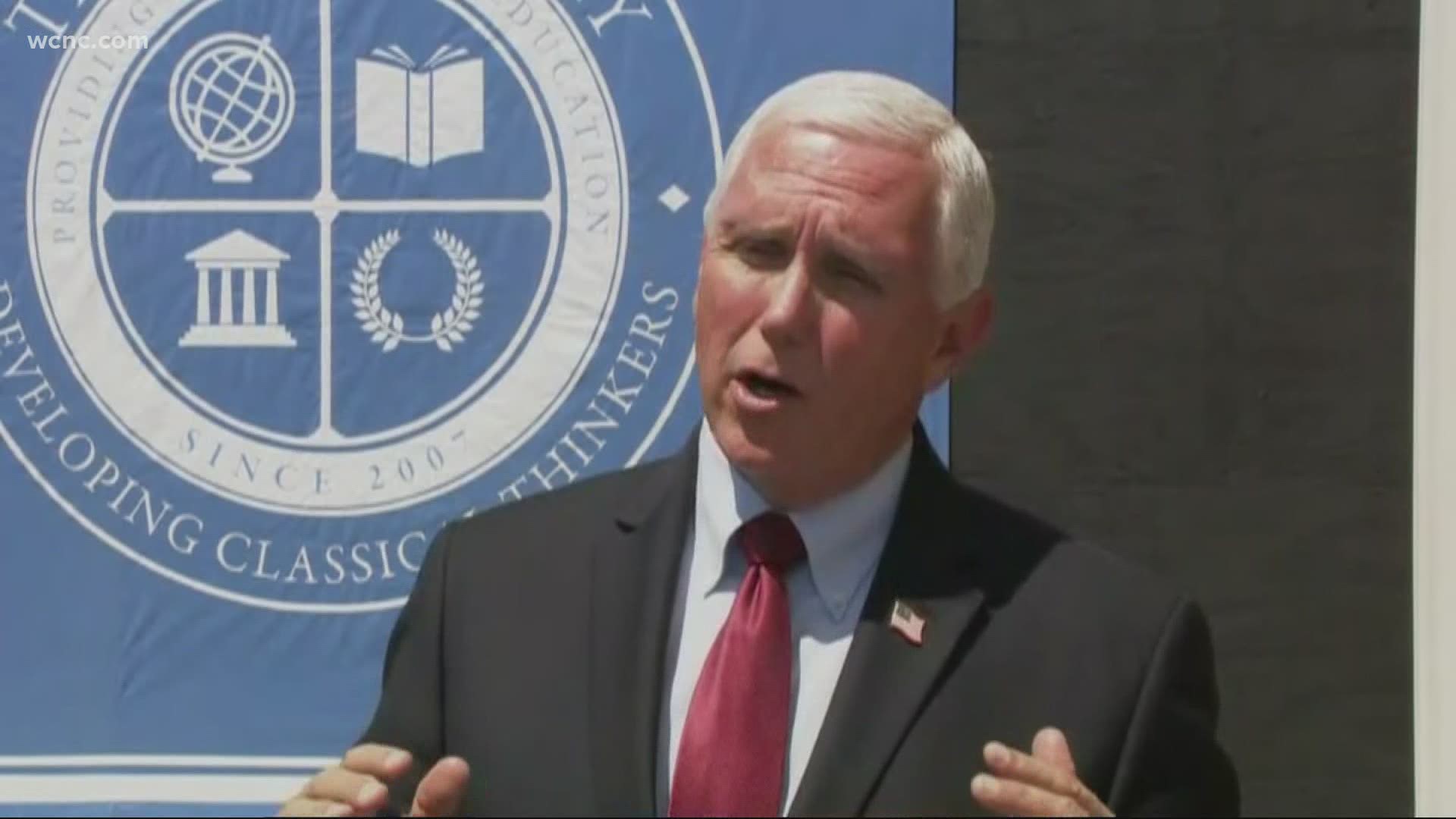