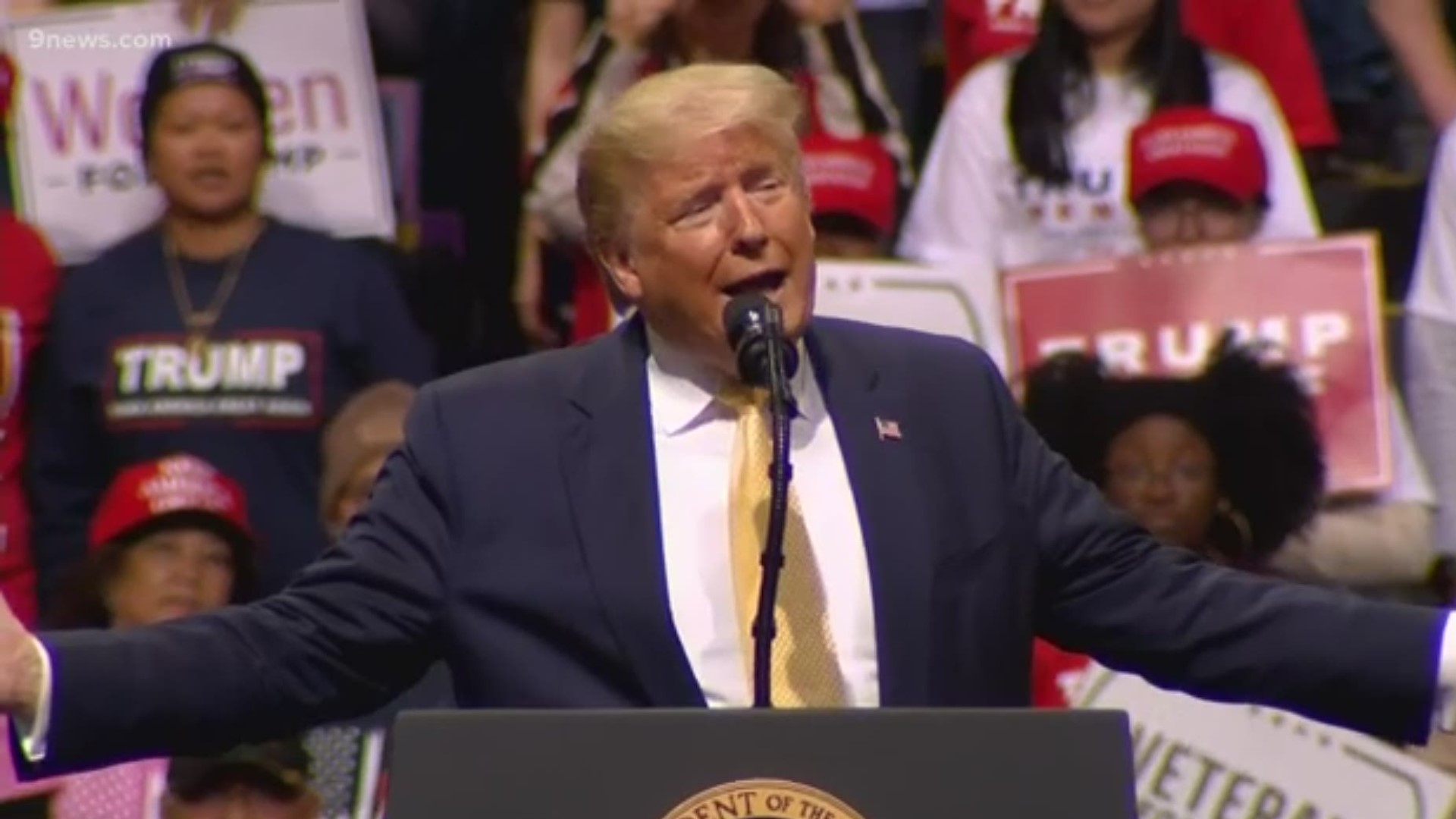 Trump, who walked out to “God Bless the U.S.A” by Lee Greenwood, opened his speech with, “Where else would you like to be but a Trump rally?”

He then commented on the “thousands of fantastic, hardworking Americans in Colorado,” before saying the GOP is going to win Colorado by a landslide. Trump thanked Gardner, who also spoke earlier, for being with the Trump Administration 100%.

Trump recognized the Iwo Jima anniversary and welcome several veterans. He then turned to “fake news” and took aim at Democratic candidates’ performances at Wednesday’s debate. 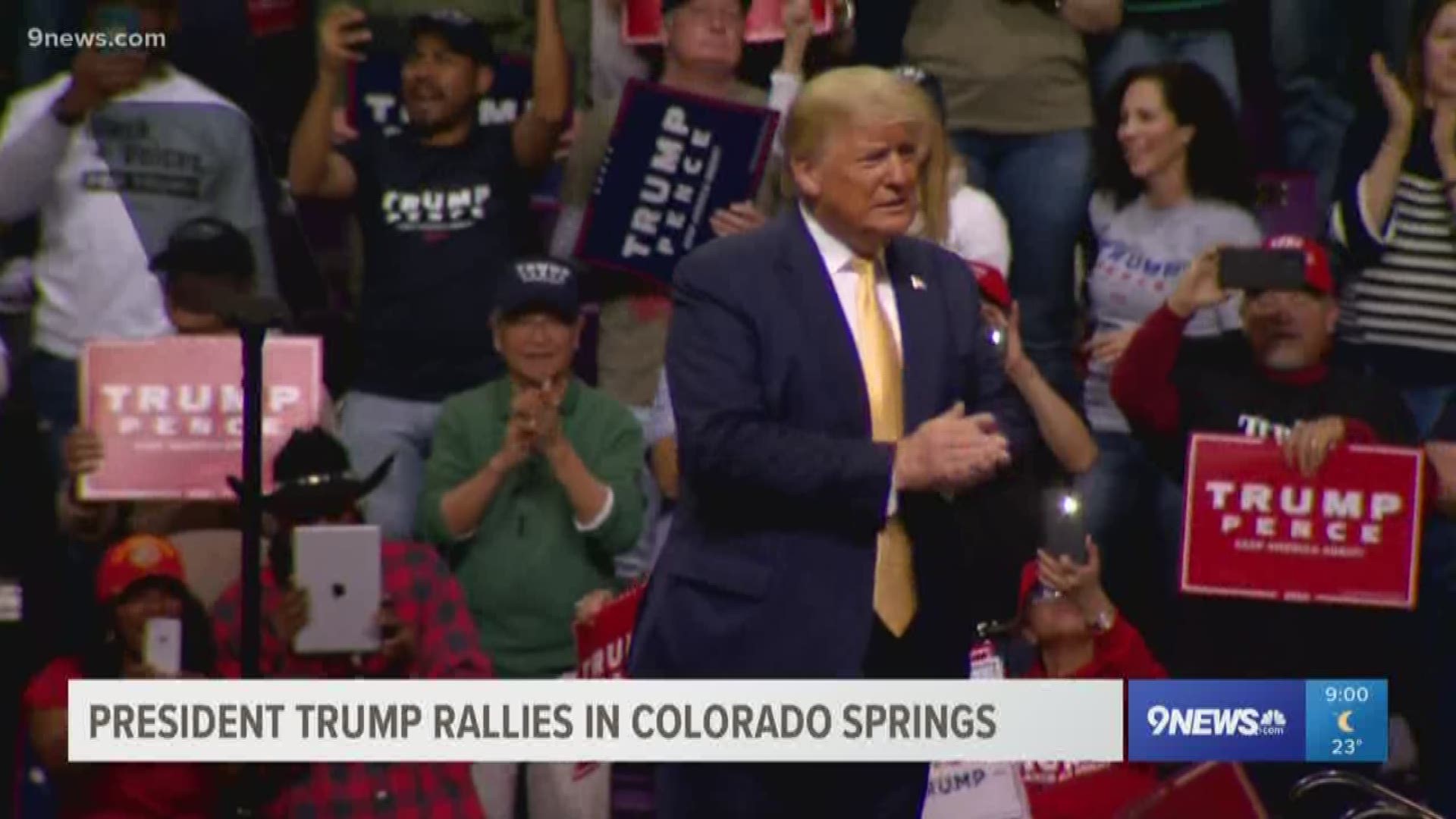 Trump said former New York City Mayor Michael Bloomberg, who made his debate debut after entering the race late, “made a fool of himself,” and choked. He told the crowd it’s not so easy up there, referring to the debate stage.

RELATED: Bloomberg struggles to respond to politics of #MeToo era

Trump then spent time reading from old Time magazines and poll results touting how well he did in debates, reminding the crowd again the he “did great in the debates.”

“I became president because of the debates,” he said.

Trump also mentioned “crooked Hillary” and her emails, draining the swamp, saying how deep and full of garbage it was, and losing Time’s Person of the Year to Greta Thunberg.

“They don’t like me,” Trump said refering to Time Magazine, “and I don’t like them either by the way.”

The crowd, which was a sea of red MAGA hats and USA shirts, welcomed the president, laughing at his comments, cheering loudly and breaking into chants including “four more years,” U-S-A,” and plenty of “boos” when Trump spoke about Democrats, the media and the second amendment “being under attack” as he put it.

About 45 minutes into his speech Trump touted job creation, investments in military, the Space Force and “destroying ISIS.”

“America is respected again like never before,” he said, then added that many Democrats are leaving the party to join the GOP.

Dana White, the president of the Ultimate Fighting Championship (UFC), was invited on stage. White said he’s a good friend of Trump, calling him loyal and a good man.

“That was beautiful,” Trump said about White. “We get tired of hearing from politicians.”

Gardner was again welcomed to the stage, where he called Democratic nominee hopeful Sen. Bernie Sander’s socialism “dangerous,” then said the party wanted to “take our guns and health care.”

Gardner talked about the Bureau of Land Management moving to Colorado and Space Force currently operating out of Colorado Springs. 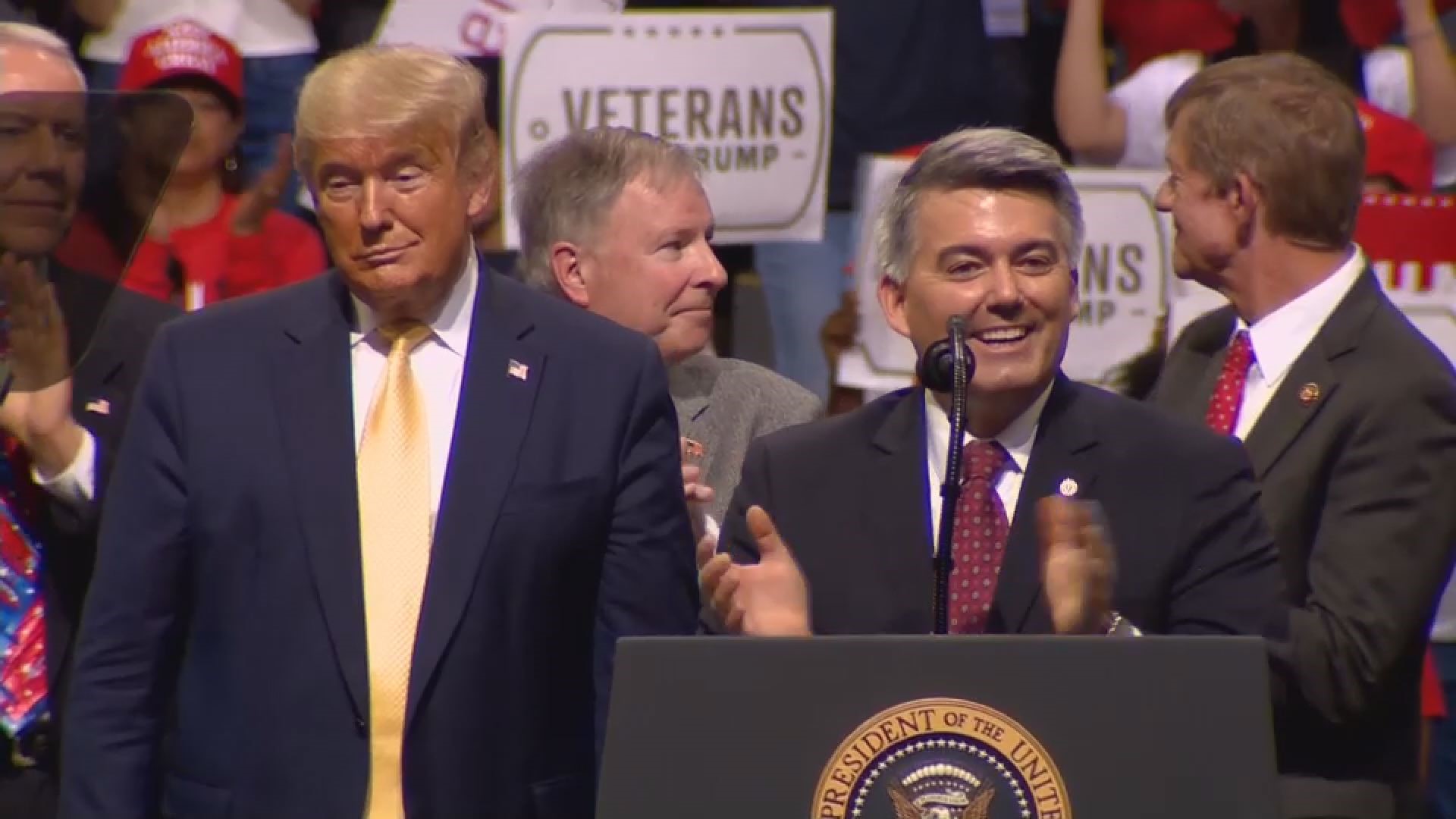 “Cory is a champion of the people of Colorado,” Trump said after Gardner spoke. “he does the tractor thing, he sells a certain type.”

He said African-American and Hispanic-American poverty has plummeted in the country and he plans to better-paid family leave and reduce the cost of childcare.

“We have the best economy in history,” Trump said. “We are doing better than any country in the world, it’s not even close.”

RELATED: Trump apparently not a fan of 'Parasite'

He asked voters to support Gardner for six more years and before leaving the stage he said:

Pence, who took the stage before Trump, talked about record turnout in Iowa, job growth, and the president being cleared of all charges after the impeachment hearings.

He also touched on border security, fighting terrorism, including the death of Qasem Soleimani, and the Second Amendment.