Truth Test: Claim from Gardner's mom about pre-existing conditions leaves out one detail 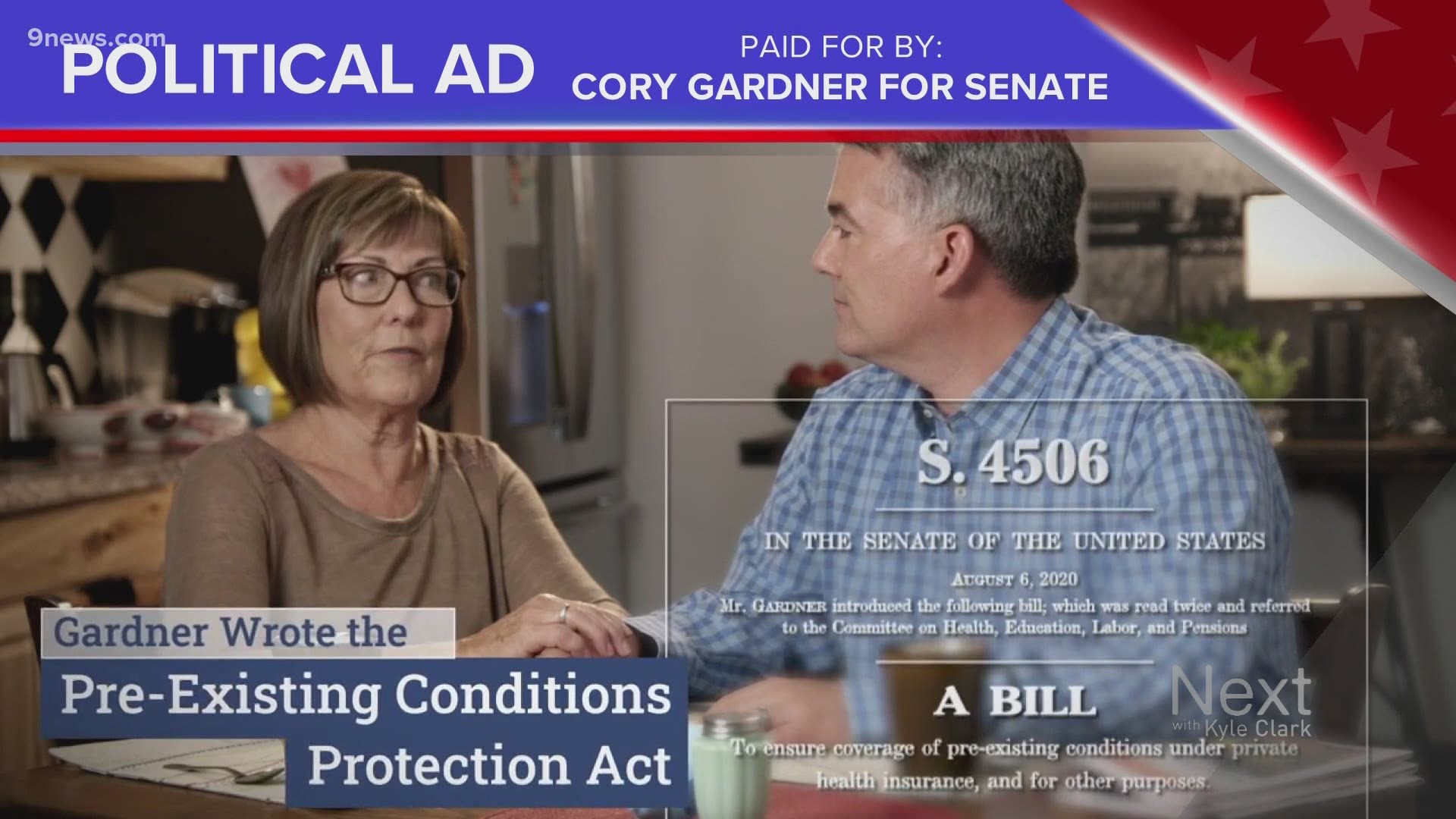 DENVER — If you can't say something nice, don't say anything at all…is a mantra that does not apply when doing a Truth Test, even when the political ad includes claims by the mom of the Republican Senator.

A mom who is also a cancer survivor.

The ad, entitled "Forever," is paid for by Cory Gardner for Senate.

Gardner: "No matter what happens to Obamacare."

VERDICT: (Insert bashful font). This author's mom taught him to say something nice, so let's start with a positive. Yes, on Aug. 6, just before the U.S. Senate went on break, Gardner introduced bill S. 4506. The bill text is eight lines long, when you open it in PDF form. It's entitled: "To ensure coverage of pre-existing conditions under private health insurance, and for other purposes."

It's not accurate to say "forever." The Affordable Care Act currently covers people with preexisting conditions and if it's repealed, a new bill requiring it would need to be signed into law. There's no guarantee that would happen. Even if Gardner's bill was needed and signed into law, it could be repealed later. Saying forever is not true.

AD/CLAIM: "No matter what happens to Obamacare."

VERDICT: This is also not true.

If Obamacare -- the Affordable Care Act -- were to be repealed, insurance companies wouldn't necessarily be required to take you on in the first place.

Gardner's bill addresses insurance companies having to cover people with preexisting conditions, but it does not include a guarantee provision, which is currently in the Affordable Care Act, that does not allow an insurance company to deny coverage.

The Affordable Care Act is 906 pages long, and includes a section on page 38 entitled, "Guaranteed Availability of Coverage."

If the Affordable Care Act were to be repealed that guarantee goes away with it.

Earlier this month, a Colorado Sun article also explored what Gardner's bill would and wouldn't do.

"Gardner's bill contains no such explicit provision," the article stated, referring to guaranteed coverage, where a health insurer couldn't deny selling someone coverage. The article quoted Nicholas Bagley, a law professor at the University of Michigan and a national expert on health law. He told the Sun that insurers, "could altogether refuse to sell coverage to that person. I don’t care what Senator Gardner’s office thinks the bill says. That’s in fact what it says.”

In an email, Gardner's campaign spokeswoman defended the bill.

"One thing is 100% true: Cory Gardner authored the bill and he says it guarantees coverage, which means insurers would be required to cover and take on individuals with pre-existing conditions," wrote spokeswoman Meghan Graf.

Graf also provided a link to American Action Forum, a conservative-leaning non-profit, to defend what Gardner believes his bill does.

As we found in two previous Truth Tests (here and here), Gardner has a history of voting to repeal the Affordable Care Act or limit its funding. Requiring coverage for preexisting conditions currently exists under the Affordable Care Act. As we stated in both of those Truth Tests, Gardner had a voting history like that when he was a Congressman, prior to voters electing him as Senator in 2014.

Bottom Line: Gardner's bill isn't needed right now because the Affordable Care Act covers people with preexisting conditions. Based on the minimal wording of Gardner's bill, it does not require insurance companies to sell coverage to someone with preexisting conditions, it just requires coverage if the insurance company takes that person on in the first place. And no bill is forever. Otherwise, the Affordable Care Act would be permanent, and this bill absolutely wouldn't be necessary.