9 political ads aired during Next, so here are multiple Truth Tests

Those ads have claims about both John Hickenlooper and Andrew Romanoff in the midst of the Democratic Senate primary race. 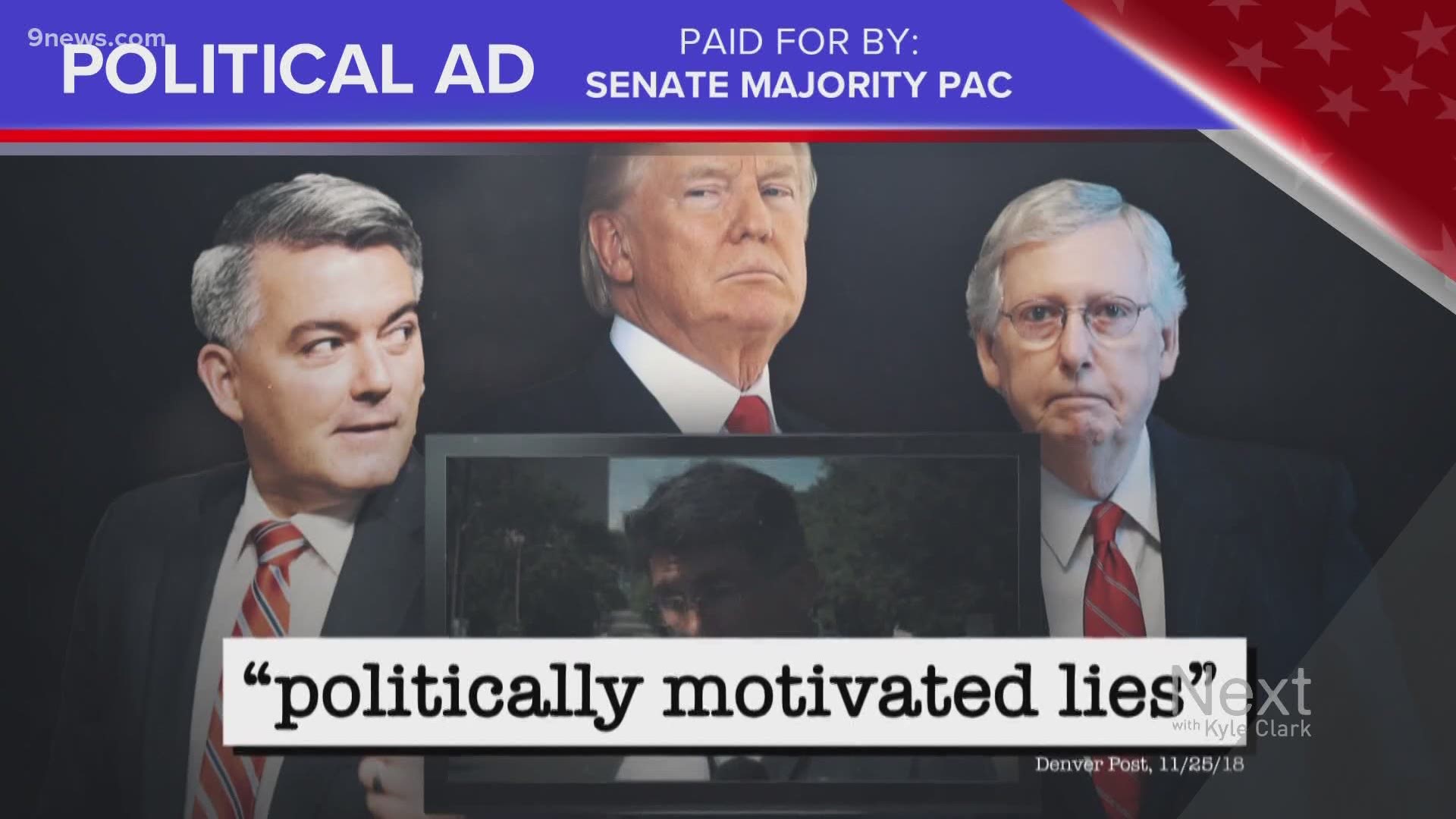 The primary election is on June 30 -- more than a week away.

Let's take a look at the claims in some of the ads.

Let's Turn Colorado Blue is a Super PAC that was just created, as in less than two weeks before the primary election. Campaign finance filings show that the committee has spent more than $1 million to oppose Romanoff.

The name listed on the filing is Mannie Rodriguez, a name familiar among Colorado Democrats.

AD CLAIM: "He was supposed to stand with Colorado. Andrew Romanoff stood with the Republican governor, passing the nation's harshest anti-immigrant laws."

VERDICT: This is fair and mostly true.

This is a topic that Romanoff has spoken about for more than a decade and has tried to apologize.

First, the nit-picky part of this claim. The quote read by the narrator and shown on screen says, "nation's harshest anti-immigrant laws," while also showing the headline from a Denver Post article from July 2006.

That quote does not appear in that Denver Post article. It was actually spoken by one of Romanoff's former challengers for U.S. Senate, Lorena Garcia. While running for the Democratic nomination, Garcia said that quote. It's misleading to show both on screen together.

As for the content itself, it's true that Romanoff supported two bills targeting people in the country here illegally. One bill, Senate Bill 90, required local law enforcement to notify federal immigration agents if they suspected someone of being in the country illegally.

Romanoff has talked about his support of both bills while running for Congress in 2014, and when he ran for Senate in 2010.

Last September, he wrote an op-ed posted on Medium.com explaining his thought process and what he says he should have done. Regarding his vote on requiring local law enforcement to notify ICE agents of people suspected being in the country illegally, he wrote, "The measure proved dangerously broad and expensive. It produced unintended consequence I deeply regret."

The ad attacking Romanoff is paid for by a group who received contributions from donors we won't know about until after the primary because of campaign finance deadlines.

Curtis Hubbard, who is acting as a spokesperson for Let's Turn Colorado Blue, provided this statement from Rodriguez, the group's founder.

“We could not sit idly by as the Romanoff campaign continued to attack John Hickenlooper and Cory Gardner and national Republican groups jumped into the middle of this primary — running millions of dollars in negative ads aimed at taking down Hickenlooper. “Let’s Turn Colorado Blue is made up of people who know that our best shot at defeating Cory Gardner is with John Hickenlooper, a proven and effective leader who will look out for all of us.”

When asked again about why or why not make it clear to third party groups that Hickenlooper is not interested in negative ads being run that may assist him, the campaign didn't directly answer.

"As we said, our campaign is the only campaign running positive ads, and we wish others would focus on the issues and not personal insults," said Miller.

The Senate Majority Political Action Committee, which is aligned with Senate Minority Leader Chuck Schumer (D-New York) has an ad defending Hickenlooper from a recent political ad by the National Republican Senatorial Committee

That ad focused on the Colorado Independent Ethics Commission ruling that Hickenlooper violated the state's gift ban twice while governor.

AD CLAIM: "The truth is 95 of the 97 Republican allegations were dismissed."

VERDICT: This is spin.

Yes, Hickenlooper was the subject of multiple complaints from the conservative group, Public Trust Institute, created by former Republican House Speaker Frank McNulty. The group accused Hickenlooper of violating the state's ethics law on receiving gifts above a certain amount ($59 by 2018).

The list of trips added up to 97, but the group added even more in an amended complaint.

The commission refused to look at any trip earlier than one year prior to the complaint because of a one-year statute of limitations. That means, the 70+ listed trips prior to October 2017 weren't even scrutinized by the commission.

Two dozen trips happened between October 2017 and October 2018. The commission investigated six of those trips. Some of those six included multiple allegations within one trip.

It's spin to say that 95 of the 97 allegations were dismissed.

In the end, the commission determined that Hickenlooper violated the state's gift ban on two of those trips. They fined Hickenlooper $2,750, the amount of the benefit he was deemed to have received multiplied by two.

In one of Hickenlooper's own political ads, he highlights his work as governor with quick references to multiple issues.

One of those claims is most relevant right now.

The part about body cameras isn't to the level achieved by the new police reform bill signed into law by Gov. Jared Polis on Friday.

In 2015, Hickenlooper signed into law a bill that had transparency in the title.

When an officer is involved in a shooting and the district attorney determines that no charges will be filed, the DA must issue a report explaining why there were no charges.

As one example, the Denver District Attorney's Office has a web page dedicated to "officer-involved shooting investigations and decision letters."