The first ad bashing the amendment to give Coloradans universal health care has started airing on television. 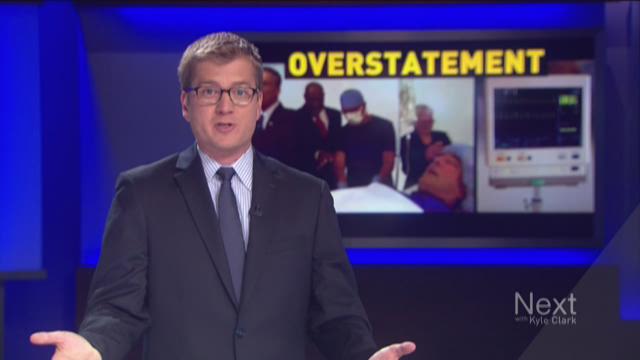 The first ad bashing the amendment to give Coloradans universal health care has started airing on television.

It starts with a man on a motorcycle trying unsuccessfully to jump a building while the narrator says,

“Sometimes you just know a bad idea when you see one.”

Then, it lays out a list of reasons why Coloradans for Coloradans think Amendment 69 is a bad idea.

ColoradoCare would collect $25 billion in taxes during its first year according to the state’s nonpartisan budget analysts, but that doesn’t tell you the whole story.

The new 10 percent income tax would replace people’s healthcare premiums, which could end up costing less for many families if the board running ColoradoCare doesn’t increase the tax rate.

That’s in part because the new tax would be split between employers (6.7 percent) and employees (3.3 percent).

For example, the average Colorado family who got health insurance through an employer in 2014 paid about $4,500 in premiums, according to the Kaiser Family Foundation.

During that same year, the median household income for the Denver metro area was just shy of $70,000.

If ColoradoCare operated back then, that family would have saved about $2,200. They would pay about $2,300 in “premiums” in the form of a tax to fund the state health plan.

Their employer would pay about an additional $4,600, which is significantly less than the average $12,000 a year that employers paid in 2014, according to the same KFF study above.

Whether those taxes (along with existing money from the state and federal governments) would be enough to cover ColoradoCare’s costs is a subject major debate.

A Colorado Health Institute study says no, but supporters of the Amendment say yes.

The funding conundrum is part of the reason prominent Democrats like Gov. John Hickenlooper and Sen.

Colorado spent about $26 billion during its last fiscal year, so adding an additional $25 billion would effectively double the state budget.

That’s a huge increase, but it’s that big for a reason—this is what it costs to cover everyone’s healthcare in Colorado for a year.

According to KFF’s most recent study in 2009, Colorado spends a total of $30 billion annually on healthcare.

It’s worth pointing out that the doubling of state government is to add a new service, not to increase funding to the things the state government already provides like schools, roads or state agencies.

CLAIM: Amendment 69 would give Colorado the highest income taxes in the country

This claim depends on how you make your money.

The very top rate anybody would pay in state income taxes in Amendment 69 passed would shoot up to 14.63. (It’s a flat 4.63 tax rate today.)

That’s higher than the current leader, California, which taxes its residents at 13.3 percent.

The income tax would not be highest in the nation for workers. Because the employer picks up most of the tax increase for workers, employees would pay a state income tax rate of 7.93 percent. Their employers would also pay 6.7 percent.

The highest rate would be charged if your income came from a source other than a paycheck.

That would apply to a wide array of people. An investor would pay 14.63 percent on the income they make from their portfolio, but so would retirees on fixed incomes because the new law considers pensions and social security to be “non-wage” income. However, retirees would collect their first $20,000-24,000 without paying any state income tax because of an exemption in state law. (Retirees age 55-64 don’t pay income on the first $20,000. Retirees 65 and older are exempt to the higher amount of $24,000.)

There’s another wrinkle that makes Amendment 69 hard to compare to California: No matter how you earn money, the new tax would only applies to the first $350,000 of income for single filers and $450,000 for joint filers. California’s highest tax bracket has no ceiling, meaning a person with multi-million dollar earnings is going to pay 13.3 percent on those millions.

Whether Amendment 69 sets up a fair system and a fair price to pay for universal healthcare is up to the voters.

This ad implies that the state is going to make the sort of decisions that are made in doctors’ offices, but it’s important to remember that ColoradoCare is creating a state-run system for health coverage, not health providers.

The doctors wouldn’t be working directly for the state, but they would have to work with the new state system to get paid.

The idea to have everybody in one payment system, replacing traditional private-sector insurance.
ColoradoCare’s administration would not be in the hands of the state legislature, but it would have its own political machinery.

Amendment 69 directs the governor and legislature to create a 15-member interim board who would lay the groundwork for ColoradoCare.

The interim board would coordinate with doctors as well as state and federal agencies before the launch of the single-payer system in 2018. It would also write the rules for electing and overseeing an official 21-member board.

That official board would be elected by Coloradans and be responsible for running ColoradoCare.

Decisions made by the payment system for healthcare could certainly have an influence on the decisions doctors make-- financial policies can encourage or discourage everything from ordering tests to prescribing cheaper drugs. But it’s worth noting that the Amendment 69 doesn’t come with a set of rules that dictate how doctors will treat their patients—nor does it seek to make those doctors employees of the state.

BOTTOM LINE: This ad doesn't abuse the facts, but it does oversimplify some aspects of Amendment 69 to cast the proposal in the least favorable light.