Truth Test: Did Trump mock a man with a disability?

Supporters of Hillary Clinton are spending millions to try and undermine Donald Trump before next month's national conventions. The ad getting the most airtime in Colorado right now doesn't go after Trump on policy, but attacks his character instead. 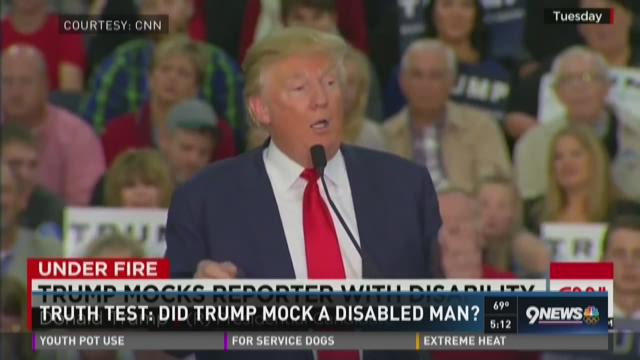 Supporters of Hillary Clinton are spending millions to try and undermine Donald Trump before next month's national conventions. The ad getting the most airtime in Colorado right now doesn't go after Trump on policy, but attacks his character instead.

The ad in question comes from Priorities USA, a pro-Hillary Clinton Super PAC.

It features a couple with a disabled child highlighting a speech in which Donald Trump appears to make fun of a reporter with a disability.

"When I saw Donald Trump mock a disabled person, I was just shocked,” says Lauren Glaros before the ad cuts to a clip of Trump making a serious of awkward hand gestures and speaking in a strained voice.

"You gotta see this guy,” Trump says in the comments he made late last year.

"That reporter he is talking about suffers from a chronic condition that impairs movement of his arm,” explains Chris Glaros.

It is true that the reporter, Serge Kovaleski of the New York Times, has a joint condition called arthrogryposis, which causes his right hand to rest held up in a bent position.

To the bigger claim, that Trump was mocking Kovaleski’s condition, we rate this attack as "fair."

If you compare the pose that Trump made you can see it's quite similar to Kovaleski's condition.

Trump later claimed he wasn't mocking the reporter, that he didn't even know him.

But, as the factcheckers at PolitiFact explain in great detail, the record doesn't support that. Kovaleski covered Trump as far back as the 1980's and says they were on a first-name basis.

If you roll the video just before what appears in this ad, Trump acts like he is familiar with Kovaleski, calling him "a nice reporter."

Trump says this wasn't about the disability, but a story Kovaleski wrote a week after the 9-11 attack.

That story said police questioned “a number of people” celebrating on rooftops after the attack on the World Trade Center.

Trump had used that to back up his debunked claim that thousands of Muslims in New Jersey publicly celebrated the attack.

When asked, Kovaleski said he couldn't remember any mention of hundreds or thousands celebrating, just what he wrote in his article about some people being questioned by police. Kovaleski still stands by that report.

BOTTOM LINE: We can't prove what Trump was thinking when he made the gestures in this ad, but Trump's own explanation of it doesn't add up.

The physical gestures he made (combined with his decades-old history with the reporter) certainly provide a solid foundation for this ad's claim.