With a week to go in the Denver mayoral race, challenger Jamie Giellis is out with her first TV ad. We put it to a Truth Test. 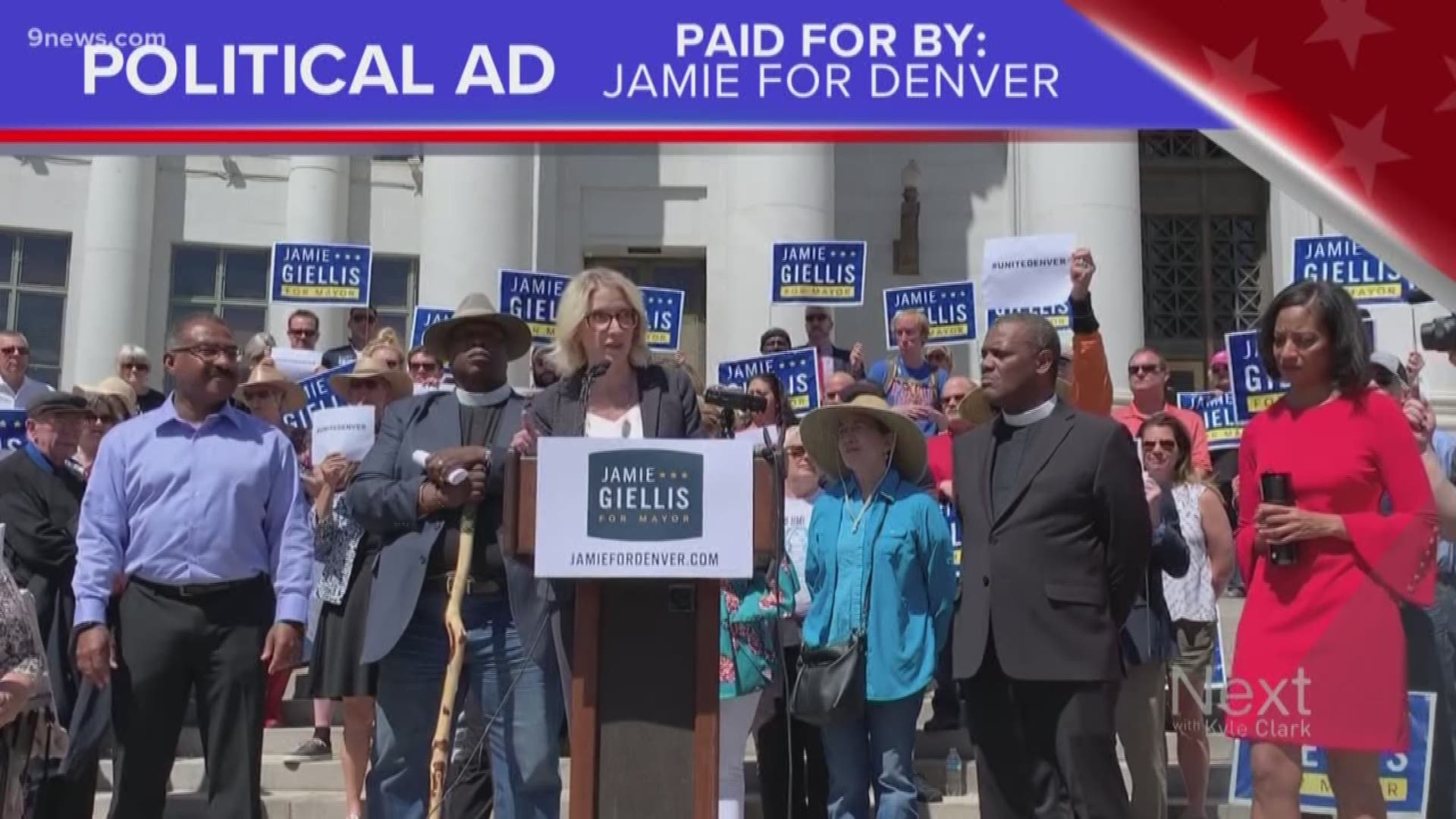 DENVER — With one week to go until we know who the next Denver mayor will be, challenger Jamie Giellis is out with her first political ad.

The ad starts with Giellis narrating saying, "We are uniting Denver," with video of her standing with former mayoral challengers Penfield Tate and Lisa Calderon.

In the May 7 election, Giellis finished second, and since mayor Michael Hancock received less than 50%, there was an automatic runoff set for June 4. Calderon finished third and Tate finished fourth. On May 13, both Calderon and Tate announced they were supporting Giellis.

CLAIM: "I'll take action to rein in out of control growth and housing costs."

VERDICT: The claim is vague, and a mayor cannot do either of those alone.

The 13-member Denver City Council can impact growth because the Denver City Charter gives the council the power over zoning issues.

Here is the council's "grant of power" from the City Council zoning section of the city charter:

For the purpose of promoting health, safety, morals or the general welfare of the community, the Council of the City and County of Denver is hereby empowered to regulate and restrict the height, number of stories and size of buildings and other structures, the percentage of lot that may be occupied, the size of yards, courts and other open spaces, the density of population and the location and use of buildings, structures and land for trade, industry, residence or other purposes.

As it relates to housing costs, a mayor just can't enforce a policy that reduces the rent on your $1,800/month one-bedroom apartment. The mayor, with the approval of city council, can address affordable housing programs that can help low income families get assistance with their rent.

VERDICT: Yes, a mayor can write policies that deal with ethics and sexual harassment. No, a mayor cannot pass them, they need to be passed by City Council. Although, the mayor can issue executive orders.

Giellis could issue an executive order creating policies and procedures for how city departments will handle employees accused of sexual harassment. Think of this link an addition to your employee handbook.

While the city can create policies and procedures for employees, sexual harassment itself is already a crime that police can investigate regardless of policy changes.

CLAIM: "And to finally start solving our homelessness crisis."

This is a claim without any specifics, so it gets a shrug. For historical purposes, even then-mayor John Hickenlooper had a 10-year plan to end homelessness by 2015, and we're still talking about way to solve the homeless situation in 2019.

Giellis' plan does not involve ending the city's current camping ban. In a video she posted to her campaign website over the weekend, she said "As mayor, I cannot and will not repeal the urban camping ban."

Whatever her stance is, this political ad does not provide specifics.

CLAIM: "Big developers had their mayor I'll be a mayor for Denver's future."

VERDICT: No real claim here, but let's ad context to what is likely being hinted.

Hancock has developers who have contributed to his campaign. However, so has Giellis. By a dollar amount, Hancock has received more contributions from developers than Giellis has, but it's better to look by percentage of overall contributions. However, because of how the city collects the campaign finance data, it's not as easy as downloading the information, sorting through Excel and then ending up with a round number. Since contributors self-report the information, the database is not uniform. Where one developer may classify their occupation as "developer," another may choose "real estate." 9NEWS is sorting through the data for a more accurate accounting.

BOTTOM LINE: The ad makes broad statements about what a Mayor Giellis would do for the city, without providing specifics as to how she would do them. In a response to a request for supporting information, her campaign emailed that the ad "doesn't include any Hancock smears or facts to truth test…There's no real fact check because she's focused on policies." Those policies are unclear based on this political ad. In a follow up email, her campaign wrote, "These are not claims of 'true or false,' simply reminding people of what she'll work towards as mayor." This ad has plenty of themes, but if you need to know specifically how those themes will get accomplished, this political ad does not address that concern.