Republican congressman Mike Coffman, who represents Aurora and surrounding areas, has yet to stake out a firm position on whether he'll support Donald Trump for the White House. 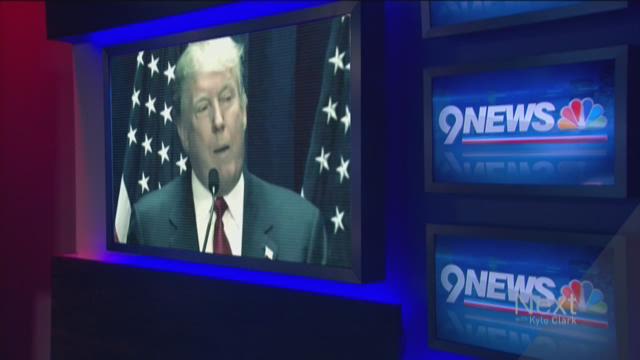 Republican congressman Mike Coffman, who represents Aurora and surrounding areas, has yet to stake out a firm position on whether he’ll support Donald Trump for the White House.

That's not stopping Democrats from trying to make the case the two men are cut from the same cloth.

Trump’s consistently trailed behind Hillary Clinton among likely voters in the Centennial State. And the movement to stop Trump at the Republican Convention this summer was spearheaded by a Colorado delegate.

It’s no surprise then that Carroll and the Democratic Congressional Campaign Committee would try to conflate the two men.

We checked to see whether the comparison is a fair one.

There’s a simple reason the answer to this claim by the DCCC is unknown: Coffman hasn’t publicly declared whether he’ll support Trump even though ballots mail out in less than two weeks.

While his campaign manager told the Colorado Statesman he would support the eventual GOP nominee, that statement was made after Trump lost in Iowa and was paired with a declaration that Coffman believed Rubio would win.

The latest we have from Coffman himself is that he’s undecided. When he released a TV ad promising to “stand up to” Trump, 9NEWS spoke to Coffman to clarify what he meant:

9NEWS: "Would you rule out supporting Donald Trump for president?"
COFFMAN: "No."

For this report, 9NEWS again asked the Coffman campaign if his stance on Trump has solidified. His spokeswoman Cinamon Watson told 9NEWS his position has not yet changed from undecided.

"Planned Parenthood should absolutely be defunded,” Trump told Fox News’ Chris Wallace in October 2015. “I mean if you look at what's going on with that, it's terrible."

That’s pretty straightforward, and so are Coffman’s votes to defund the organization.

His last vote on the issue was in January 2016. Coffman voted in favor a bill to repeal Obamacare that also would have cut Planned Parenthood’s funding for one year.

The bill, which passed the U.S. House of Representatives, doled out $235 million to community health centers. Republicans said that money would cover the gap in healthcare coverage left by defunding Planned Parenthood.

To the ad’s core claim of similarity between the two men-- it’s worth noting that this has been a consistent position for Coffman, who has voted numerous times on the pro-life side of the abortion debate, whereas Trump’s pro-life stance comes after a lifetime spent all over the map on the issue.

The Carroll campaign tees up this claim with a quote about Mexicans crossing the U.S. border from the speech Trump gave when he announced he was running for president.
“They’re bringing drugs. They’re bringing crime. They’re rapists. And some, I assume, are good people,” Trump said.

It’s one of many comments Trump’s made on immigration and border security that’s drawn criticism from the Hispanic community.

Carroll tries to tie those controversial comments to Coffman by using something the congressman said in 2011 about bilingual ballots. At the time, Coffman opposed a federal requirement to print bilingual ballots and suggested voters who struggle with English use a dictionary.

The quote is accurate, but it also doesn’t represent his current views. As reported by the Colorado Independent:

“During his 2014 reelection campaign, Coffman said, ‘I think that bilingual ballots should only go to people who need them. It’s a question of saving money.’”

To the ad’s broader implication that Coffman and Trump walk in lock-step on immigration issues, Coffman has undeniably moderated his views on the issue.

The shape of Coffman’s district changed in 2011. It went from being a staunchly conservative district to a swing seat with a significant number of Hispanic and immigrant voters.

Coffman says his new constituents changed him. He learned to speak Spanish, reversed his position on children brought to the U.S. illegally by their parents and even supported the idea of letting undocumented workers obtain work visas.

Democrats would spin that as pandering on the part of Coffman. Republicans would counter he’s making a good-faith effort to adapt to the wishes of his constituents.

Trump pushed the falsehood that Obama was born outside of the United States for years.

And even speculated about the death of Hawaii’s health director.

Coffman, did in fact, question Obama’s citizenship once during a fundraiser in 2012—but unlike Trump, he apologized years ago.

The four-term congressman walked that statement back soon after 9NEWS made it public.

“I misspoke and I apologize,” Coffman said. “I have confidence in President Obama’s citizenship and legitimacy as President of the United States.”

This is a faulty argument. More specifically it's a logical fallacy called "argument from silence."

RELATED: Truth Test: Did Trump mock a man with a disability?

However, saying nothing does not mean that Coffman agrees with Trump.

But it’s a big leap to say that’s proof that Coffman wouldn’t stand up to a President Trump.

Coffman criticized Trump in a campaign ad released in August and told 9NEWS he might vote for Libertarian Party candidate Gary Johnson.

"People ask me, 'What do you think about Trump?’ Honestly, I don't care for him much … ," Coffman said in the ad. “So, if Donald Trump is president, I'll stand up to him, plain and simple.”

Coffman did leave the door open for Trump, saying the Republican presidential nominee could still earn his vote.

His campaign says Coffman plans to make a decision about who to vote for when Coloradans receive their ballots later this month.

BOTTOM LINE: Trump and Coffman agree on some things and they've said some similar things. Coffman has also left room for these attacks by not talking about Trump.

But their connection isn’t as deep and far reaching as Carroll and the DCCC would like you to believe.