Senate Majority PAC's claims about Sen. Cory Gardner require more context. To use the food analogy from the ad, it's offered a three-course meal but forgot the app. 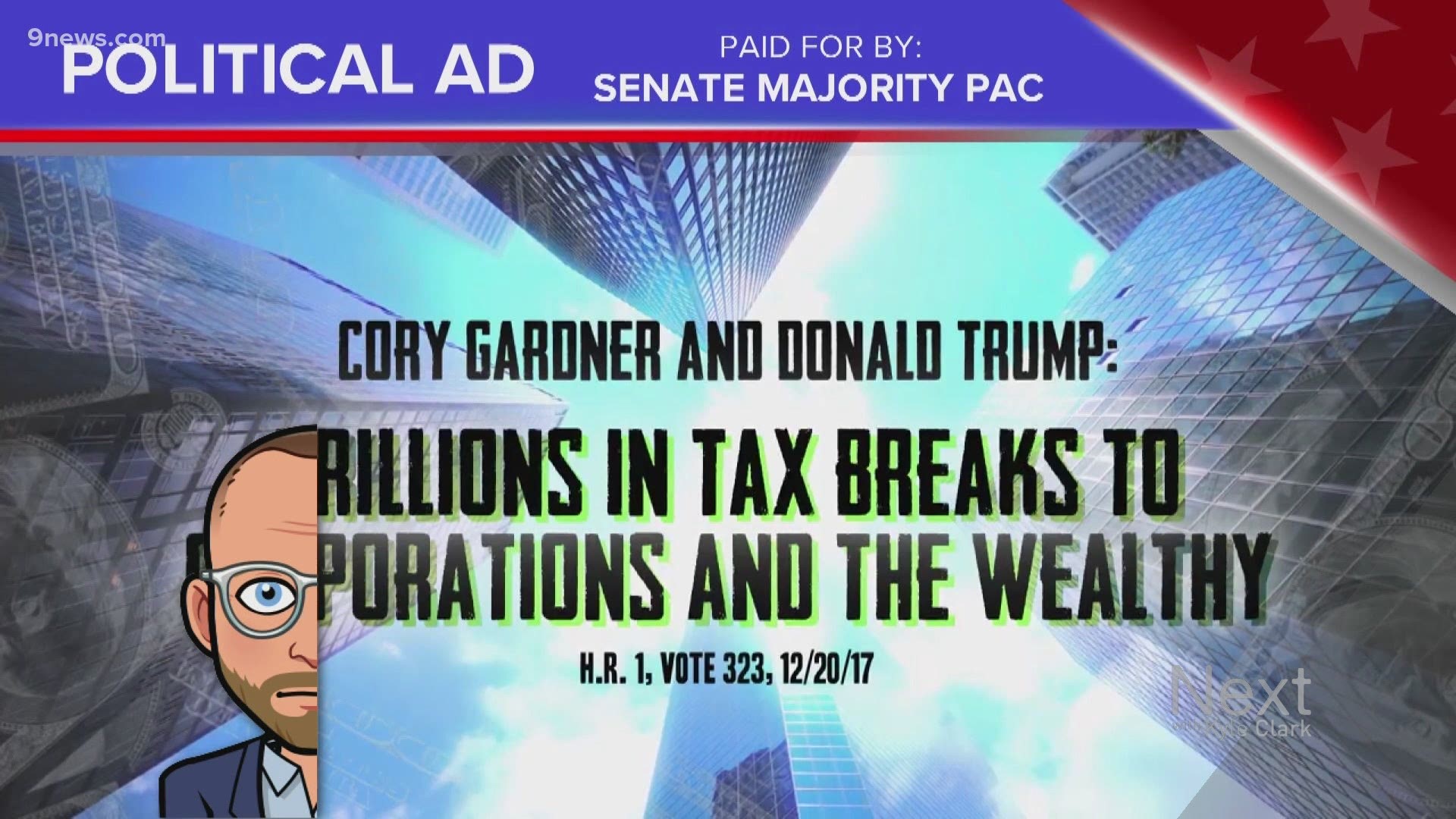 DENVER — Political ads have been airing for so long, the groups producing them are running out of new claims.

Senate Majority PAC is out with a new ad that rehashes a previous claim, and a similar claim made in an ad by Duty and Honor.

In a previous Truth Test, we explained how Duty and Honor is an offshoot of Majority Forward, which works with Senate Majority PAC, the political action committee connected with top Senate Democrat, New York Sen. Chuck Schumer.

Speaking of rehash, this political ad might make you hungry.

AD/CLAIM: "Peanut butter and jelly. Two things that go together. You know, like Cory Gardner and Donald Trump. Gardner and Trump gave trillions in tax breaks to corporations and the wealthy."

VERDICT: This only gives half the information.

Gardner supported, Congress passed and the president signed H.R. 1 in 2017. The Tax Cuts and Jobs Act changed the tax code and lowered taxes for mostly everyone, not just "corporations and the wealthy."

Analysis by the Tax Policy Center estimated the following tax cuts based on different income levels:

BOTTOM LINE: Yes, it provided high dollar tax benefits for "corporations and the wealthy," but most people who don't fit in that category also benefited.

VERDICT: As we covered in the Duty and Honor ad, Gardner has a voting history to weaken the Affordable Care Act, including coverage for those with preexisting conditions. However, voters should have known that when they elected him in 2014 in the first place.

The ad shows nine votes on the bottom of the screen, and are the votes Duty and Honor provided to 9NEWS as support for the August political ad.

The claim that Gardner has stood with Trump and voted nine times… is rhetoric.

Five of the votes referenced in the ad were prior to January 20, 2017, the date Trump was sworn-in as president.

AD/CLAIM: "Like macaroni and cheese, Gardner's stuck with Trump 98% of the time."

VERDICT: No, it's not that high.

The ad references "vote studies" by "Congressional Quarterly," which requires a subscription.

In a June political ad Truth Test, University of Denver political science professor, Seth Masket, explained what it means to vote with the president, since the president doesn't vote.

BOTTOM LINE: Senate Majority PAC is using previous claims that require additional context to continue to attack Gardner. This political ad has truth to it, but it does not provide the full picture. To use the food analogy from the ad, it's offered a three-course meal, but forgot the queso for our chips appetizer, misplaced the fork with our main course and didn't give us chocolate syrup for our vanilla ice cream.