Truth Test: When there’s an attack in a ‘clean’ campaign

You might have heard about an ad attack ad supporting Cary Kennedy during Monday's televised 9NEWS debate. 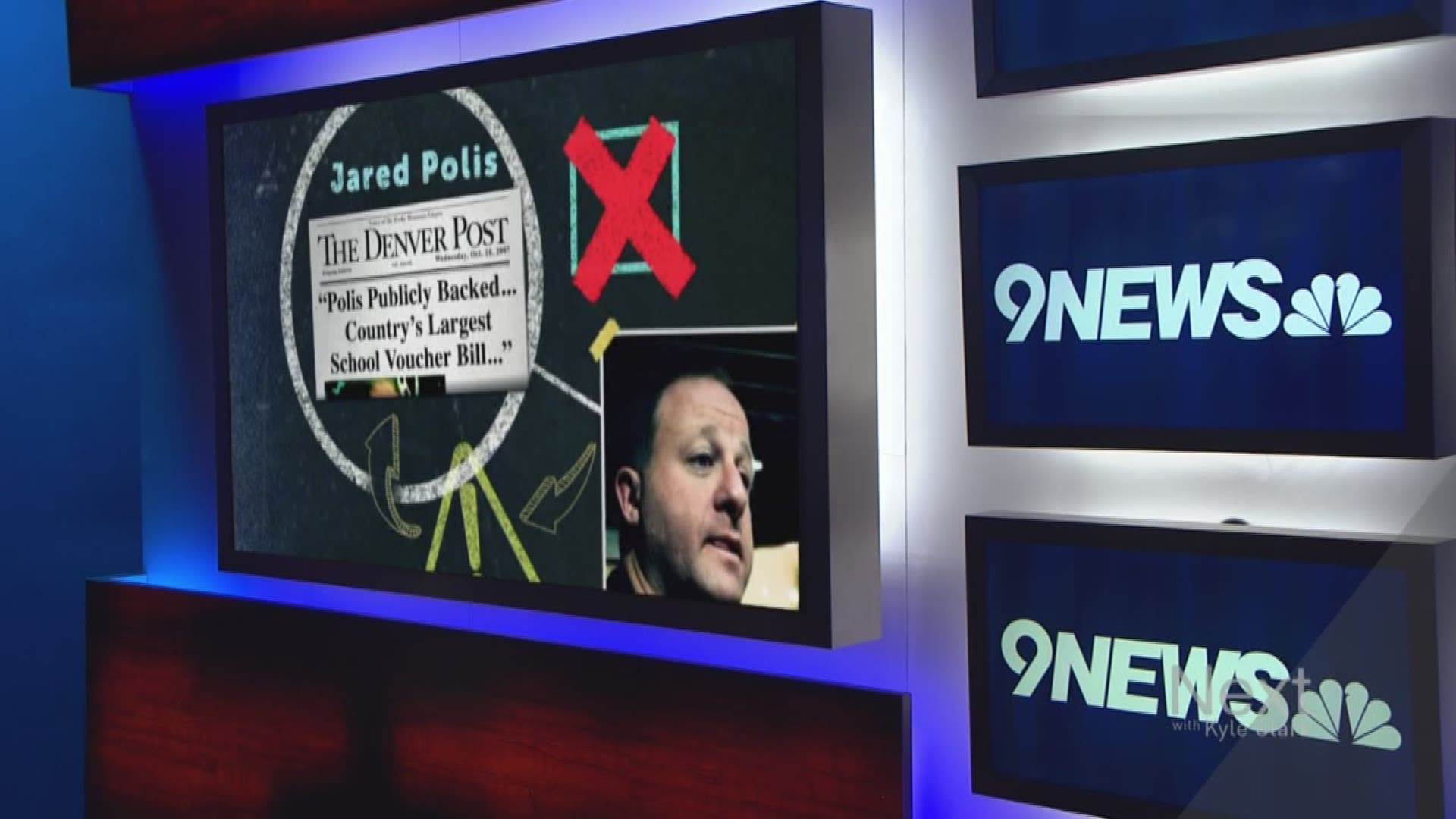 KUSA — DENVER— Things got testy in Monday’s televised debate between the Democrats running for governor when the conversation turned to an attack ad running in heavy rotation on Denver TV.

Some candidates accused Kennedy of violating the clean campaign pledge the Democratic candidates signed to avoid smears in the June 26 primary election.

The ad, complete with unflattering photos of Kennedy's opponents, comes from a group of her supporters called "Teachers for Kennedy."

Here we’ll factcheck both the ad itself and Kennedy’s problematic response when questioned about it.

Both of the attacks in the ad itself are based in true facts, but ignore important context.

It’s true that while a member of the state board of education, Polis wrote in support of a bill that included a limited pilot project that would have provided vouchers to poor students in some of the state’s worst-off schools—the ad ignores Polis’ track record of voting in opposition to vouchers as a member of Congress.

Polis later said the bill was amended in a way that he no longer supported before it passed.

This claim is not an outright falsehood, but it does ignore important context on Polis’ position on the issue.

This is really the opinion of the ad’s makers dressed up as fact.

The bill in question was intended to beef up teacher evaluations in the state.

The group running the ad considered it to be “anti-teacher,” but other teacher groups and left-leaning politicians thought it was good policy.

Things got interesting when the issue came up in our debate this week.

Johnston and Polis both accused Kennedy of going against the state party’s clean campaign pledge, which she signed.

The Teachers for Kennedy ad oversimplifies issues to make both candidates sound as bad as possible against a bed of ominous music.

Two lines in the pledge could apply in this case:

• I will encourage my supporters or volunteers to refrain from engaging in personal attacks or smears against the other Democrats in this primary race.

• I understand that primary attacks are short-sighted because I will need the support of the other candidates and their supporters to win a General Election, if I am the Primary nominee.

When asked in the debate about this, Kennedy replied that she doesn't like the tactics being used, “but we have to respect [Teachers for Kennedy’s] right to communicate with voters.”

It's true she can't force this group to stop running this ad on her behalf. But we pointed out (and so did some of the candidates) that she's perfectly free to ask this group to knock it off if she doesn't like the ad.

CLAIM: “It would violate campaign finance laws to say that.”

Kennedy’s assertion is wrong. Any candidate is, in fact, free to say they think their supporters went too far and that they should knock it off.

Candidates are given wide latitude to express their views for good reasons: the First Amendment protects free speech and political speech is seen as especially important because we elect people to power in our society.

Coordination is covered by something called “Rule 21” in the campaign finance rules. (page 144)

The rule does ban candidates from telling a group like this one to spend money. It’s considered coordination if:

21.1.1 A person makes an expenditure or engages in spending at the request, suggestion, or direction of, in consultation with, or under the control of that candidate committee or political party

That wouldn’t apply if Kennedy were to criticize the Teachers for Kennedy ad. The money has already been spent.

Another part of Rule 21 considers it to be coordination if the group and the candidate discuss things like ad strategy—but only in private.

The rule specifically says that the conversation between the campaign and the group has to be about “non-public information” in order to be considered coordination.

Publicly denouncing the ad wouldn’t run afoul of that rule either.

Kennedy’s campaign says their lawyer is giving them conservative advice to avoid a possible legal challenge.

But when we asked the Kennedy campaign to show us an example of somebody ever getting in trouble under Colorado law for criticizing an ad or asking it to be pulled down, they sent us none.

IT’S ABOUT THE MONEY

Fun fact:#COgov candidates can only take a max of $1,150 in donations from you in the whole election year.
But the state version of a SuperPAC (called an IEC) can take, well...#HeyNext #9NEWS pic.twitter.com/bpS7BndK1M

It's also worth pointing out that the only reason this even matters is to protect the ability of a group like Teachers for Kennedy to collect unlimited donations.

The biggest check you can write a governor candidate is for $1,150 the entire election year.

But you can cut a group like "Teachers for Kennedy" as big of a check as you want, as long as the group doesn't coordinate with her about the ads they run.

That’s how the group raised $2 million from just four donors.

The idea of the ban on coordination is to keep these groups independent, so they don’t act as the better-funded arm of a candidate’s campaign—creating ads tailor made to the campaign’s wishes.

In practicality, they tend to end up figuring out how to land some punches in a way that helps candidates all on their own.

BOTTOM LINE: The ad isn't outright false, but it is negative and ignores some important context. And Kennedy made a false claim about campaign finance laws to justify how she's handling it.