Colorado voters will weigh in on everything to the National Popular Vote to the reintroduction of wolves. 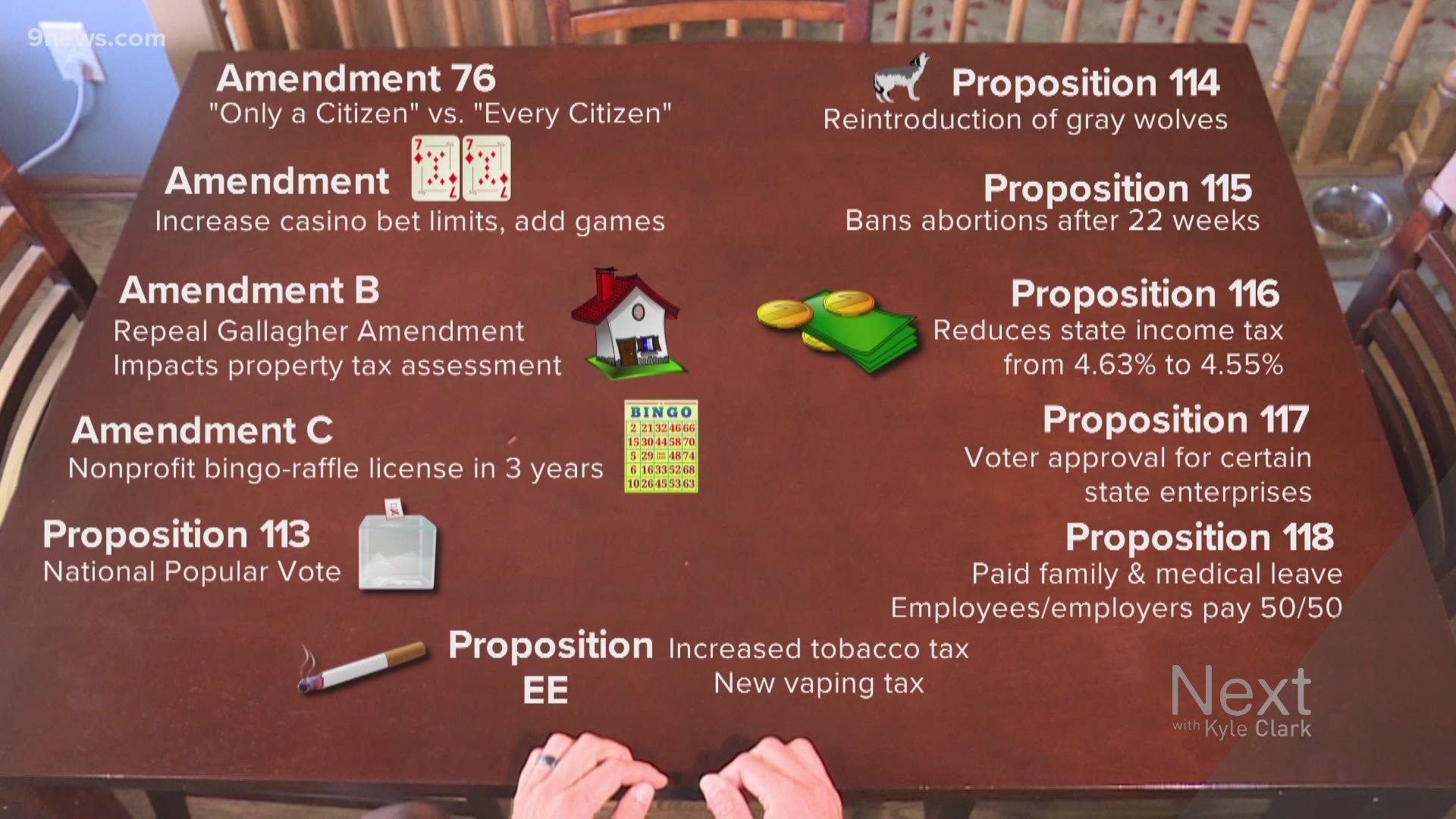 DENVER — Start cleaning your kitchen, you're going to need room at the table to study and fill out your 2020 Colorado election ballot.

The state staff responsible for the Blue Book finalized the wording on Thursday, and will have the statewide ballot issue cheat sheet off to the printer next week.

It will arrive in the mail in time to look at it side-by-side with your mail-in ballot, which get sent to voters on Oct. 9. The Blue Book will also exist online.

There are 11 statewide ballot issues. No matter where you live in the state, from Aguilar to Yuma, you'll have at least 11 issues to vote on. That's not even counting local city/county issues, school district issues, candidates or judges.

Denver voters have 12 local issues, so between the city and state issues, Denver voters will make 23 decisions just on these topics.

A NO vote keeps the wording as is.

Either way, Colorado voters must be 18 years old, registered to vote and have lived in the state for at least 22 days prior to the election.

A NO vote keeps the limits and gaming options in the Colorado Constitution as they are today.

Casinos in Colorado can have slot machines, blackjack, poker, roulette, craps and sports betting. A yes vote would allow voters in those gaming communities to vote for other types of games.

Tax revenue from new games and new bet limits would be allocated:

Community colleges would be allowed to spend the money on programs and services that promote student retention and degree completion programs.

The next two amendments were referred to voters by state lawmakers.

A YES vote repeals the Gallagher Amendment, which impacts the residential assessment rate for which property taxes are calculated. The assessment rate will remain constant and future decreases will not be required.

A NO vote keeps the Gallagher Amendment.

The Gallagher Amendment is complicated. Here's an excerpt from when 9NEWS reporter Ryan Haarer simplified it in a story from May:

A YES vote allows nonprofits to apply for a bingo-raffle license after existing for three years, instead of five. It would also allow charitable organizations to hire workers for those games, and pay up to minimum wage.

A NO vote keeps the five-year requirement for nonprofits to exist before applying for a bingo-raffle license. It would keep the provision that they are run by unpaid volunteers with the organization.

A YES vote puts Colorado in the National Popular Vote compact, which could one day give Colorado's electoral college votes to the presidential candidate who receives the most votes nationwide, and not necessarily the most votes in Colorado.

A NO vote keeps Colorado's electoral college votes tied to the presidential candidate who gets the most votes in Colorado.

The Colorado state legislature passed the National Popular Vote compact in 2019, but voters collected enough signatures to challenge it from taking effect, and instead, put it on the ballot for voters to decide.

RELATED: What a Supreme Court decision on electors could mean for national popular vote

According to the National Popular Vote organization, states totaling 196 electoral college votes (including Colorado) have agreed to the compact.

A YES vote allows Colorado Parks and Wildlife to reintroduce and manage gray wolves west of the Continental Divide by the end of 2023, and allows for fair compensation to be paid for livestock losses caused by gray wolves.

A NO vote means gray wolves will not be reintroduced.

A YES vote prohibits abortions in Colorado after 22 weeks unless an abortion is immediately necessary to save the life of a pregnant woman.

A NO vote keeps abortion legal in Colorado at any time in the pregnancy.

A yes vote would also create a criminal misdemeanor for a person who performs an abortion in violation of the new law. It would also require the state to suspend the physician's medical license for at least three years.

A NO vote keeps the state income tax rate at 4.63%

A NO vote keeps state enterprise authority with the state legislature.

Enterprises are user-funded entities, like the University of Colorado, Colorado State University, the Colorado Lottery and Colorado Parks and Wildlife.

Enterprise status can affect the state budget. Picture a bucket. The bottom of the bucket is filled with fees. On top of the fees is the tax revenue the state collects. Based on the Taxpayer Bill of Rights (TABOR), there is a formula that dictates how much the state is allowed to collect and spend year after year. By creating an enterprise, it takes that entity out of the bucket, perhaps giving the state more money to spend on schools, health care, corrections and other state-funded departments.

Enterprise status also grows the state budget and currently is overseen by state lawmakers. If voters had a say before an enterprise was established, it could give voters more say in how much state government grows.

A YES vote creates a paid family and medical leave insurance program, funded by employees and employers paying a premium.

A NO vote means no paid family and medical leave program will be implemented.

Democrats in the state legislature tried and failed to do this during the legislative session. This insurance program would provide up to 12 weeks of paid family and medical leave starting in 2024.

Employees and employers would split the premium 50/50 starting in 2023, to fund the program one year ahead of it being implemented.

A YES vote increases taxes on cigarettes and tobacco products, and creates a nicotine tax that would include vaping products.

A NO vote means cigarette and tobacco taxes would remain the same, and no new tax on nicotine and vaping would be created.

What's with Amendments vs. Propositions and Numbers vs. Letters?

These are the ABCs and 123s of a Colorado ballot.

RELATED: The ABCs and 123s of Colorado ballots

Consider amendments more set in stone and difficult to change. Constitutional amendments now require 55% of the vote to pass, a change voters approved in 2016 when they approved Amendment 71.

Propositions are changes to state statutes that can be modified by state lawmakers. Propositions need 50% plus one vote to pass.

The number or letter of the ballot issue tells you if it made the ballot because citizens got it qualified for the ballot, or if state lawmakers referred it to voters.

Numbers mean voters collect enough signatures to get the issue on the ballot.