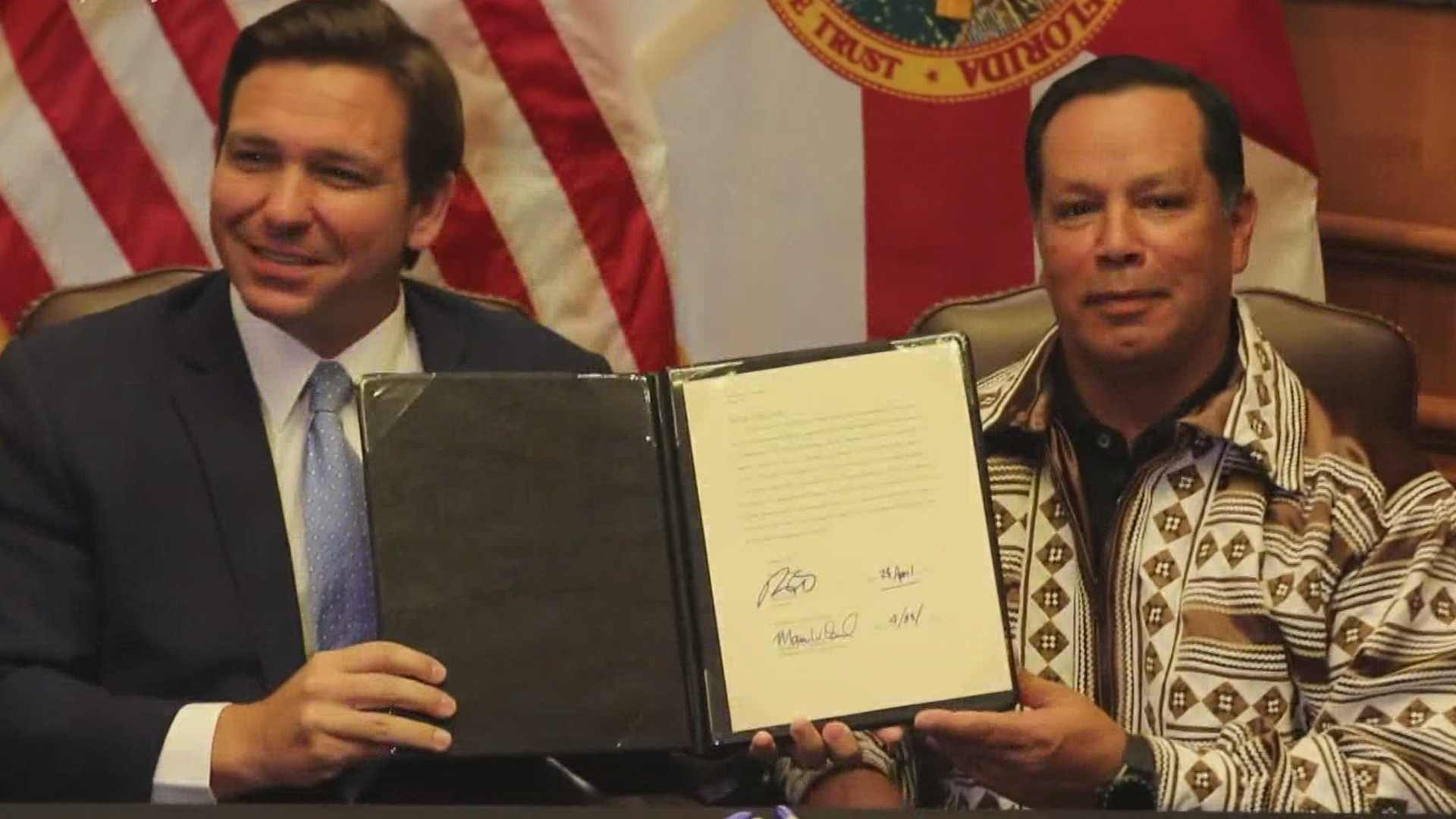 TALLAHASSEE, Fla. — The Florida Legislature will convene for a special session to consider a new sports betting deal reached between Gov. Ron DeSantis and the Seminole Tribe of Florida.

Following months of negotiations, Florida Senate President Wilton Simpson says the governor and the Tribe have agreed to a new 30-year gaming compact.

If approved by state lawmakers, the agreement would create a $2.5 billion revenue-sharing guarantee over the next five years. Simpson's office says it would generate $6 billion in new revenues for the state through 2030.

"By comprehensively addressing issues raised for almost a decade, the 2021 Compact will maximize revenues for the state and provide new opportunities for both the Tribe and Florida’s pari-mutuel businesses by updating Florida law to better reflect the current gaming climate," Simpson's office wrote in a memorandum sent to all senators.

As Florida Politics previously reported, the proposal would let such facilities keep offering designated player games, and the Seminole Hard Rock Hotel & Casino would have exclusive rights to offer craps and roulette at its seven casinos.

With just a week left in the regular legislative session, state lawmakers are running short on time to consider the compact. As a result, House Speaker Chris Sprowls and Simpson have agreed to convene the special session the week of May 17.

"While the previously announced legislation to establish a Gaming Control Commission and to decouple greyhound, jai alai, harness, and quarter horse racing has seen tremendous support in the Senate thus far, my intention is to reintroduce these bills during the Special Session, so that we can discuss and address the future of gaming in our state in a more comprehensive manner at that time," Simpson wrote Friday.

The updated deal could theoretically let Florida leaders circumvent a 2018 constitutional amendment that gave voters power to approve gaming expansions in the state, according to Florida Politics. By giving control to the sovereign tribal nation, Florida may be able to skirt that roadblock.

Opponents of the compact are using that argument to say the deal made was unconstitutional. The group, "No Casinos", is challenging the compact, saying it authorizes sports betting on non-tribal locations.

"Any expansion of gambling in Florida, if it was casino-style gambling, would require voter approval. And, so, this compact does a number of things that are not on tribal lands. In fact, this agreement paves the way for full-scale, electronic betting of all sorts on phones and electronic devices and mobile devices throughout Florida, not just on tribal lands. It violates amendment three, and more importantly, is an affront to the will of the people of Florida who said they want a voice on these matters not to have these matters worked out and behind closed doors in Tallahassee," John Sowinski, the President of No Casinos said.

Despite the opposition, the Senate President is pushing for the legislature to approve the compact. If the deal is passed by the legislature, it will need federal approval and could go into effect as early as this Fall. The compact would end in July 2051.

"Gaming, in one form or another, is a voter-approved legacy industry in our state that has contributed billions of dollars to our economy for education, health care and infrastructure, while providing hundreds of thousands of jobs to Floridians over the course of nearly 100 years. In my view, we have a responsibility to update our laws to reflect current realities of this heavily-regulated industry and to ensure those laws are properly enforced," Simpson added.

I’m excited to announce the signing of a new compact between the State of Florida and the Seminole Tribe of Florida, which will generate the state $2.5 billion in new revenue over the next five years and $6 billion through 2030. https://t.co/6za6I0TmFz pic.twitter.com/uLV1YmsRkl