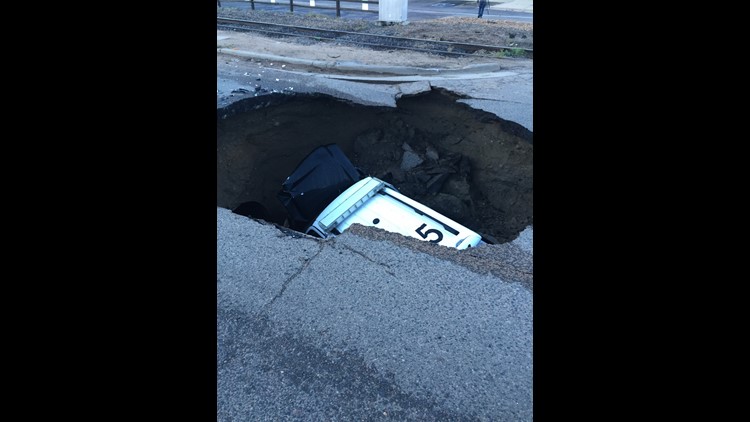 Photo by: Mark Campbell, Sheridan Police Department
West Oxford Avenue is closed from South Santa Fe Drive to Clay Street due to a massive sinkhole that has opened up in the intersection of River Point Parkway.

Sinkhole swallows SUV with officer inside

DENVER - Sheridan's city manager says the sinkhole that swallowed up a police SUV early Friday morning was caused by a pipe that burst underground.

Last night's storms overwhelmed the storm drain pipe and water started spewing under the surface, according to Devin Granbery.

"With last night's major storms, what we think happened is that it gave way at a connection between two different sized pipes," Granbery said.

The water saturated the ground which created a void that allowed the pavement to cave in, according to Granbery. The city manager said crews checked the piping both up and down stream to make sure this kind of collapse doesn't happen elsewhere.

Granbery added that he doesn't believe other drivers are at risk and that this was likely a one time incident.

The incident happened at around 2:15 a.m. Friday when Sheridan police sergeant Greg Miller was on patrol, traveling eastbound on West Oxford Avenue near Natches Court.

When the Miller entered the intersection, the road gave way.

"The next thing I know... dirt. I'm assuming dust from the airbag was floating around and everything," Miller said. "I hear the rushing water, and all I see is a dirt wall in front of me."

The car ended up 10 to 15 feet below the road surface. Miller had to crawl out onto the roof and crawl out of the sinkhole.

Miller was taken to Swedish Medical Center to be checked out but was released. The police car is a total loss.

West Oxford Avenue is closed from Santa Fe Drive to South Clay Street. There is no estimated time of reopening.