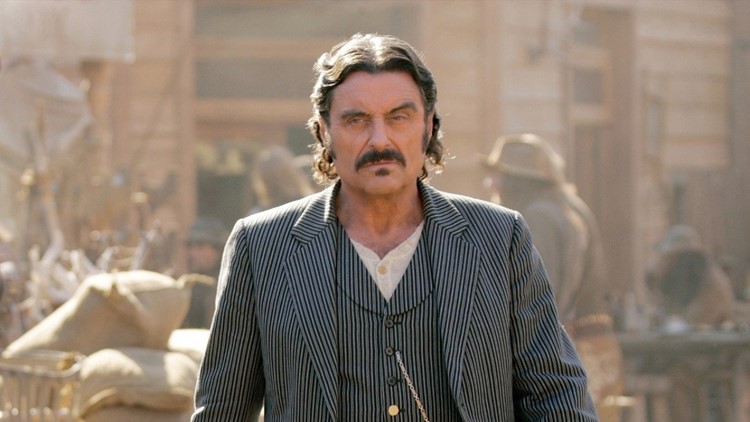 Photo by: Courtesy HBO
The character Al Swearengen in "Deadwood" is very different from the one in real life.

The real Al Swearengen died near Alameda and Santa Fe. Was his death an accident or murder?

DENVER — The name in the headline might not mean much to you if you haven’t seen HBO’s “Deadwood,” but if you have, it might pique your attention.

In the HBO series and 2019’s “Deadwood: The Movie,” Al Swearengen is the owner of the Gem Saloon, a dancehall and brothel.

The real Swearengen died under what some would say are murky circumstances in Denver. 9NEWS’ Kyle Clark got help from the Denver Public Library to learn more about the actual man who inspired the fictional character.

Swearengen’s death happened the evening of Nov. 15, 1904, near the Denver & Rio Grande railroad tracks where they cross Alameda Avenue (that’s where Santa Fe Drive is now). This site is about a mile away from the 9NEWS newsroom.

The real-life Swearengen was not a good man. He was incredibly violent with women, including his three wives, according to newspaper articles compiled by Denver Library librarian Alex Hernandez.

When Swearengen was found dead, researchers believed he had been hit by a train. But some claim this wasn’t the case, and that his body was found by a streetcar line – lending credence to the theory he had been murdered. Proponents of this theory believe he had been killed by a blow to the head.

In the coroner’s report, Swearengen’s name is listed as “Albert Ellis.” Ellis was his given first name, and it’s possible he was going by an assumed name after his twin brother was attacked in Iowa.

It’s possible Swearengen was going under a different name in fear of retribution for his dirty deeds.

According to the coroner’s report, a passerby found Swearengen. No one saw him die, but his injuries were more extensive than a blow to the head. Instead, his skull was fractured, his ribs on the right side were broken, and both his legs were badly crushed.

The coroner said Swearengen was a miner and supposed to be going up to the mountains. According to his report, he had nothing of value on him other than a “cheap watch,” knife, and dynamite fuse and cap for his mining work.

The 59-year-old’s body was returned to his family for burial.