VERIFY: Yes, sunscreen chemicals can absorb into your skin. But don't stop using it.

As we get ready for summer, the VERIFY team is looking into a question about sunscreen safety. 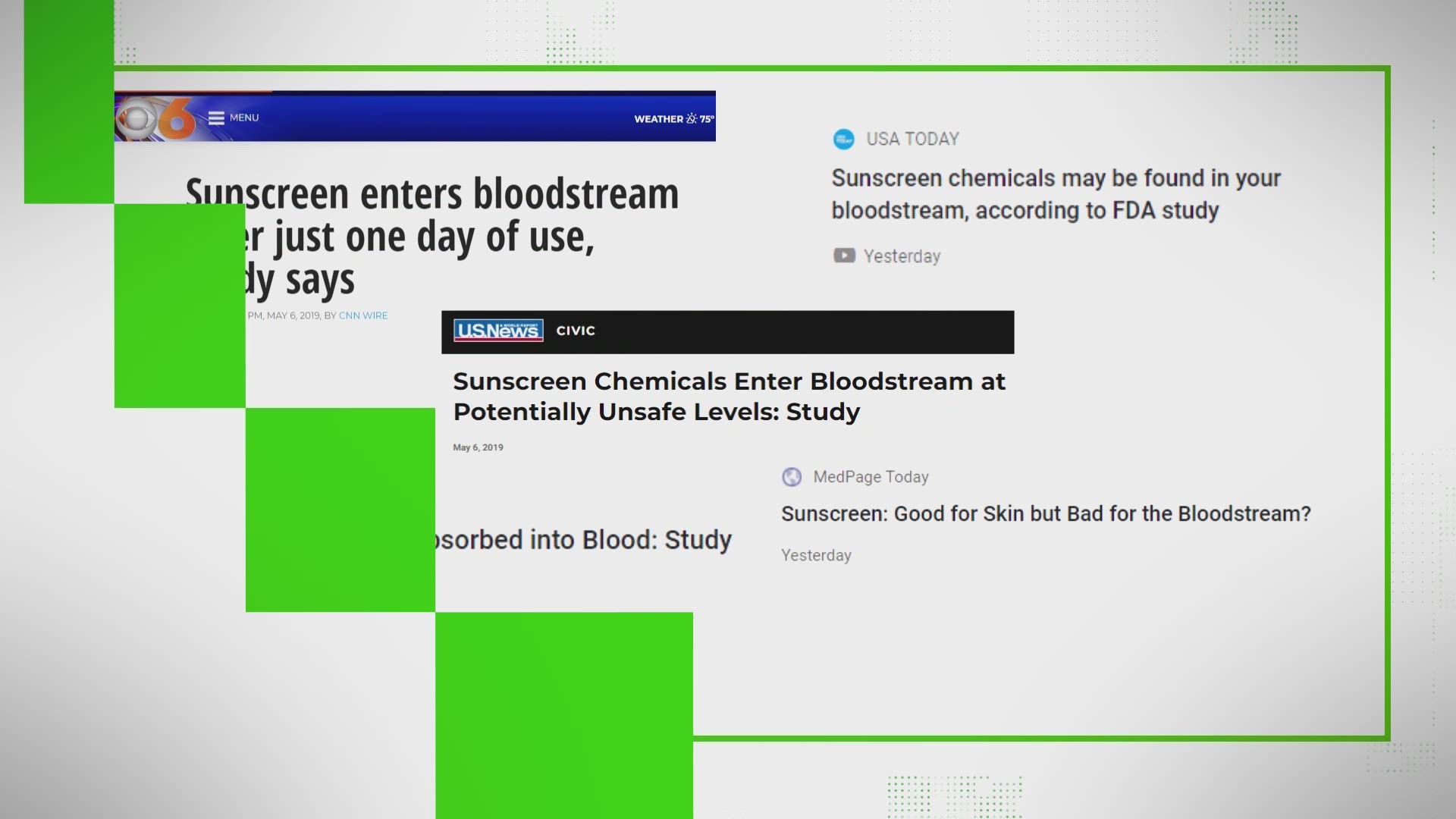 As we get ready for summer, there are claims that chemicals in sunscreen can be absorbed through your skin and into your bloodstream. But is that true?

Did a recent study actually find that chemicals in sunscreen can enter the bloodstream? What does that mean for consumers?

A study published in the Journal of the American Medical Association did find four common chemicals from sunscreen in the blood samples of their participants.

It’s important to note that the study was carried out by an arm of the U.S. Food and Drug Administration as part of ongoing tests to ensure that sunscreens are safe for consumers.

The FDA said that there’s currently no evidence these chemicals are dangerous or could cause health risks. While they said they’re committed to more testing to sort out all the details, they urge consumers to continue using sunscreen to prevent unhealthy UV rays.

The study is titled: “Effect of Sunscreen Application Under Maximal Use Conditions on Plasma Concentration of Sunscreen Active Ingredients.”

Researchers had 24 participants put on the max recommended dose of sunscreen, which comes down to applying it about four times per day.

The test was looking to see if four of the active ingredients, avobenzone, oxybenzone, octocrylene and ecamsule would be found in the participants' bloodstream.

According to the study, the FDA “provided guidance that sunscreen active ingredients with systemic absorption greater than 0.5 ng/mL or with safety concerns should undergo nonclinical toxicology assessment including systemic carcinogenicity and additional developmental and reproductive studies.”

Put simply, the FDA regulates sunscreen and its testing. To keep up with modern standards they wanted to test the absorption of these four ingredients. If the absorption rates were lower than that threshold, there would be no need for further testing. But, the FDA advised that if those four ingredients were found in concentrations higher than 0.5 ng/mL they’d have evidence to warrant further testing on the potential for unhealthy effects from their absorption.

The study found that all four were present in the blood at concentrations higher than 0.5ng/mL.

We can VERIFY, a study by the FDA did find chemicals in sunscreen can be absorbed into the bloodstream.

In a statement, the FDA said this test proved that sunscreen can be absorbed by the skin and that the need for additional testing is warranted. But they stressed that “the fact an ingredient is absorbed through the skin and into the body does not mean the ingredient is unsafe.”

The study came to a similar conclusion and said the results show “the need for further studies to determine the clinical significance of these findings.”

But it also added that “these results do not indicate that individuals should refrain from the use of sunscreen.”

In the meantime, the FDA said they’re positive that UV rays from the sun can cause lasting damage and cancer.

So while they continue testing sunscreen for potential harm, they say keep using it to prevent definite harm from too much sun.