CU professor: Bright light in the sky was from SpaceX rocket

NORAD isn't sure what it is, but they know that it is not a threat to the U.S. 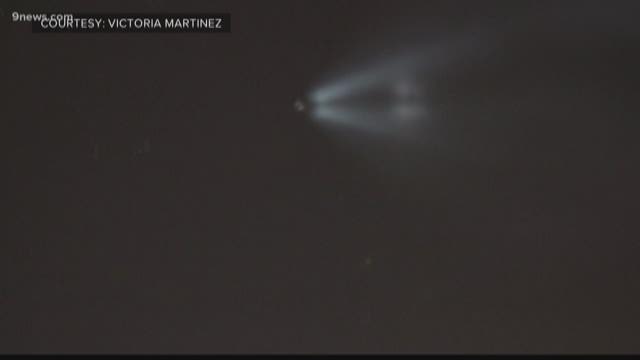 Viewers saw it over Evergreen and Denver - and likely other places too, as reports of a bright light in the sky have surfaced from Arizona to California Tuesday evening.

9NEWS viewers have asked about what exactly it might have been. From the pictures, it was a dot of brighter light followed by a tail of triangular, softer light. It happened around 7:30 p.m.

NORAD says they don't know what it was, they just know it's not a threat to the U.S. They told 9NEWS that's the only thing they monitor.

No space debris was scheduled to return to the Earth on Tuesday, according to aerospace.org.

Quite a few people had suggested it has something to do with Elon Musk's Falcon Heavy launch earlier in the day on Tuesday - and a professor at University of Colorado Boulder was able to confirm the connection on Wednesday morning.

Phil Larson, Assistant Dean of the school's College of Engineering and Applied Science, says people across the western United States were seeing the rocket's engine relight more than six hours after the initial launch to make sure it was still on the right trajectory toward Mars.

“Part of the fun goal was to show that this new rocket could throw things all the way to Mars, and then to do that it needed to coast and then relight the second stage engine," Larson said.

So there you have it, folks. No aliens - just a rocket relighting on its way to Mars.