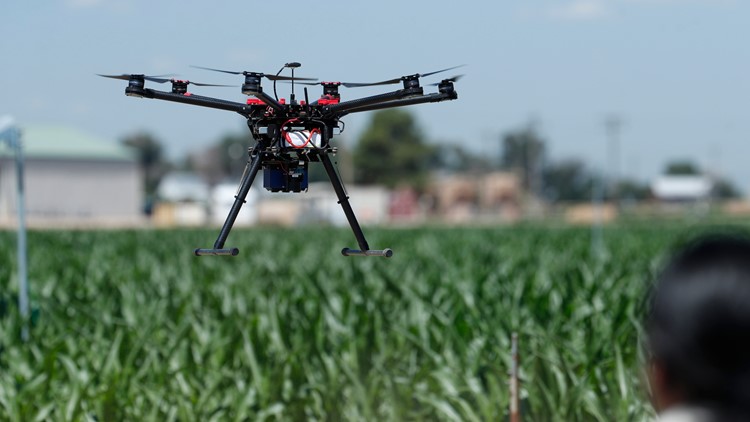 Photo by: AP
In this Thursday, July 11, 2019, photograph, United States Department of Agriculture engineering technician Kevin Yemoto guides a drone into the air at a research farm northeast of Greeley, Colo. Researchers are using drones carrying imaging cameras over the fields in conjunction with stationary sensors connected to the internet to chart the growth of crops in an effort to integrate new technology into the age-old skill of farming. (AP Photo/David Zalubowski)

PHILLIPS COUNTY, Colorado — More than a dozen drones have been spotted flying over two eastern Colorado counties during the overnight hours, and their appearance is a mystery, according to a Facebook post from the Phillips County Sheriff's Office.

Deputies have been investigating multiple reports of drone sightings in the county over the last week, according to the Dec. 20 post.

On that day, according to the post, deputies with PCSO and the Yuma County Sheriff's Office tracked the drones.

They tracked more than 16 drones between the two counties, and according to the post, don't believe anything malicious is going on. PCSO said the drones have been flying at higher altitudes and are following up on leads and reaching out to state and federal agencies to pinpoint the exact nature of their activities.

RELATED: Colorado farmers use tech to squeeze every drop from Colorado River

The post also asked members of the public to call communication centers if one of the drones flies onto their property or appears to be looking into windows. A deputy will be sent to investigate, although PCSO said only there's been just one report of a drone getting close enough to look through a window.

Anyone who believes they've located one of the drones should also contact the sheriff's office so they can conduct a forensic evaluation to identify the owners and take the appropriate actions.