The Centennial Tigers are only the second all-women's team in the country. They're built on tenacity, integrity, grit, empowerment, respect, and sportsmanship. 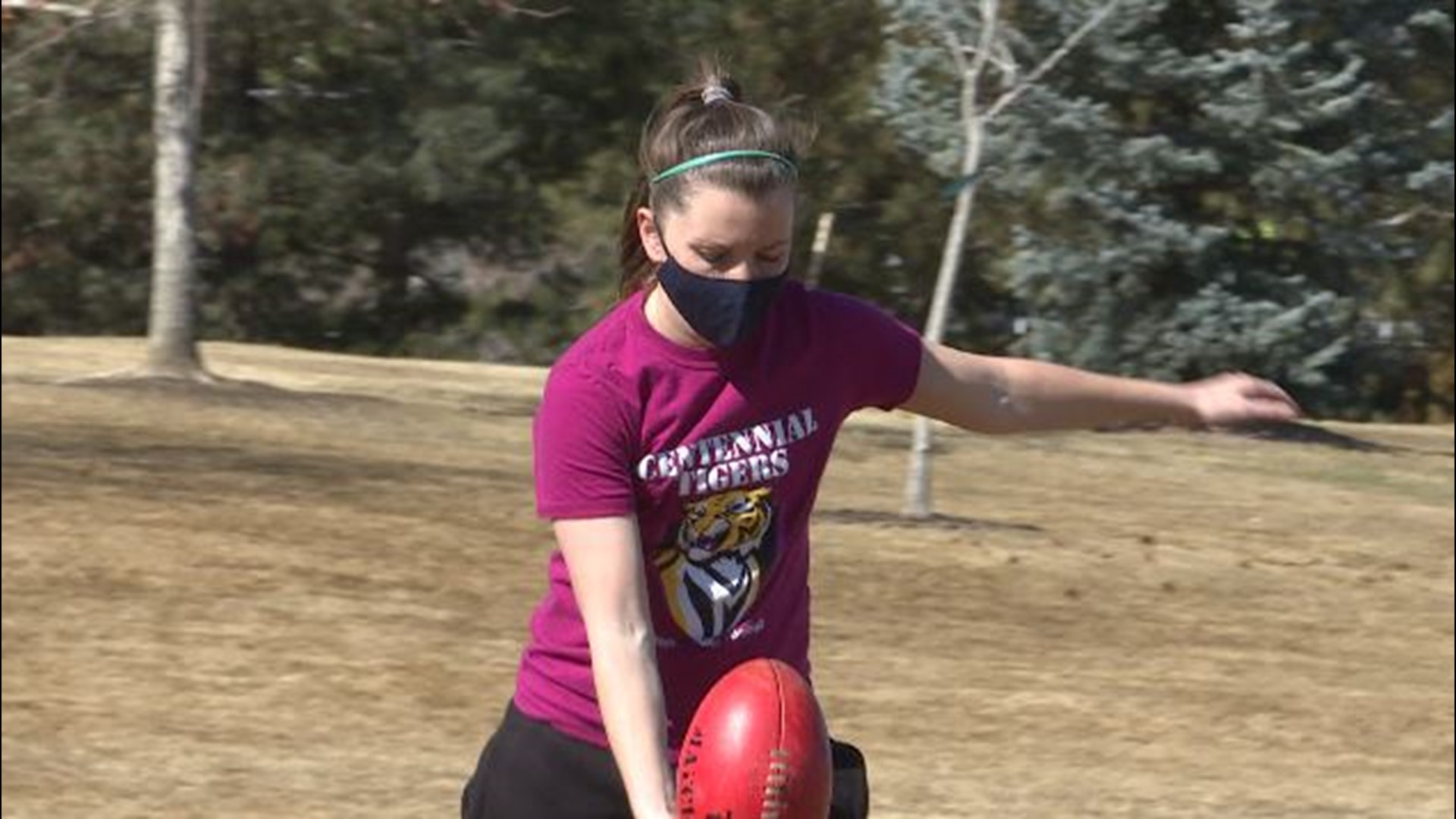 LONE TREE, Colo. — South of the Denver Metro area, lives only the second women's-only Australian Rules Football team in the entire country. While their sport may be foreign, their principles are universal.

"The Centennial Tigers were founded on a set of core values: tenacity, integrity, grit, empowerment, respect and sportsmanship," team president Sara Edwards Rohner said. "And really, even though we really love to win, the sport is really about, or the team is really about empowering women and teaching them to find their inner-strength."

Edwards Rohner is a former amateur and pro rugby player for 15 years, including stints on two international teams. She then competed internationally in Australian Football and was a selection to the AFL International Cup, before returning to the states to start her own club.

Not everyone is a former professional athlete. The Tigers accept women at any place in life's journey.

"I wish I had started this so much earlier in life. I had no idea how many benefits would come out of it," Jennifer Elliott said. "We welcome all people, not only your background, but your sports level or ability or your exposure to this. I've never played a sport before and they welcome me with open arms."

Chris Briggs is the only Australian-native on the Tigers. Born in Melbourne, Australia (the homeplace of Footy), she's been an amateur player for seven years.

"It doesn't matter what level of physical fitness you have, what size or shape you are, you're welcome," she said. "Just come along and have some fun."

Everyone, regardless of sexual orientation, racial identity, or even gender identity, is welcome on the Tigers.

"I'm a mother of four kids, and actually I have a transgender son and I have a gay daughter, so inclusion is very important to me," Elliott said.

She's not the only mother on the team -- not even close. There's a whole group of women who are certainly not finished with their athletic careers, just because they've grown their families.

"I didn't want them to think it was over just because you have a child," Edwards Rohner said, who has one son.

Briggs has grown children who have already left the nest, but she still wants to shed certain stereotypes.

"Sometimes it's one of those labels where it's like, 'I'm more than just a mother!' I'm an employee, I'm creative, I'm talented, and I'm social!" she said.

Amanda Newell is one of the founding members of the Tigers, and is also Sara's sister. Newell has two children and is also a public school teacher.

"It gives me a chance to do something I love and show my kids that as adults, you can have hobbies and do something that is just for yourself," she said.

Carly Austin, a former collegiate rower, was desperate to find something competitive in her adulthood to compare to her former life.

"It is my outlet, my escape, my safe space, to get out and be stronger for myself and my family," she said.

The Tigers are members of the United States Aussie Football League (USAFL) and are competing in their third season. Aussie Football, or Footy, is a sport comprised of many different traditional sports. The object of the game is to score goals (similar to rugby or soccer) by way of kicking, bouncing (dribbling like basketball), and handballing.

But the rules to the Centennial Tigers? Just show up.

"One rule that the Centennial Tigers have is never be afraid to try something new."

"Have something for yourself."

"Just come out and have a good time."

"To have time to make friends."

"Just get out there and do it."

The Tigers practice Tuesdays and Saturdays in Lone Tree, CO. They are actively recruiting athletes with any experience levels.

RELATED: Mines' Brittany Simpson is already the winningest coach in team history, but that's not enough