'I hope I can be here again': CU super fan Peggy Coppom says she'll keep coming to games after death of twin sister

Peggy Coppom believes in staying positive and loving life even after the death of her twin sister and fellow CU superfan Betty Hoover. 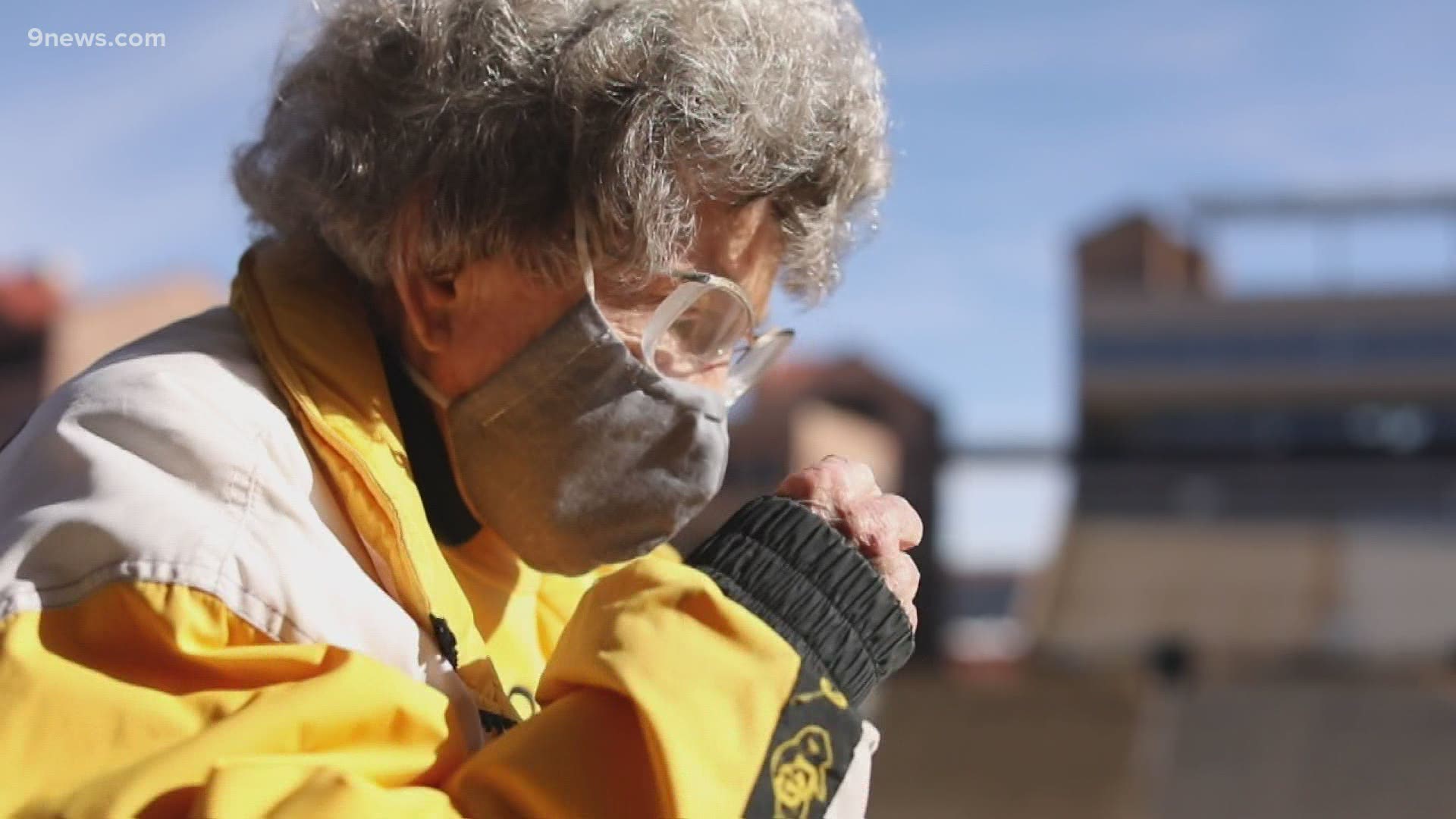 BOULDER, Colo. — When crowds can once again gather at Folsom Field to cheer on the University of Colorado Buffaloes, 96-year-old Peggy Coppom will be there, just like she’s been there since the 1940s.

But there will be something missing: her twin sister Betty, who has been by her side cheering on the Buffs rain or shine, win or lose, the entire time.

“I am very grateful for the days I have, and I hope I can be here again,” Coppom said from the seat at Folsom Field that’s been hers for decades. “I was asked if I would come without Betty, and I said ‘absolutely.’

Betty Hoover died in August after a battle with pancreatic cancer and spent her final moments with her sister.

RELATED: CU superfan, one of two famous twins, dies at 95

Hoover and Coppom were both CU superfans who were mainstays at football and basketball games for decades, often stealing the show with their matching pom-poms and outfits -- and unmatched enthusiasm for the team.

“Maybe two weeks before [Betty died], I was with her and she turned to me and said ‘we’ve had a lot of fun, haven’t we?’” Coppom said. “Just out of the clear blue, and I said ‘that’s right.’

“And I’m grateful for that, and the good family that we’ve had, and I’m happy for that. And I can carry that on with me.”

The sisters hadn’t attended a CU game together in person since February 2020, right before the COVID-19 pandemic put live sporting events on hold … and forced everyone to spend their time at home, away from the crowds and community and energy that the two sisters loved.

> Watch the video below for Kim Christiansen's extended interview with Peggy. 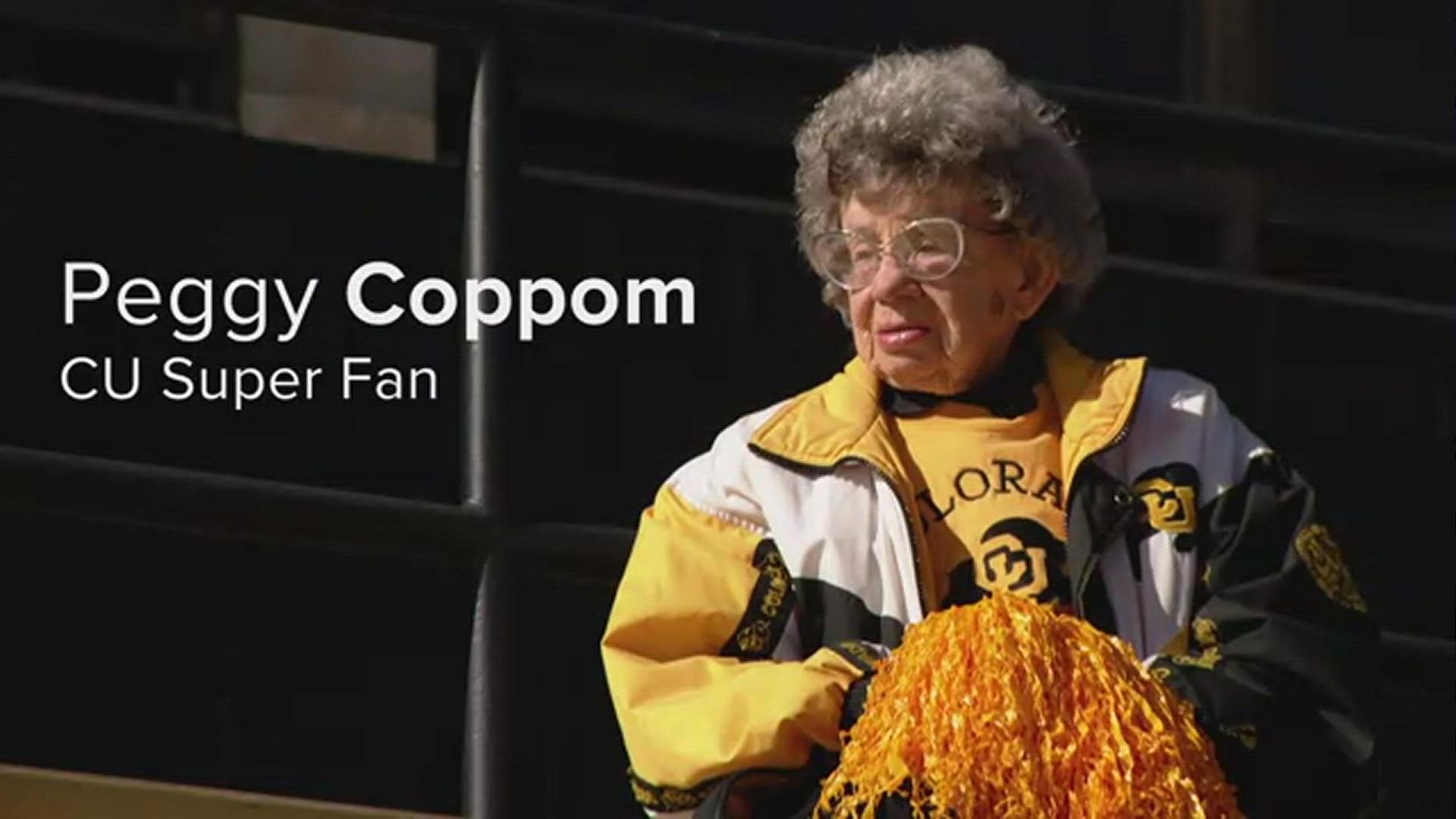 “I just was grateful to have the television, you’ve got to think positive, I know,” said Coppom, who was alive when radio was the only way to experience the games. “It was not fun, of course, to be by yourself and watching the game. My dog listened to me yell and holler.”

“She’s gotten so she knows what to do with basketball here. I’m screaming at the TV.”

The twins were born in Walsenburg, and then lived in the Eastern Plains town of Haxtun until 1939, when their family moved to Longmont, where they met their husbands at Longmont High School.

Their husbands were best friends and served as fighter pilots in World War II. Coppom said she and her sister used to always insist on dressing alike, but that changed as they grew up (“You don’t dress alike when you’re changing diapers and raising children,” she joked).

The two sisters went to Boulder High School during their junior and senior years, where they were cheerleaders for that team … as well as superfans for the Buffaloes.

Even as teenagers and children, Coppom said the two twin sisters had a relationship different from the one other siblings might have.

“We would never, ever hurt each other,” Coppom said. “Every picture we had where we were toddlers and little kids, we have our arms around each other.”

Credit: Courtesy Peggy Coppom
A photo of "CU twins" Peggy and Betty as children. Even when they were young, the two sisters never fought and always had their arms around one another.

During their decades of CU fandom, the twins became close to the players and coaches. Even during the worst losses, Coppom said they would never leave early, and never lose faith in the Buffaloes.

Coppom said former CU star Jeremy Bloom visited her after her sister died, and the CU football team recently gifted her with a game ball for Betty, who is remembered most of all for her positive spirit and energy.

Coppom said her sister wasn’t someone who dwelled on the negative, and neither does she.

“You know, the older you get, the faster time moves along, even with this pandemic. Of course, I move slower, that’s why time moves faster,” Coppom joked.

She said she’s had her share of tears over the past few months, but that hasn’t stopped her from enjoying the positive things in her life, and looking forward to another CU season surrounded with the family and friends who love her.

“I’m not left here to sit around and be doom and gloom and everything,” Coppom said. “I have to be happy and cheerful and make the best of life that we can.