Sarah Thomas swam more than 80 miles and spent around 54 hours in the chilly water that is about 64 degrees. 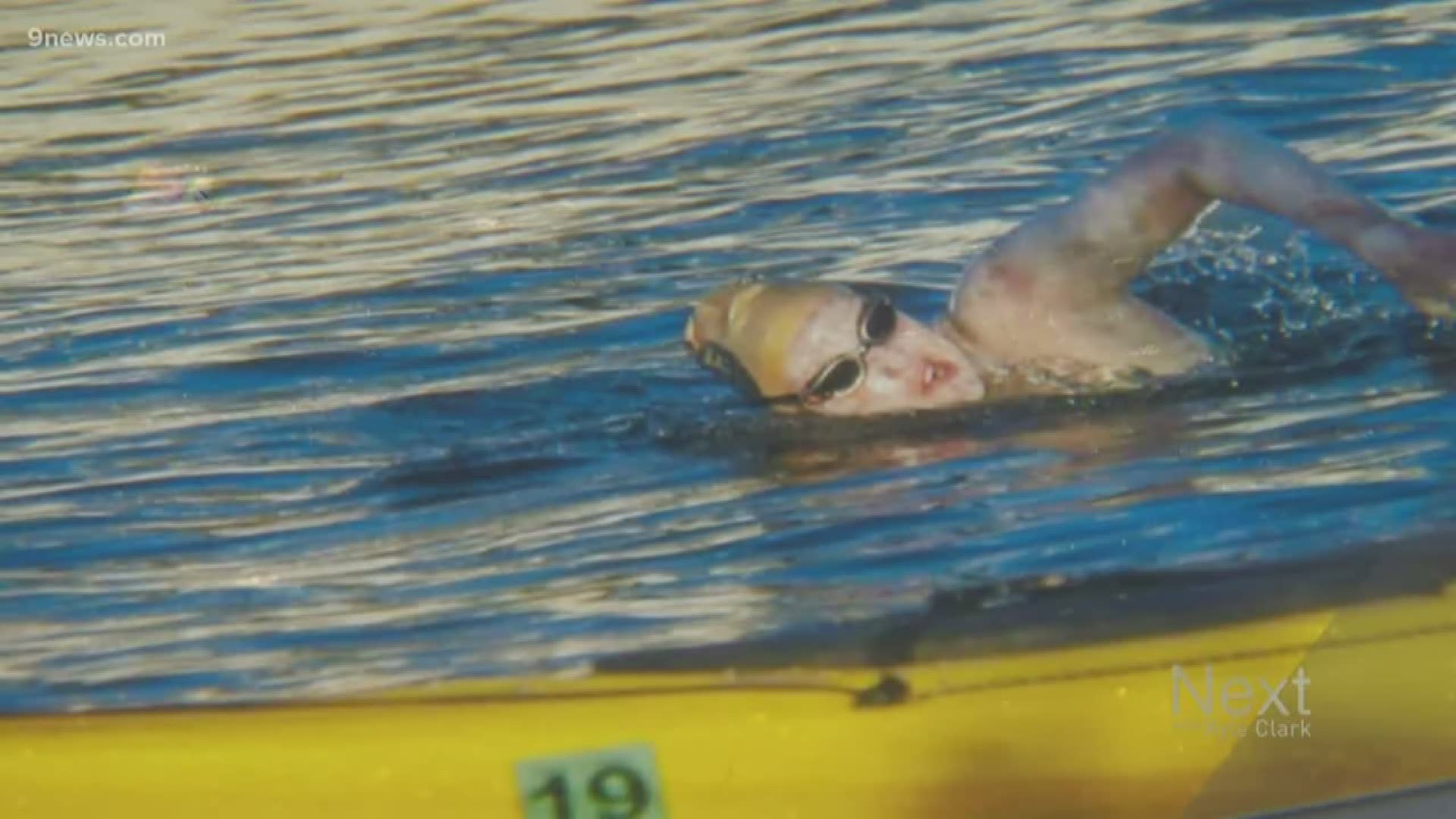 A cancer survivor from Conifer, Colorado, has become the first person to swim the English Channel four times without taking a break.

"I'm really just pretty numb. There was a lot of people on the beach to meet me and wish me well and it was really nice of them, but I feel just mostly stunned," she reportedly said.

Thomas doesn't shy away from challenges.

"I like excitement and adventure in my life," she told 9NEWS after her return to Colorado. "Whatever way you want to throw it at me, whether it’s in the water, or hiking 14ers, or camping in crazy conditions."

For her, crossing the English Channel that many times without stopping - a feat no one has accomplished before - seemed like the next best test of her endurance.

"It was something that had been growing in the back of my mind for a few years," she said. "I’ve done some longer swims in the past and it was kind of next on the list of a challenge that I thought would be hard and fun to do at the same time."

The rules were strict. She wasn't allowed to touch a support boat or any of its crew. There was no sleeping and she even had to eat in the water. The menu was limited: mostly carbohydrate drinks, some apple juice, banana baby food and M&Ms, all tossed to her from the boat by a team including family and support swimmers.

"Through the hard times, my crew definitely pulled me through," she said. "They were really supportive on the boat, I had some good friends in pace swimming with me and they were just encouraging the whole way."

Thomas started her journey in Dover, England, and she would finish her swim in England, as well.

The weather was reasonably decent for the first 75% percent of the swim. The water was choppy and winds were stronger in the last leg, but the conditions in her final stretch weren't the worst part.

It wasn't the jellyfish sting to the face she suffered, either.

On top of the mental, emotional and physical fatigue, Thomas described intense nausea she suffered in the water in a Facebook post reflecting on her journey.

"...And kept puking. A few moments later, mid puke, we were told told me my 10 minutes were up and we needed to start swimming again. So I somehow started swimming again, toward who knows what. At my next 30 minute feed stop, they tossed me my feed and I immediately puked again. And again at the next stop. My memory is fuzzy about the timing during all of this, but it seemed like hours of taking a feed and puking. Taking a feed and saying I couldn’t do it anymore. I know at one point Karl was in the water to pace swim with me, so probably around 3 am. I was puking and dry heaving. I have no idea what I said to him to complain, but he just calmly and rationally told me to keep swimming. As I was whining, a voice from the boat told me to get moving. So I did."

Thomas took medication to settle her stomach and continue on the path. It was a medication she still had from her cancer treatments.

If it's not clear already, Thomas is pretty tough. She was diagnosed with breast cancer two years ago.

“I just randomly felt a lump in my breast ... ” Thomas said in an interview with 9NEWS in 2018. “I still had one swim left in the season and I didn’t want to admit to myself that I thought something was wrong.”

RELATED: 'It's just a sense of adventure': This Colorado athlete loves the water

In November 2017, doctors confirmed her suspicions. She had breast cancer. At the time, she was 35 years old, and at the top of her swimming game.

“I was feeling strong, I hadn’t had any injuries and I just really felt like I was prepared to take on the world,” Thomas said. “When you get a diagnosis of cancer you have to reevaluate everything you’ve ever wanted to do.”

Through surgery, chemo and radiation, she kept her goal of swimming the channel as her motivation.

Thomas told 9NEWS that it was her team of loved ones and supporters that motivated her to finish her English Channel swim.

"People that supported me during my swim are the same people that were supporting me during cancer, and I'm really lucky to have such good people in my life," she said.

Thomas started swimming when she was a young child, participating in the sport in high school and college. It wasn't until 12 years ago that she got interested in open water swimming. She calls her first 10k race in Horsetooth Reservoir a “gateway drug.” Since then she has set a record in Lake Powell, crossed the English Channel, swam in Loch Ness and around Manhattan, to name a few of her epic swims.

RELATED: Colorado woman swimming nonstop for 104 miles in attempt to break her own record

That 67-hour swim in Lake Champlain earned the ultra-marathon swimmer a world record for the longest solo, nonstop, unassisted, current-neutral swim. During that 104.6-mile swim, she ate and drank while treading water, taking small breaks, but mostly, she just swam.

Immediately after the swim, there was one goal: let her body recover.

Thomas said her tongue and mouth were quite sore from the saltwater, so she took down nothing but tea and ice cream for a couple of days.

But as far as longterm goals, Thomas doesn't have another swim in mind just yet. She hopes to take a break (and by break, she means climbing 14ers).

"I really don’t have an answer to [what's next]. You guys covered me when I did Lake Powell in 2016, and then when I did Lake Champlain the following year, and then I had cancer in 2018, and then this swim has consumed all of 2019, so that’s been four pretty hard, intense years. And so my husband has asked if we could take a step back to do more hiking and fishing and camping and just take a breather for a hot minute," she said.

And her advice for anyone who sees her story?

"I do really thinks it’s important for people who are in hard places in their life, whether its from cancer or anything else, I just really want people to know that you can still have a dream and you can still have hope, even if you have to push it back or defer it for a little while."

TEGNA staff contributed to this report.