As dine-in restrictions get tougher, so does the possibility of making tips for a lot of servers. That's why a few local leaders joined the tip a server challenge. 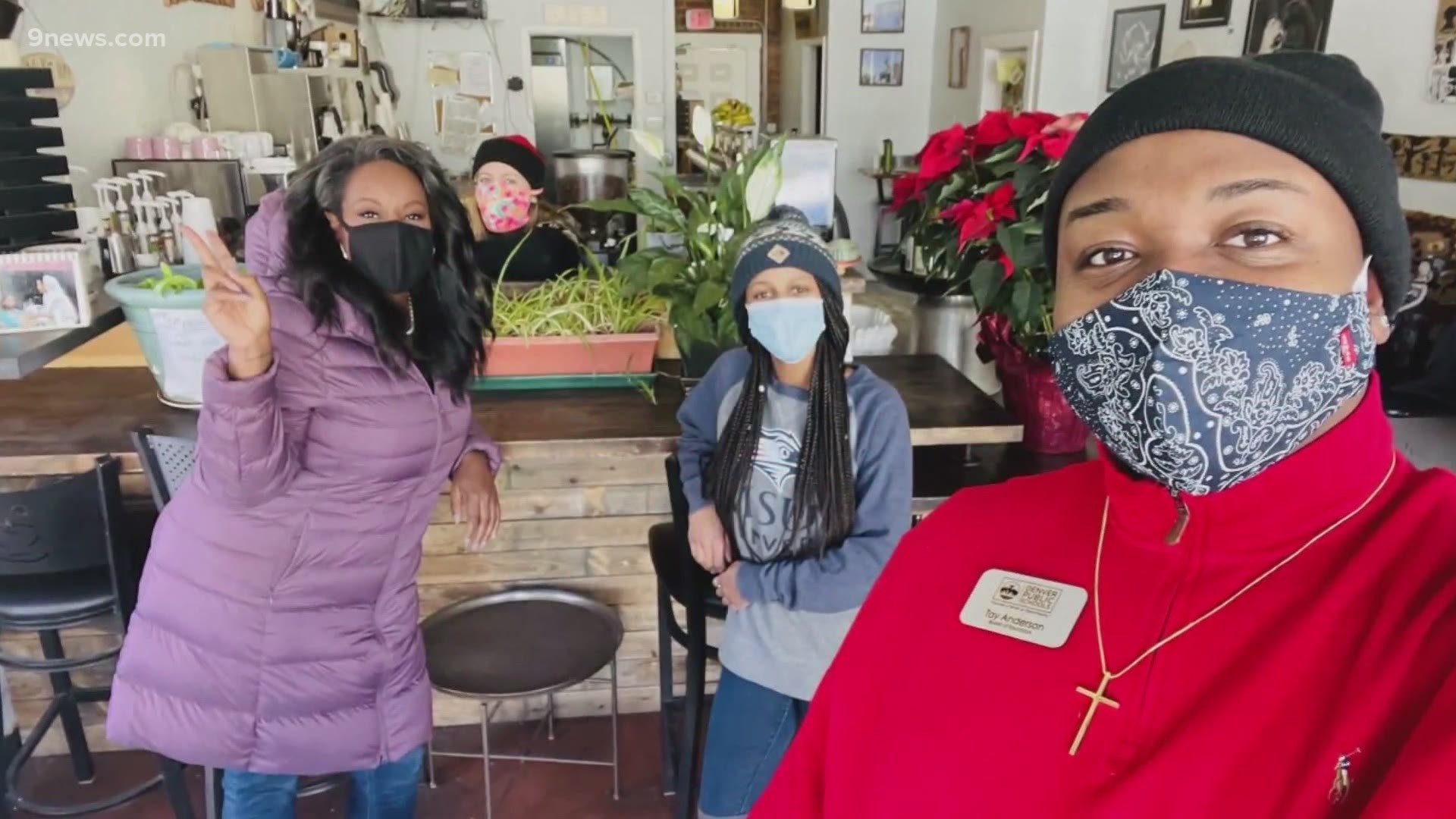 DENVER — For 40 weeks, baristas, waiters and servers have continued working through the pandemic in Colorado. Often with fewer, lower tips to show for it.

But thanks to a few local leaders and many contributions, several deserving servers will receive generous tips this week – a few already have.

"I'm still shaking," said one such server, Tyree Pruitt, Sunday morning. "You just really don't get this type of surprise ever."

Pruitt is the manager at Prodigy Coffeehouse in Denver. It's not often servers like Pruitt are surprised by a tip. Then again, lattes don't usually come with 5,000% gratuity.

"It's just a blessing to have those two beautiful people bless us like this," Pruitt said with $200 in hand.

Last week, Herod learned about a social media challenge called "tip a server." It's a challenge where anyone can collect tip money by posting their Venmo account name and asking for donations. Then those donations are used as a generous tip for restaurant workers.

"Our service industry has been hit so hard by this pandemic. A lot of folks are just doing whatever they can to make ends meet," Herod said. "They've been doing such a great job, so anything that we can do to boost their day or boost their spirits, I'm all in for."

Herod posted the challenge on her own social media platforms and invited Anderson and local artist DJ Cyn to join her in the challenge. They all shared their Venmo account names online and within hours, they said, friends and strangers began sending donations.

Hey friends! I’m participating in the Tip a Server Challenge! If you are able and so inclined please VENMO me @leslie-herod-1 . All funds received through Sunday will go to an unsuspecting server for the holidays! 💃🏾

"I am shocked at how much we've been able to raise!" Herod echoed.

Together, Herod and Anderson raised nearly $5,000 in four days for local servers.

Now these local leaders are on a "tip a server" tour, delivering every single dollar that's been donated to unsuspecting servers across the Denver metro area.

"Honestly, I was late on rent and I was really stressed out," said Sarafina Kidane, holding $250 with tears in her eyes. "I'm basically working 'till Christmas Day nonstop. My next off day is Christmas. It's going to be such a long week, but I was trying to stay calm and push through because I need the money."

"This is just so unexpected and incredible right now," she said, thanking Herod, Anderson and everyone who donated to make her tip possible.

Herod and Anderson will stop collecting donations on their Venmo accounts after Sunday, but they encourage everyone to join the challenge by donating through others or doing it themselves.

"You ask people to give just a little bit and it goes such a long way," Herod said Sunday after two stops, five servers and $1,100 in tips.

Herod and Anderson will continue tipping servers across town all week until every donation has been given away, they said.

"It may be Representative Herod and I out here delivering the cash," said Anderson, "but this is really Colorado and the people across the nation who gave to both of us and said, 'we want to see other people happy this holiday season.'"

State Rep. @leslieherod and I surprised FIVE folks doing the #TipAServerChallenge ... but we aren’t done yet!