Kelly Pickett is hopeful her experience at Magness Arena Saturday night will lead to a change at hockey arenas. 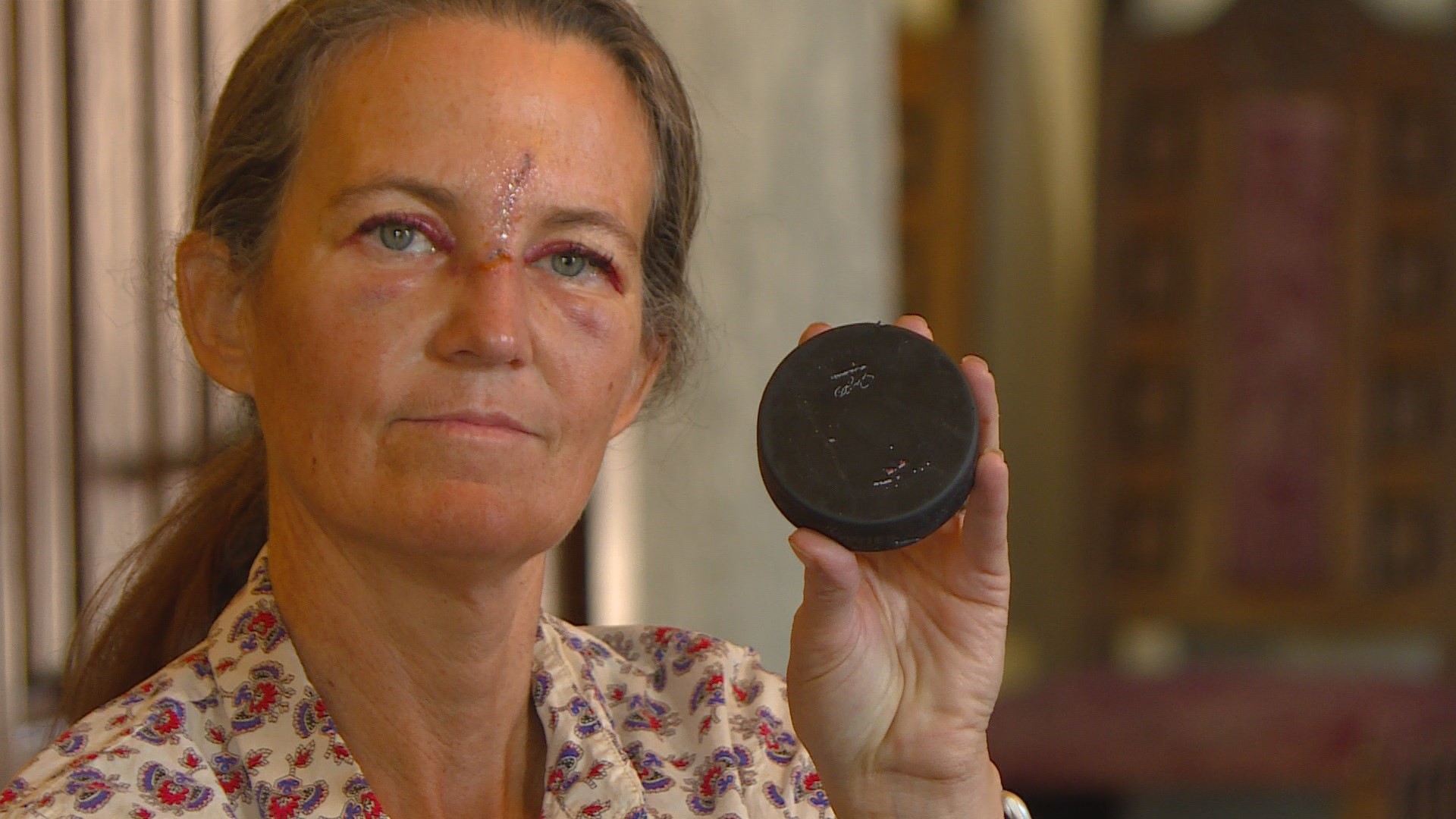 DENVER — Hockey fans like Kelly Pickett accumulate a lot of fan gear over the seasons, but there’s a souvenir Pickett said she would gladly give back to the University of Denver.

“This apparently is the puck that I got in the face,” Picket said, holding up the black puck. “What I felt was definitely a blow to the head.”

The story behind the 20 stitches above Pickett's nose began Saturday night at Magness Arena.

Pickett took her daughter Becca to watch the Denver Pioneers play against the North Dakota Fighting Hawks. It was an early 10th birthday present.

“She's their greatest fan, so that’s what we did for her birthday eve," Pickett said.

The mother and daughter had seats behind the glass near center ice. Toward the end of the game, Pickett said she experienced what felt like a baseball bat to the face.

“I never saw it coming, so I can’t say how it happened, but my daughter did see it and [the puck] actually hit her first,” Pickett said.

The puck glanced off Becca and struck Pickett square between the eyes.

“I have never been hit that hard by anything," Pickett said.

She held her face in her hands for a long time as fellow fans offered help.

“I eventually opened my eyes and there was a lot of blood,” she said.

Pickett admitted she lost track of time, but she noted that the stands were empty before she received medical attention. She said staff at the arena first suggested her husband pick her up and take her to the hospital.

A spokesperson for the University of Denver told 9NEWS the incident happened with about 10 seconds left in the game, and there shouldn't have been any delay getting Pickett medical attention.

Pickett was hit by the puck in a section of the arena that does not have protective netting. Pickett was hopeful her story would lead to a change.

“I’m really upset to learn that some of the seats are protected by nets, but ours weren’t," Pickett said. “I would like nets protecting all the seats, like immediately.”

Magness Arena has the same level of protection as Pepsi Center and other NHL arenas, a DU spokesperson said. There is currently no discussion about making changes or adding netting.

Kelly Pickett said she was grateful her daughter was not hurt and that her own injuries weren't more severe.

“[The] most important thing is that my daughter was standing and she actually had her 10th birthday. It was in the emergency room, but she had it,” Pickett said.