Lynnzee Brown is a national champion on the Denver Gymnastics team. While she celebrates the steps taken to make the sport more diverse, there's more work to do. 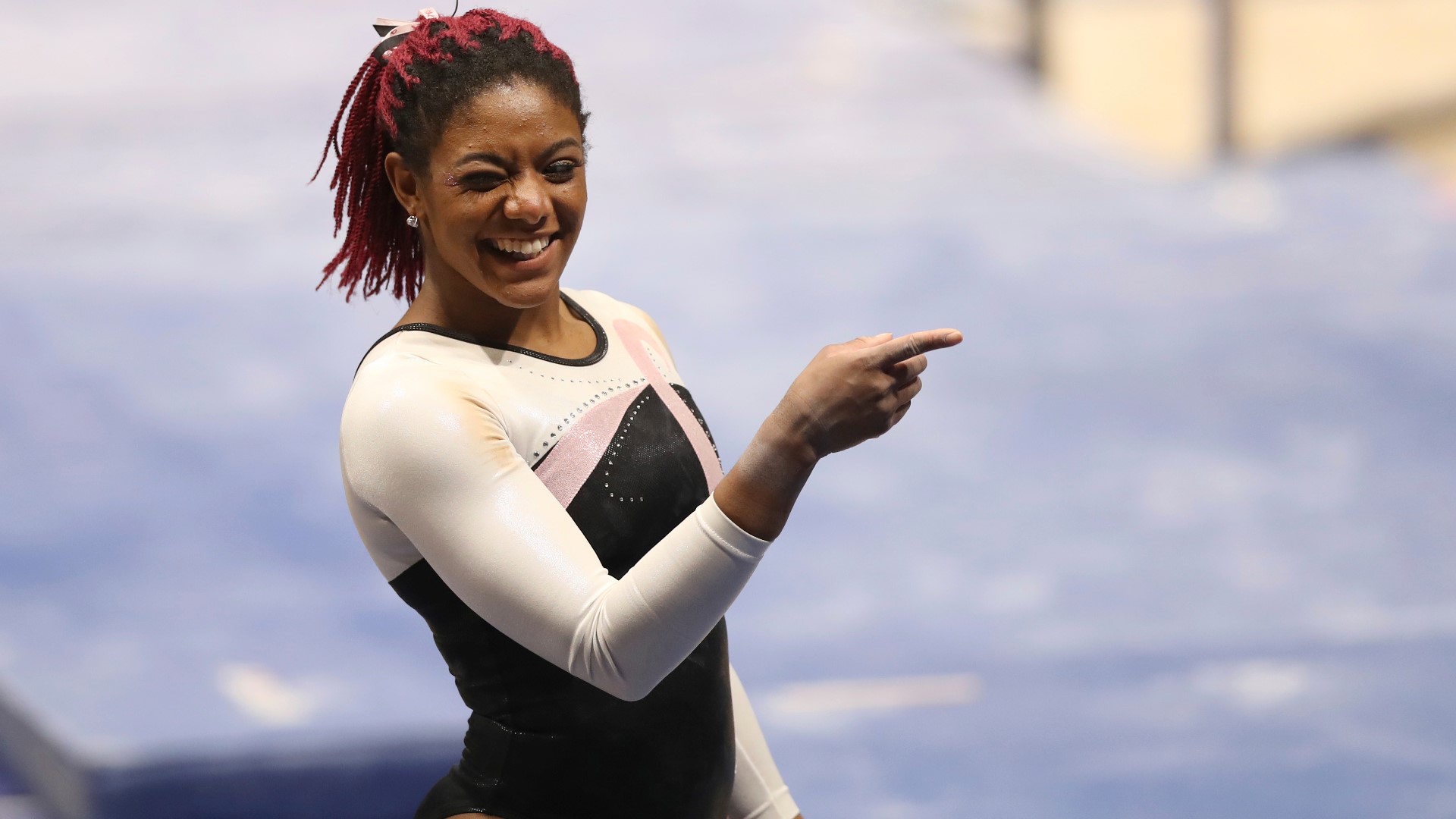 DENVER — It's not hard to notice that Lynnzee Brown is just built different.

The DU senior gymnast earned a national individual title in 2019 for her floor routine, and even battled back from an Achilles tear in less than a year.

But growing up in a predominantly white sport, different has also been skin-deep.

"[Growing up in Kansas City], my gym was very much no talk, all work, so I think that also played into the factor of not understanding that I was different," she told 9NEWS. "I just saw it as another challenge to overcome to prove that I'm just as qualified, I'm just as good, and talented as everyone else in this sport."

Brown, 22, grew up in the sport at the same time that Simone Biles (23) and Gabby Douglas (25) rose to fame in the US National Team ranks. Since the two were her contemporaries, Brown first looked to the earlier generation for inspiration.

"I really loved Dominique Dawes, I got to meet her when I was very young," she said.

Dawes was a 10-year member of the US National Team from 1990 until 2000, earning four medals. In the 1996 Olympic games in Atlanta, she also became the first African-American to win an individual event medal with her bronze on floor.

Douglas and Biles were the next in line, and Brown took notice.

"Even though Simone and Gabby were the same age, gymnastics is kind of a small community, so I knew of them when I was a little bit younger and I knew how talented they were," she said. "I felt a sense of connection even though I didn't know them, knowing how hard they had to work to be on these teams."

The sport is growing more diverse today, and even becoming a viral sensation at times. Performances such as UCLA's Nia Dennis' them of "Black Excellence" soared to more than 80 thousand likes and 20 thousand retweets.

"I love her theme, I love everything, and part of me wishes that everyone in NCAA could get that type of recognition because there are so many people doing just as good as she is and they're not quite getting the recognition," Brown said. "I think just one person getting that recognition first is a step but it slightly seems as though one person is in the spotlight and that sort of 'meets the quota.'"

Brown is ensuring that a 'quota' system isn't used for recruiting at DU, by speaking specifically to the coaching staff about ways to promote diversity on the team.

"I know I've talked to my coaches and they're making a conscious effort to make sure that we're very inclusive and they're recruiting people," she said.

The school previously recruited many "legacy" athletes, as well as former Olympian's children. However, in conversations with the coaches, Brown says they're now looking at the skills of individual athletes, rather than their background.

"I'm really happy to be a part of a team that values that and wants to make a change," she said.

Brown is also quite optimistic about the future of the sport, but it starts at the youngest level, she says.

"It starts with the love of the sport and then partially, it's up to us who are in these positions. When we were allowed to have fans and do autograph signings, making sure that regardless of the color of the kid or the identity, I am letting the kid know that you can do whatever you want to do," she said. "Making sure that those of us who are in these inspiring roles are connecting with the young kids to keep them motivated because some of them might be discouraged by how little representation they have."

Athletes, such as Brown, felt a renewed personal responsibility to be role models for not only the younger generation, but now also for their peers. After the protests surrounding both George Floyd and Breonna Taylor's deaths this past summer, the Black Lives Matter movement rose to prominence in the sports community. Brown said she's happy that the conversations have begun again, but hopes they won't fizzle out just as quickly.

"We tried to make space for that, not only as a team, but as a school, and in the athletic department on campus. I think moving forward, I just hope that it doesn't drift away because it comes in waves," she said. "The first one I remember was Trayvon Martin and being from Missouri, the Ferguson incident. As a black person, you're seeing these patterns and I hope that this last one seemed a little bit different in that it stayed in people's minds and that it's something that we continuously advocate for."