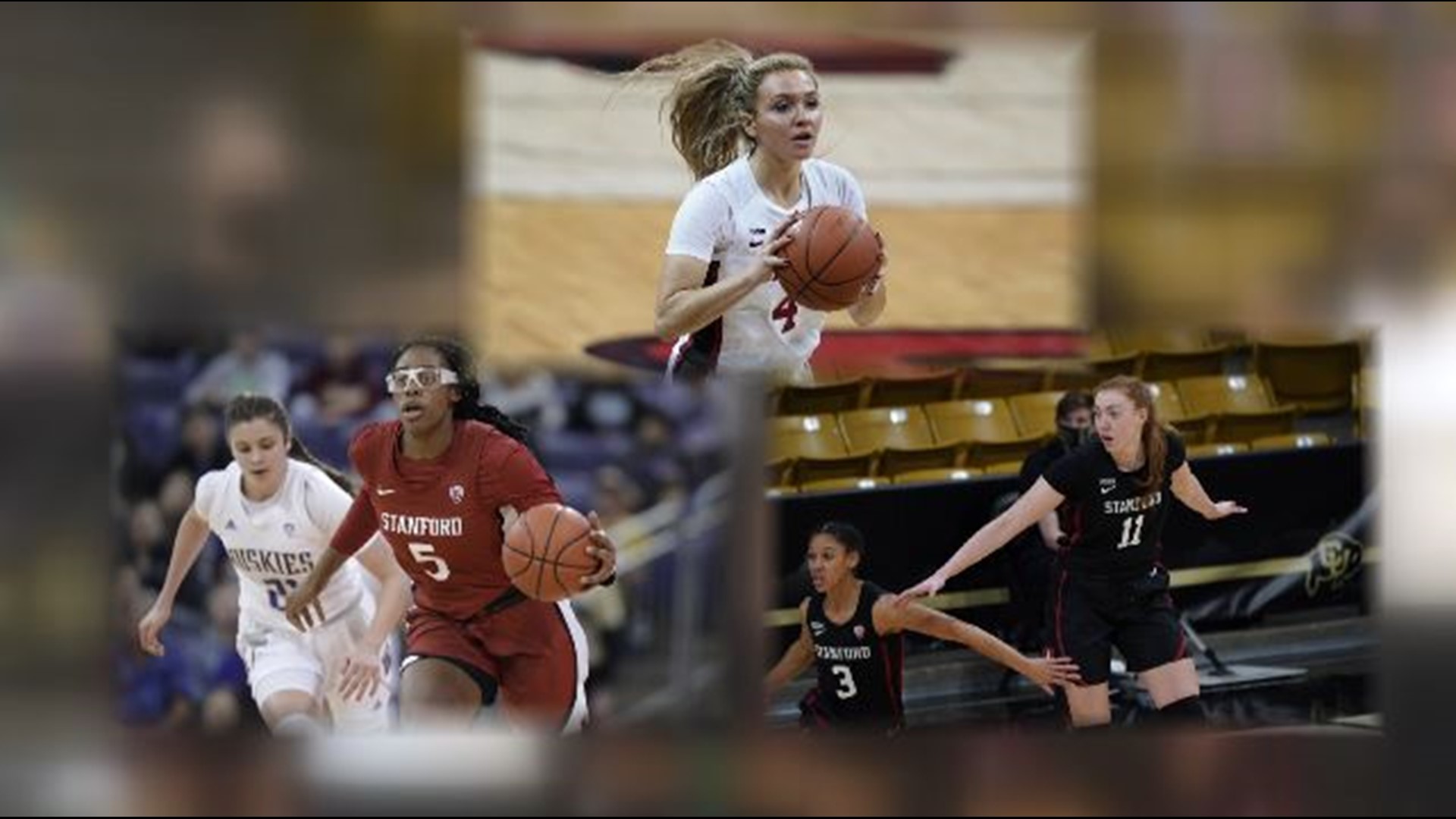 BOULDER, Colo. — The Stanford women's basketball team touched down in Denver and checked into a hotel in Boulder. Home sweet home, for a team that hasn't had one for most of their season.

"It's been weird that we don't get to play home games anymore and that we're constantly on the road," sophomore Ashten Prechtel said.

The entire athletic department is stuck in this predicament. Stanford relocated its training and competitions in late 2020, after the Santa Clara County Public Health Department’s Nov. 28 emergency directive to temporarily ban all contact sports at all competition levels.

For three Cardinal players, the Events Center is as close to home as they can get.

"Being home is always nice, just stepping off of the plane and taking that breath, like 'okay, we're in Colorado,' like, we're home," Fran Belibi said. "It's not the same, but it's still great to be back in Colorado to see our families and stuff."

The sophomore forward is playing her second game in Boulder after graduating from Regis Jesuit in 2019.

"It's just way different with no fans compared to last year when half of the fans were there for us," she said.

The first outing only had two Coloradans: Belibi and Prechtel, from Discovery Canyon. They added their third member before the second visit.

It's no coincidence that the top Colorado talent is all thriving with the Cardinal, it as a calculated recruiting effort.

"I committed as a sophomore during winter break and I was recruiting Ashten and Fran to come with me," freshman Jana Van Gytenbeek said.

The Cherry Creek alum was a five-star recruit and the 11th best in the nation at her point guard position. She was also the 2020 Colorado Gatorade Player of the Year.

Belibi's recruiting process was a bit different. While she was also a five-star recruit and the third-best at her position, she didn't allow coaches to contact her...she contacted them.

It only took one phone call during an inconvenient time before Belibi's mother intervened. They created a website where coaches could fill out an inquiry and the Belibis would call back at a time that was convenient for them. But there was no way to turn off the intricate recruiting process on the court.

"Jana committed before I did and I remember playing Jana and she was like, 'You need to come to Stanford!' and I was like, 'Maybe!' Then I committed and afterward, we had a USA tryout and there were like six of us. It was like Haley (Jones), Cam (Brink), me, Jana, Ash, and me and Jana were like, we need to get some of these people to come to Stanford. So we just started talking to everyone and I definitely remember us being like, 'So Ash, you're looking at Stanford?' and she was like 'Yeah,' and we definitely didn't know each other," she said about their network.

"And definitely Haley too. We called ourselves 'Franny Janny Hanny going to Stanny," Van Gytenbeek said.

"But I think that's what got them, really. It had to be that," Belibi laughed.

Three wasn't a crowd; it was just the beginning. The number one-overall recruit of the 2022 class is also joining the trio. Grandview junior Lauren Betts had her choice of pretty much anywhere, but had her heart set on Stanford and playing alongside some of her former foes.

"It just makes me more excited. I'm just counting down the days until I can play with them," she said. "Knowing that there's going to be people from home on that team, makes me feel so much more comfortable going there and I'm just so excited."

There's some serious history and animosity between Grandview and Van Gytenbeek's alma mater Cherry Creek. In fact, the two were unable to settle the score this past March, when the rubber match 5A championship game was canceled.

"It's really funny actually because we did have a huge rivalry. We did not like playing against each other," Van Gytenbeek said. "We're two really tough competitors and really competitive and so sometimes our competitiveness would get in the way, but now she's going to be my teammate and that's amazing."

Belibi only played two games against Betts in her tenure with Regis Jesuit, but she knows what she'll be up against when she joins the team in two years.

"In my experience, it's better to play with her than against her," she said.

Prechtel played in the same AAU organization with Betts, so she was excited to help recruit her to the West Coast.

"I'm super excited that she committed to Stanford and it's going to be great to have more people from Colorado," Prechtel said.

With a state championship each under their belts, Van Gytenbeek and Betts know what it takes to be a winner, but what about the pressure of potentially becoming an NCAA National Champion?

"It's insane first and foremost, but it's also really cool that we get to inspire people, but we also have this huge target on our backs," Van Gytenbeek said. "It makes us play a little harder and practice a little harder."

Betts still has two years before joining the formerly number one Cardinal team, but she knows what she needs to do to play up to their level.

"I'm willing to do whatever the coaches want me to do that and I'm just really excited to get there and learn from all of the other girls and hopefully win a Natty with them," she said.

Stanford fell to Colorado on Sunday January 17, earning their first and only loss of the season.