Football practice returns to some high schools with extra caution

Westminster High School is leading the way with its own phases of reintroduction back to fall sports. The school emphasizes both safety and reconnecting. 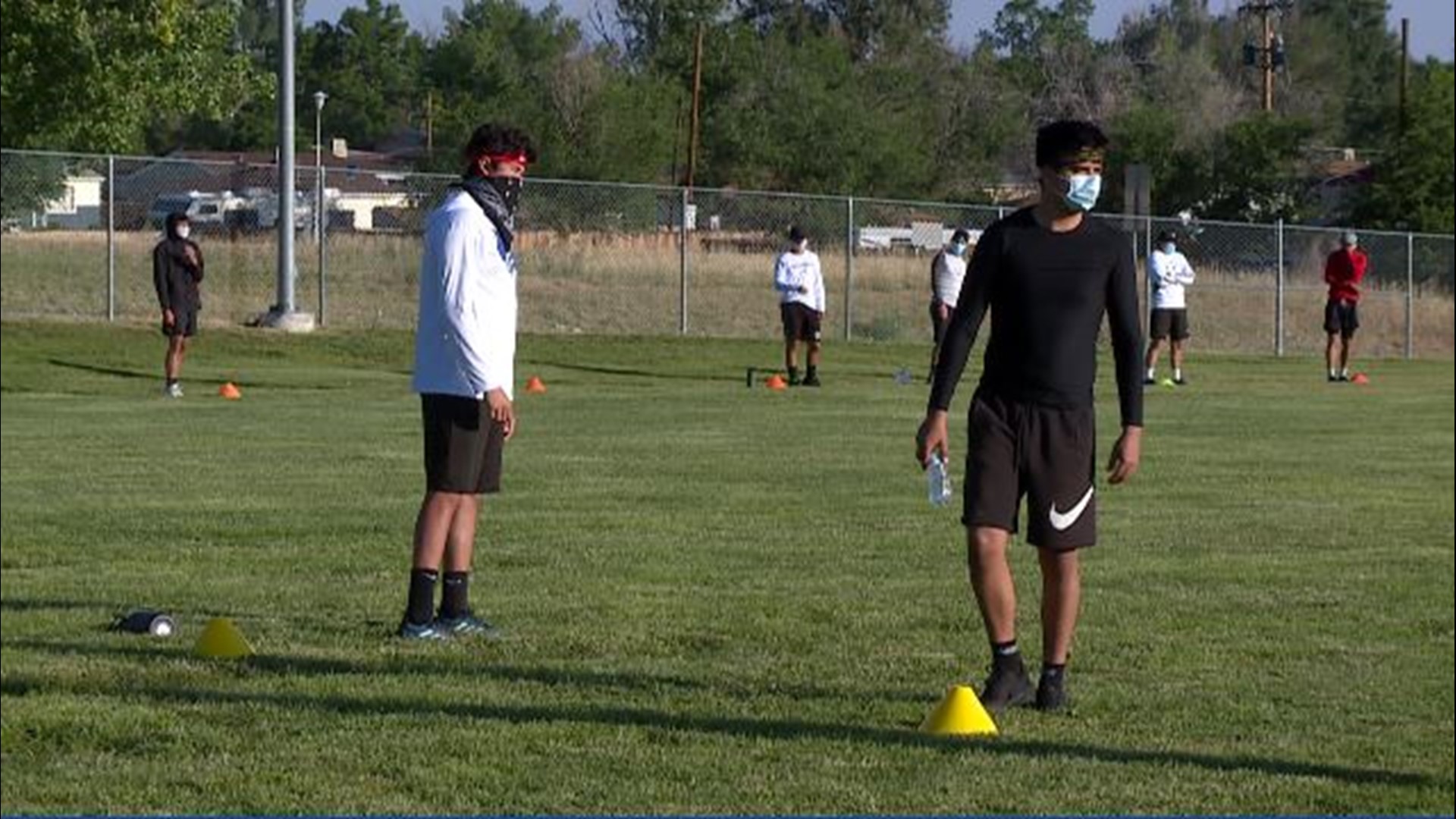 WESTMINSTER, Colo. — Even without any pads, sleds, or hitting, it's still clear that football practice is back in Colorado. CHSAA is allowing individual school districts to determine practice dates based on state and county guidelines. Westminster school district was one of the first to get back on the field distantly.

"It was almost a relief," Athletic Director Jesse Hernandez said. it was like everybody had taken a deep breath. It was just amazing to see the kids, it was amazing to see the coaches interact with the kids. It brings back something they can rely on day in and day out."

They can also rely on the safety measures taken by the school district. Westminster specifically used guidelines provided by the National Federation of State High School Associations (NFHS) along with state guidelines to create three phases of reintroduction. Student-athletes are required to check in with their group upon arrival and take their temperature. Anything higher than 100.4 is required to leave immediately.

Hernandez believes they took measures further to ensure safety to all involved.

"We implemented a little bit more so our students are safe and our coaches are more safe. We took the extra precaution by putting the hats on and the long sleeves and during phase one, they also had the gloves on to make sure that no sweat was getting on anyone else and just an extra precaution to make everybody safe," he said.

The head gear and long sleeves were required by all athletes during phase one to prevent sweat from leaving one's body. While coaches from other sports are welcoming Phase 2 and the ability to lose the sleeves and hats, the football team is embracing the safety measures set forth by the district and is choosing to stay partially in Phase 1. For instance, the masks are no longer required on the field, but the football team insists on wearing them whenever possible.

RELATED: CHSAA focused on starting all sports during 2020-21 year

Gilbert Bujanda IV is entering his fourth training camp with the Wolves and certainly notices the differences in his final off-season.

"It was really weird at first having to wear our masks, wearing long sleeves in this heat and not being able to hit the weights," the senior tight end/defensive end said. "That's the main thing, we all miss the weight room and being able to hit our max."

Student-athletes are split up into pods of 10 players per coach and will remain in that same pod throughout the entire training camp to help with contact tracing, if necessary.

While strength training and actual football drills are taking a backseat at the moment, Hernandez emphasized the importance of getting kids off of their couches and back onto the fields.

"We really had to emphasize the importance of safety number one and then reconnecting with our students was the most important thing we could do right now," he said. "We really felt strongly as a district that being out here with us was the safest place for them, even if it was only for a half our or an hour each day."

Westminster is in phase two of its implementation, with phase three of full practice planned to begin in July. At this point, Hernandez said schools are being told to prepare as if a season will be held normally in the fall, but Bujanda knows it might look a bit different.

"This season there's going to be less fans in the stands which sucks because we do it for the fans in the stands and the student section that give us that energy to go out there and give it our all," he said. "It's definitely going to be different this year. Hopefully we'll just get to go out there and do what we love, as many fans as there is, but hopefully there's not that limit to it."