After finishing last season as the state runner-up, the Lakewood girls' basketball team is once again a favorite in the 5A classification. This year, however, it's become even more obvious the two main reasons why the Tigers have been able to tower above the competition. Meet the Emsbo twins. 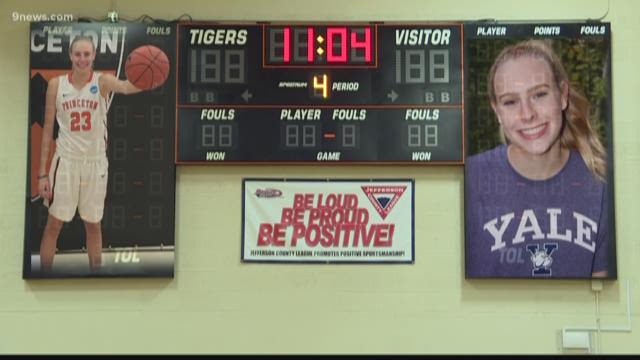 After finishing last season as the state runner-up, the Lakewood girls' basketball team is once again a favorite in the 5A classification. This year, however, it's become even more obvious the two main reasons why the Tigers have been able to tower above the competition. Meet the Emsbo twins.

To the average person, Camilla and Kira Emsbo are hard to miss at 6-foot-4. College recruiters could say the same.

"We started playing club pretty late, so it did hit us both by surprise, and we weren't really expecting the level of interest that we got," Camilla said.

That's because up until middle school, the Emsbos were competitive soccer players. They started playing basketball around the 7th grade, and it wasn't until their sophomore year of high school that they began playing club.

Using each other as motivators to get better, their skills quickly evolved.

"It's definitely something that keeps you going and keeps you present, I'd say, to have someone there that's supporting you, but also pushing you constantly," Kira said.

"Just having someone to compare yourself to is a really difficult thing. It's just a built in motivator, like, you can't really take a day off if she's not because then you're the worse twin," Camilla added with a laugh.

With similar styles of play -- Camilla stronger in the paint, and Kira sharper outside (their words, not ours) -- the Emsbos quickly gained attention from coaches across the country.

"It was weird," Kira said of the recruitment process. "I wasn't even sure I was going to play college basketball."

But teams came calling, and in droves. While Camilla and Kira were recruited by some of the same programs, they prioritized making recruitment an individual process.

"We were each other's best resource because we had somebody exactly like us going through the exact same thing as us," Camilla said. "You can't understate how important that was. I think we both recognize we're really dependent on each other, and we're not going to spend the rest of our lives together. It's a really important time to branch out and really find our own paths, because that's when everyone else is finding their own path, too."

Both Camilla and Kira made their college commitments in the fall, and for the first time in their lives, they'll separate. That being said, they are identical twins and share the same DNA -- it's no wonder they made similar decisions.

"When given the option between a really academic school and a really basketball-based school, both of us made the decision to really prioritize academics," Camilla said.

"Academics are a priority, they always have been," Kira echoed her sister. "That's something instilled in us by our parents. That was something that was really important to us, and the Ivy League really provides that for us."

Kira committed first to Princeton. A few months later, Camilla announced she would be attending Yale. With high school playoffs just months away, the twins will be cherishing their final time together on the court.

"It's going to be a little sentimental, and I think freshman year will be tough, but we'll get used to it," Kira said. "It will help us in the long run."

"I think we both ended up pretty dang happy with where we're at right now," Camilla added.

With Yale and Princeton both in the Ivy League, Kira and Camilla will face each other twice during the regular season (no word on how mom and dad plan to handle those games).

Lakewood is currently ranked fifth in the 5A classification and holds a 7-3 record. Last year, the Tigers fell to Grandview in the state championship game.