Regis Jesuit took home the 2019 5A baseball state championship, after Jacob Thompsen threw more than four scoreless innings. They were poised for a repeat. 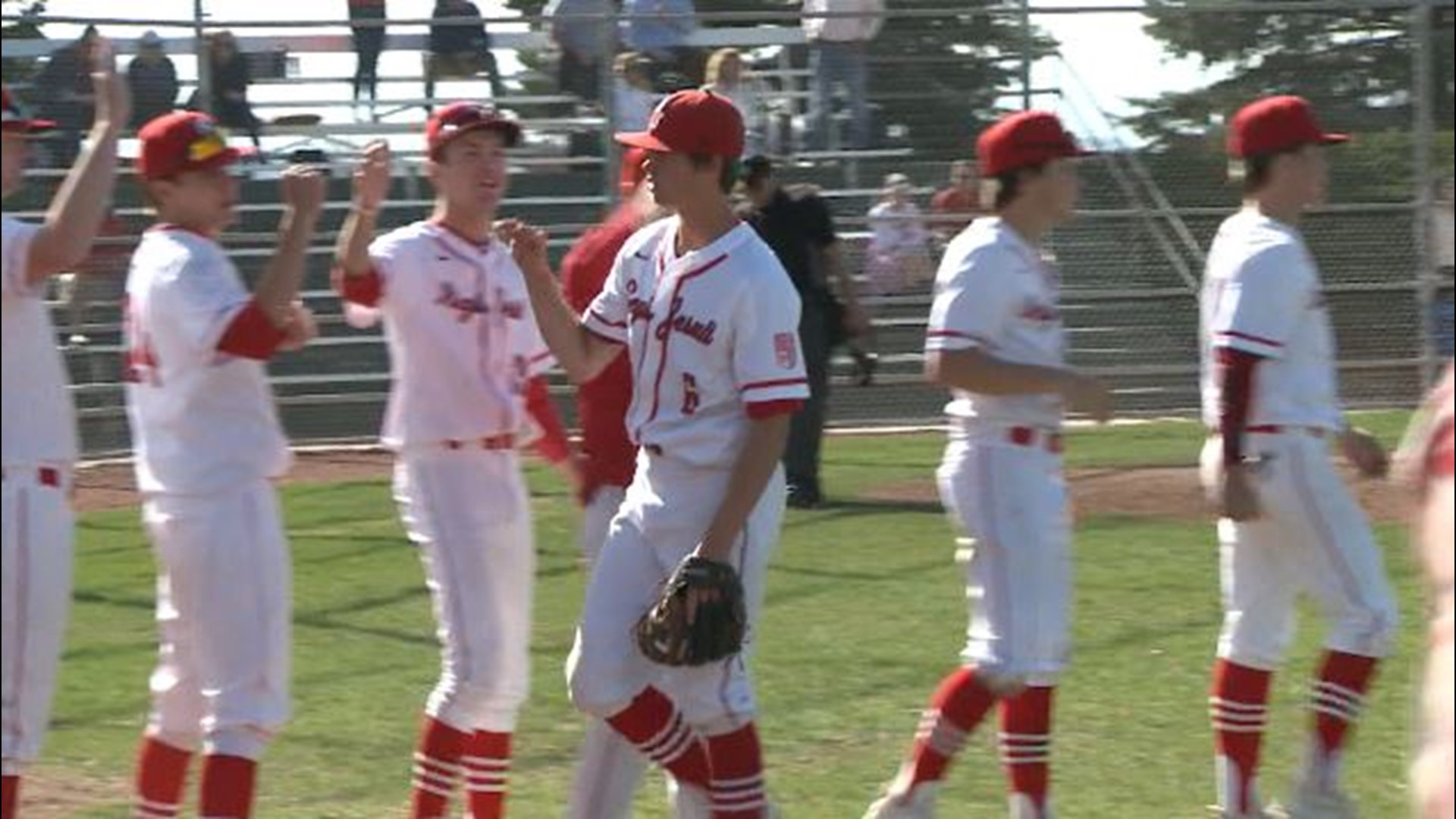 DENVER — Winning one 5A state baseball championship is tough enough, but to repeat, is nearly impossible. That's why it's only been done twice before in Colorado, first by Cherry Creek with five-consecutive wins from 1995-99 and four-consecutive wins by Rocky Mountain (2007-2010).

"You've just got so many variables with one good pitcher on a given day and it's just a really tough task," Regis Jesuit head coach Matt Darr said.

He told his team in the fall of 2019 that it would be nearly impossible to repeat what they did only a few months earlier, but they were on the right path to do it.

"They really embraced that and used that as a motivating factor because, not only did we want the challenge, but we felt like we had the group to do it," he said.

Jacob Thompsen was the starting pitcher for Regis when the Raiders beat Cherry Creek 8-3 last year. He went 4 2/3 innings and allowed just four hits with no runs. He was ready to take the team back there again this year.

No one would have a shot to earn the 2020 CHSAA 5A state baseball championship, after the season was canceled due to the widespread concern of coronavirus. While the Raiders will ultimately have the chance to repeat in 2021, Thompsen will no longer be with the team. Instead, he has the lasting memories of his favorite day on the diamond.

"I had so much adrenaline going into the game and there was a rain delay in the middle of the game and that kind of slowed everything down for a while," he said. "Usually, you wouldn't be able to go back after that long of a delay, but when I got back out there and started throwing again, I felt perfectly fine."

Darr said he was the ultimate big-game pitcher for the Raiders that season.

"The bigger the game, the better he pitched," Darr said. "He only threw about 17 innings going into the playoffs last year, then once the playoffs started, he threw 20 innings without giving up an earned run."

Thompsen was a dual-player, a short-stop most of the season, posting a batting average of .340. That landed him First Team All-State honors.

"Having him kind of in your hip pocket, where can play short stop all year but then knowing he can pitch for you a lot when we get to the playoffs [was key]," Darr said. "When he was on the mound, I think we thought we were going to win."

And the win gave Regis its first state championship since 2011, and its third in team history. While that was Thompsen's favorite memory on the diamond, his favorite memory of his four years came during a service trip to the Dominican Republic.

"We built some of the smaller kids a mini baseball field to play on because they don't have a lot there," he said. "It was just awesome being able to connect with them through baseball."

Darr said the team intends to return every other year.

"This was a good marriage because the Dominican is baseball, right? And this gave kids who love baseball from America an opportunity to go there and give them a common platform to serve," he said.

It's memories like these that Thompsen will take with him when he plays at Long Beach State next year. He said he'll miss his senior year, but knowing he still has four-plus years left on the field, is a relief.

"It helped a lot to know that this wasn't the end of my baseball career and I still have a lot to accomplish and a lot of goals for myself moving forward."