Brooke Jelniker has been assisting the Valor Christian girls basketball team for the past four years. Now, as a nursing assistant, she's helping in a COVID-19 unit. 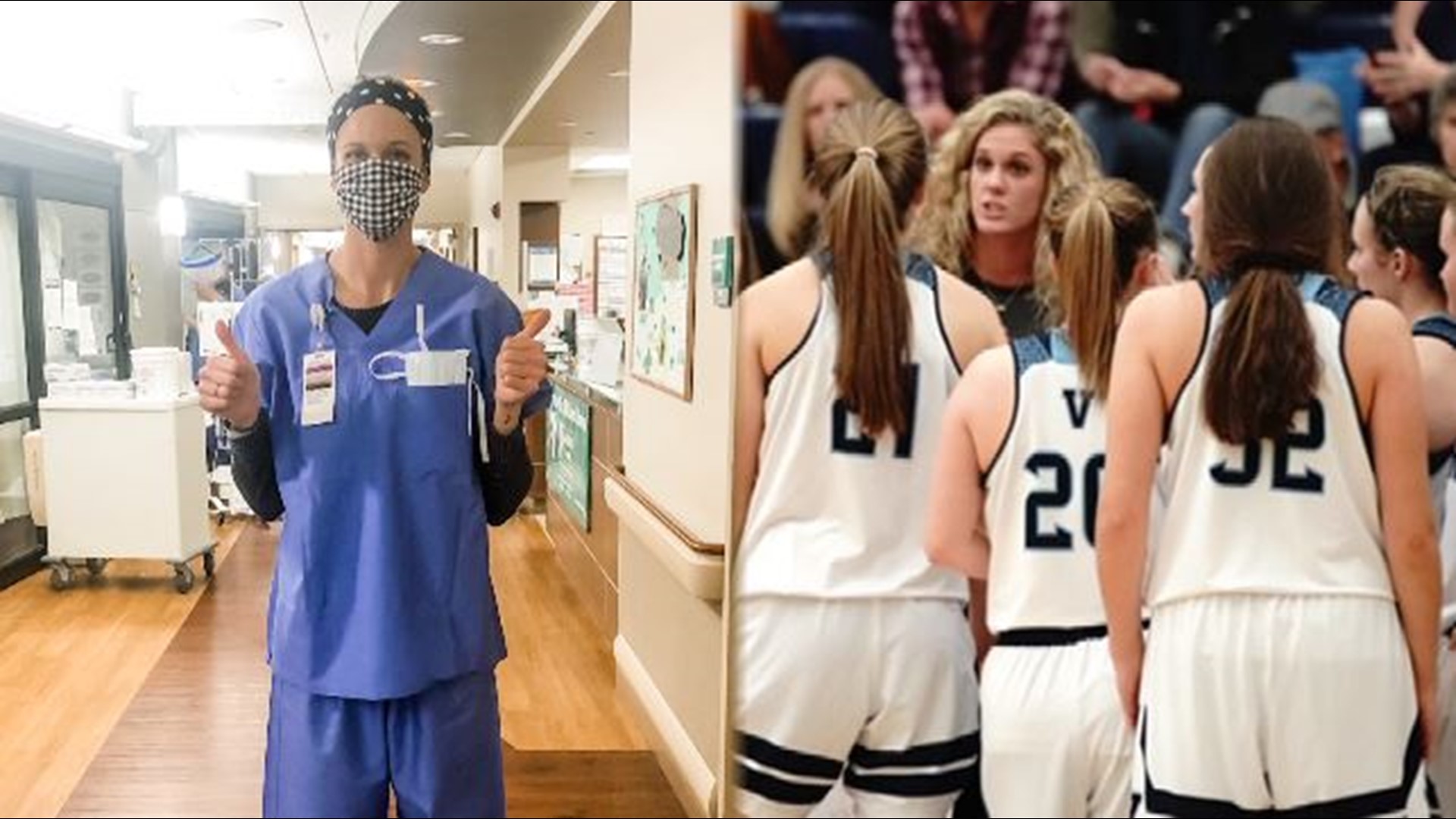 LITTLETON, Colo. — It's a radical change from coaching high school basketball and working sales, but Brooke Jelniker was ready to take on the challenge.

"I realized that nursing was what I wanted to do the first time around but I didn't have time in school," she said. "So I decided to go back and take a leap of faith and quit my job and here I am!"

Jelniker is a 2010 graduate of ThunderRidge High School, who went on to play Division I college basketball at the University of Kansas for one season and the University of San Diego for three seasons. She was hired as an assistant coach for Valor Christian High School when she moved back home to Colorado four years ago.

After a career that begin in sales and personal training, she's now through her sophomore year of nursing school and works as a nursing assistant in the ICU at Littleton Adventist Hospital. The ICU has been turned primarily into a COVID-19 unit for the time being.

"I see the worst of the worst of it. I see all of the intubated patients and just going in, it gets really exhausting," she said. "It's really sad just watching patients get really sick and honestly, not make it. There's a lot of patients in the ICU that honestly, aren't going to make it no matter what we do. There are a lot that get better, but there are a lot that pass away and they don't have anyone with them because no family can be in the room, so that's tough to see."

Jelniker is chasing her passion and says she's learning at an accelerated pace due to the high-volume of patients, but she said she also could use a break. She's hoping the next high school basketball season resumes as normal so she can head back to the sidelines of Valor Christian for her fifth season as an assistant coach, alongside Head Coach Jessika Caldwell.

"Honestly it's the best break in my day, from studying and staring at a book all day, to getting in a gym where I used to live," she said. "It's kind of just a good stress relief because [high school kids] are just goofy and weird and I do plan on going back."

A four-year Division I college basketball player, surely has a few tips to share with the next crop, but Jelniker said this new experience is giving her a new perspective to pass on.

"It's going to sound kind of cheesy, but oddly not taking any simple things for granted," she said. "I haven't been able to hug my parents in two months."

She also wished to pass along the perspective of learning oneself after the conclusion of sports.

"When I was done with basketball after college, I had no idea who I was or what I wanted to do, so I went into sales because everyone told me to," she said. "I'm trying to help these girls establish something outside of basketball because I thought basketball was life. [I'm] showing them that you can transition and you can do other things that you're passion about and you can find other areas where you have that same passion that you had for your sport."

RELATED: We want to highlight the nurses who have made a difference in your life