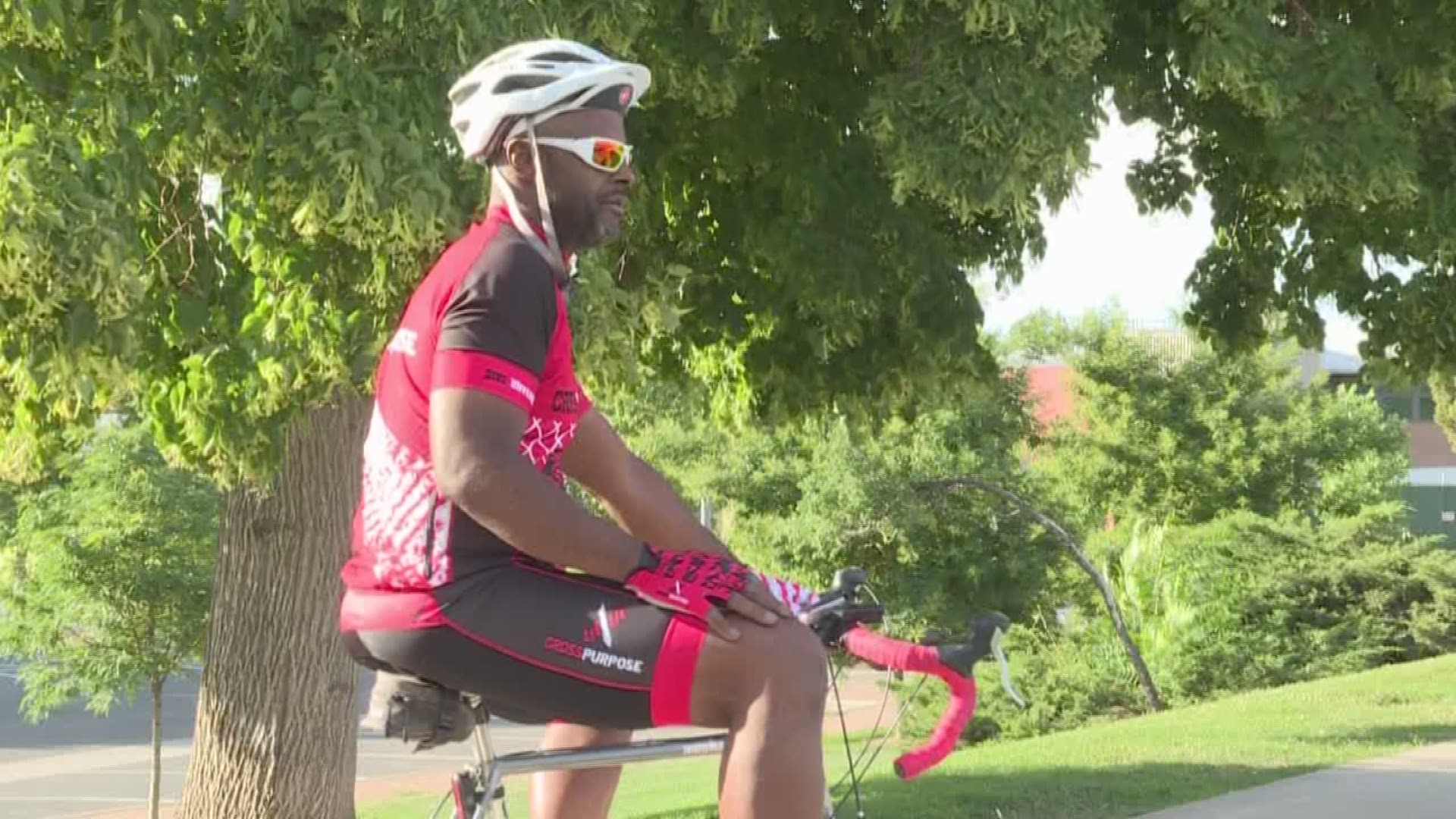 “I love the fresh air. The wind in my hair. I love the fact that I’m a mile high and I can grind.”

With a flash of red and black, Daryl York flies through the streets of Denver.

“I ride 20 miles a day, just commuting,” said the 46-year-old cyclist. “On the weekend, when I don’t have anything to do or I can’t go do anything, I just go ride anywhere and everywhere. I just love riding my bike.”

It’s a passion that formed out of necessity and it’s one that has carried him through the lowest points of his life.

A year and a half ago, the single father of three was in a car accident. Six months after that, he lost his job.

“I was still just feeling the world on top of me and it just wasn’t getting any better.”

With no money, no job, and no place to go, Daryl ended up homeless and hopeless.

“I was sick and tired of not having a job or a career and then being homeless at that? Like, no. Whatever it takes, hell or high water, I have got to get something better.”

The turning point came last fall when he crossed paths with CrossPurpose.

“Our mission is to abolish economic, relational and spiritually poverty through career and community development,” said CEO Jason Janz.

The Denver-based non-profit helps nearly 200 neighbors each year get out of poverty and into a sustaining career.

The program doesn’t normally assist with the homeless, but they made an exception for York.

“He really wants to make a different life, not just for himself but for his children,” Janz explained. “It’s what’s driving him and so we want to help him be the best dad he can possibly be but all we do is set the table, he’s really the hero.”

With the full support of CrossPurpose, Daryl enrolled at Emily Griffith Technical College to study welding.

Four days a week, he bikes the nine miles from Martin Luther King Jr. Park to campus. When he’s not in class, he makes his way back across town to Rare Finds, a furniture store in Stapleton where he works part-time.

Slowly, but surely, Daryl is finding his way back to stability.

“It’s a cycle and it’s a vicious one. Hopefully I’ll never come back to this point in my life ever again.”

In less than a month, Daryl will become an alumni of CrossPurpose. After finding a job, he hopes to save enough money to find a permanent residency. Until then, he plans to continue working forward while also helping others who are hoping to overcome homelessness through cycling.

This weekend, York and a team of 29 other CrossPurpose riders will take on the Triple Bypass, a 120-mile endurance ride across Juniper, Loveland, and Vail Pass.

“And he jumped up all over it,” Janz said with a laugh. “We’ll see what happens this weekend but he’s pretty pumped and he’s trained and he’s ready to go.”

CrossPurpose teamed up with Bikes Together to help raise money to buy York a new road bike and some fresh gear for the challenge.

“They say that this ride is harder than the Ironman ride,” York explained. He admits he’s nervous but excited to take on the course.

“It’s just one of those things, it’s mind over matter. If I can do all of the things I’ve done so far, the mountain shouldn’t be that bad.”

Daryl's Ride will raise money for four future students in the CrossPurpose program. To sponsor York or to find out more information about the program, go to CrossPurpose.org.