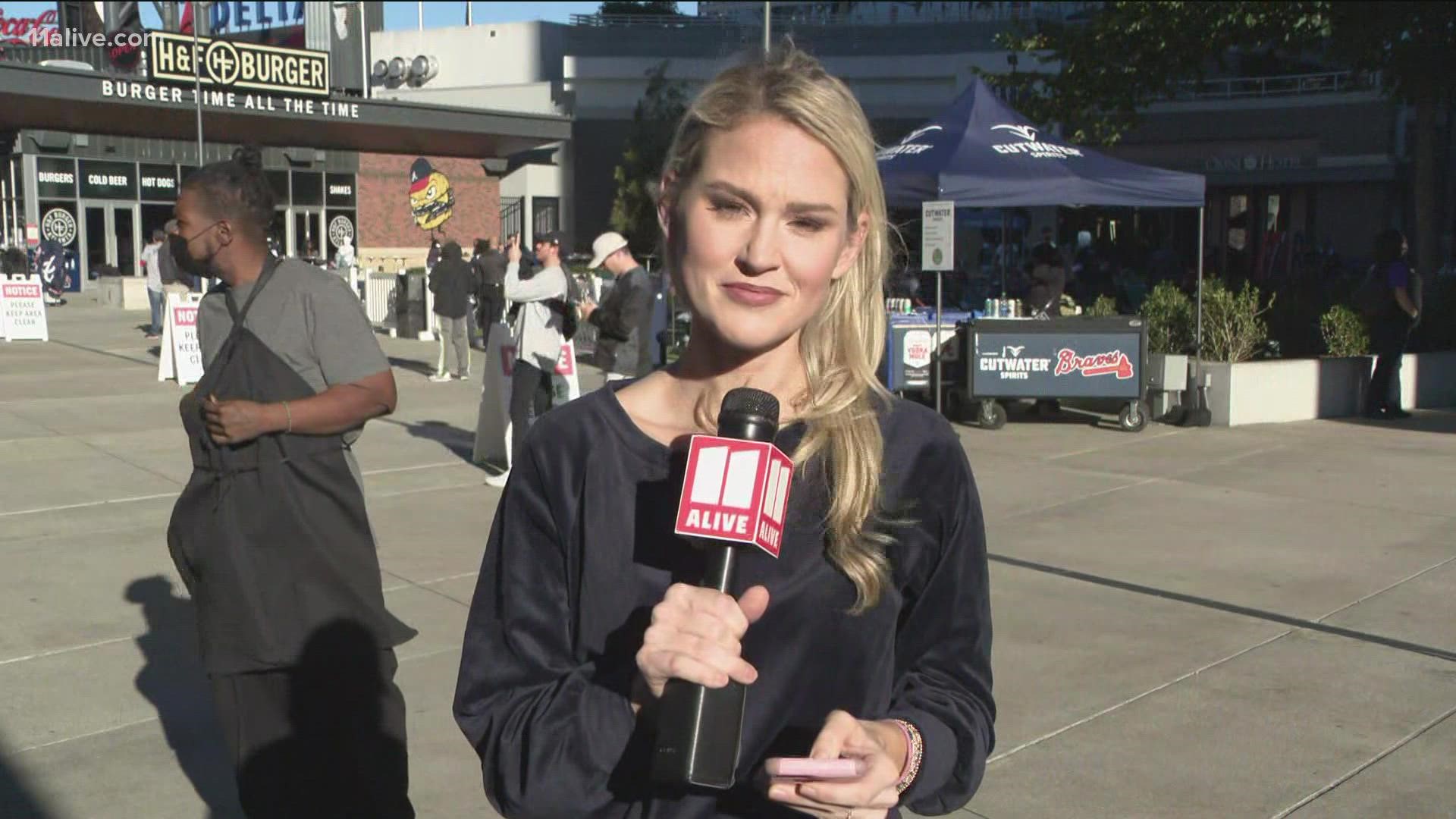 HOUSTON — The Atlanta Braves are in Houston Tuesday night, as they begin their chase for their first World Series title in 26 years.

The game began just after 8 p.m. ET, with Charlie Morton pitching for the Braves against Houston starter Framber Valdez.

It's a momentous occasion for Atlanta, which last saw a World Series appearance in 1999. The Braves had to beat the fearsome Los Angeles Dodgers to get to this point - and had to overcome the ghosts of last year, when they blew a 3-1 lead in the NLCS to L.A. and missed out on the World Series.

That spawned the #KillTheNarrative rallying cry - which will return for the World Series, with the Astros considered fairly strong favorites over the Braves.

As the Braves take the field in Houston, we will be tracking the major developments of the night in this article.

Note that this is not meant to be structured as a live blog, exactly - for true live updates we would recommend the Twitter feeds of our reporters Maria Martin and Reggie Chatman - but rather a space for the biggest moments and highlights that occur tonight.

You can find our updates below:

Game 1 is Atlanta's, with Will Smith closing the door on a 6-2 win. Game 2 is tomorrow night at 8 p.m. with Max Fried taking the mound for Atlanta.

For the first time since 1996, the @Braves have won a World Series game! pic.twitter.com/xzJpFWCWpT

A misplay in the eighth got Dansby Swanson to third, and a sacrifice fly brought him in to make it 6-1 Braves.

Luke Jackson, who notably struggled through two rough NLCS appearances, worked a solid scoreless sixth inning for the Braves, striking out two with one hit allowed. It remains 5-1 Braves.

Out of another jam, but bad news on Charlie Morton

Dansby Swanson muffed a potential double-play ball at shortstop, but A.J. Minter bore down and got out of the inning with just one run coming across for Houston. It's now 5-1 Braves.

That's the good news. The bad news, which the Braves just tweeted out, is that Charlie Morton is out for the rest of the World Series:

RHP Charlie Morton underwent X-rays tonight that revealed a right fibula fracture. He will miss the remainder of the World Series and is expected to be ready for Spring Training in 2022.

Unfortunate development for the Braves, as starting pitcher Charlie Morton is already done for the night with an apparent injury. A.J. Minter is coming on in relief.

Charlie Morton is leaving the game in the 3rd inning after he came up in pain after a pitch. pic.twitter.com/ZYiJ13fSZ8

Adam Duvall crushed a two-run shot to make it 5-0 in the third inning. The Braves are now the first team to score in the first three innings in Game 1 of the World Series.

Duvall with a ROCKET to LF 😳@Braves lead 5-0! pic.twitter.com/h5uZjt85JM

Out of a jam

Braves' starter Charlie Morton got into a bases-loaded jam in the bottom of the first, but managed to get out of it and maintain Atlanta's 2-0 lead:

America will get free tacos from Taco Bell on Nov. 4 after Ozzie Albies was able to steal a base!

Thanks to that steal by @ozzie, America gets free @TacoBell tacos on 11/4! pic.twitter.com/7syPgntxoa

Home Run for The Braves!

Way to go Braves! Jorge Soler was the first player to hit a home run in the first plate appearance of a World Series. Check out the play below.

Jorge Soler is the first player to hit a HR in the 1st plate appearance of a #WorldSeries! pic.twitter.com/gorrGsPQh4

Singer and actress Keke Palmer sang the national anthem during Game 1. After the performance, people started to react immediately on social media.

Check it out here.

Here's a reminder of what you need to know before first pitch:

Atlanta's Game 1 starter is Charlie Morton. And here's the lineup: