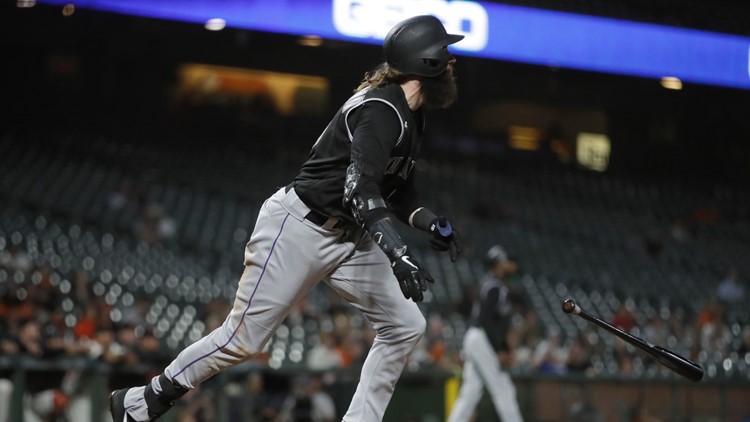 SAN FRANCISCO — The Rockies and Giants combined to use a major league-record 25 pitchers, and Colorado finished off San Francisco 8-5 early Wednesday morning when Charlie Blackmon hit a three-run homer in the 16th inning.

Blackmon's first hit of the night came in his eighth plate appearance and off Dereck Rodriguez (6-10) for his 31st home run.

Both clubs left the bases loaded in the 11th, and Colorado stranded 15 baserunners.

Sam Howard (2-0) pitched the final two innings for the win.

With the Cardinals and Diamondbacks also going long, it marked the first time since June 8, 2013 - Mets-Marlins and Blue Jays-Rangers - more than one game went at least 15 innings the same day, according to MLB Stats.

Evan Longoria hit a tying homer in the eighth off Carlos Estevez. Longoria became the third Giants player with 20 homers, and for much of the game the ball carried on an unseasonably warm late-September night. First-pitch temperature was 78 degrees.

Garrett Hampson hit his second homer of the game to put Colorado ahead in the eighth after losing starter Jeff Hoffman to a knee injury from a line drive, but the Giants kept pushing.

Trevor Story connected for his 34th homer after a pair of strikeouts to begin his night against Madison Bumgarner, who might have made his final start for San Francisco, though he was still scheduled to pitch Sunday's season finale. Bochy hinted there still could be a change.

Bumgarner drew big cheers as he walked to the mound to start the game, then struck out nine and walked two over seven innings, allowing four runs on six hits.

Hoffman took a line drive off his right knee in the fourth inning and was carted off the field. Alex Dickerson's sharp single hit squarely on Hoffman's knee and the pitcher went down writhing in pain, and the ball ricocheted toward San Francisco's dugout. He was down a little more than five minutes as athletic trainers from both teams tended to him on the mound.

Buster Posey hit a two-run homer in the bottom of the first for just his seventh home run and first in 123 at-bats since July 31 at Philadelphia. Bumgarner added a homer of his own but the lefty remains winless in five starts since beating the Padres on Aug. 30. The Giants have lost his last four outings.

Ian Desmond hit a two-run homer in the fourth after Bumgarner hit Blackmon on the left hand area with a pitch to start the inning.

Bochy began what he knows will be an emotional final week on the dugout's top step. Fans stood and cheered when his picture showed on the big scoreboard during pregame introductions.

"It's going to be tough to say bye," Bochy said.

Bumgarner is slated to start again on the season's final day at home against the NL West champion Dodgers. Yet Bochy said before the game he didn't want the 2014 World Series MVP to feel obligated to start the manager's send-off game - though Bochy also would like this last week to finish on a winning, positive note for everybody involved.

Story homered against the Giants for a franchise-record sixth straight game and became the first Colorado player to do so against any opponent over six matchups in a row. Mike Schmidt (1979) and Rogers Hornsby (1922) each homered in five consecutive games vs. the Giants. Andres Galarraga homered in five straight vs. St. Louis in 1996.

"He's a special individual," Torre said after greeting the manager on the field.

A video tribute from Torre played on the big screen before the fourth inning and Torre said, "You're a class act and I admire how you go about your business."

Giants: Bochy was unsure whether RHP Johnny Cueto will make another start this season. Cueto (1-1) has made three starts spanning 14 innings since returning from a 13-month absence recovering from Tommy John surgery. His next turn would be Friday in the series opener vs. Los Angeles.

RHP Tim Melville (2-3, 5.40 ERA) makes his seventh start of the year and the first of his career against the Giants having gone 2-0 with a 2.13 ERA in two road starts, beating NL West opponents Arizona and San Diego. RHP Jeff Samardzija (11-12, 3.64) has won two of his last three starts vs. Colorado and tries to match his career high of 12 wins accomplished in 2016 during his first year with San Francisco.