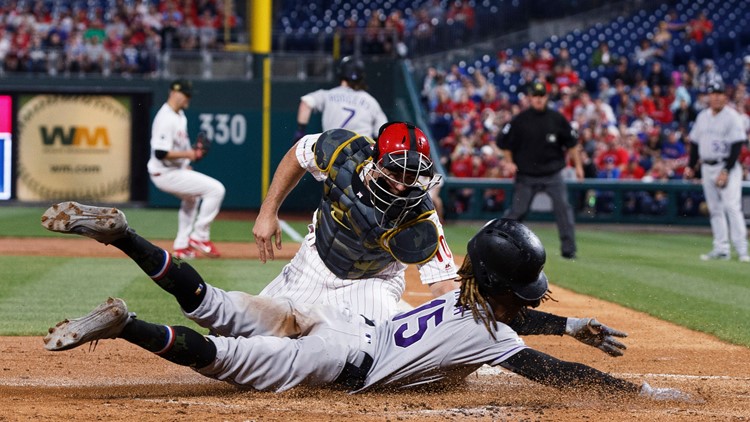 Irvin (2-0) gave up four runs - three earned - and five hits to win his second career start. Jose Alvarez and Pat Neshek each tossed a scoreless inning and Hector Neris finished for his sixth save in six tries.

Cesar Hernandez followed J.T. Realmuto's two-out double with a double down the left-field line, giving the Phillies a 3-2 lead in the fourth.

Harper's double made it 5-2 in the fifth. Gray retired the first two batters before walking MuCutchen and allowing a single to Jean Segura.

Carlos Estevez replaced Gray and surrendered Harper's first RBIs since he hit a grand slam on May 7. Harper had been 4 for 29 with 15 strikeouts before the hit. He heard boos after striking out in his first two at-bats.

Desmond connected in the sixth to get the Rockies within a run but Philadelphia's bullpen preserved the lead.

Irvin helped himself at the plate by drawing a 10-pitch walk in his first big-league at-bat with two outs in the third. His first start came at Kansas City. McCutchen followed with a blast out to left-center to tie it at 2-2.

Irvin committed two fielding errors in the second and the Rockies took a 1-0 lead on Brendan Rodgers' fielder's choice grounder.

Charlie Blackmon led off the third with a double and scored on Mark Reynolds' double to make it 2-0.

Rockies catcher Tony Wolters threw out two runners, McCutchen and Segura, trying to steal second base in the first inning.

Rodgers, the team's top prospect, was called up from Triple-A Albuquerque and played second base, batting seventh in his first game in the majors. The Rockies optioned right-hander DJ Johnson and infielder Pat Valaika to Albuquerque and activated left-hander Jake McGee from the 10-day injured list after he recovered from a sprained left knee.